Rise and shine: Hogs get another shot to impress 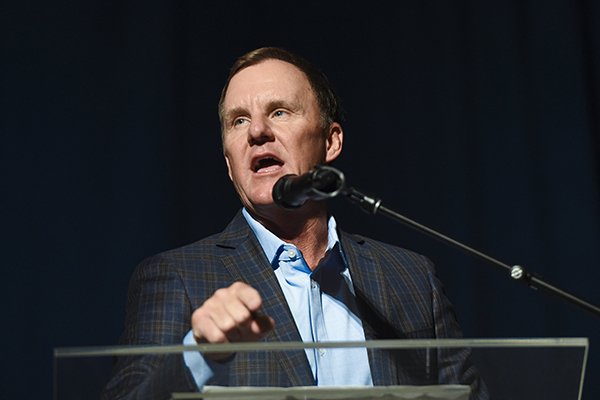 ROGERS -- University of Arkansas Coach Chad Morris had some fun with the crowd of close to 900 at the annual Razorback football kickoff luncheon at the John Q. Hammons Convention Center on Friday.

While giving fans a rundown of the Razorbacks' roster, Morris specifically mentioned starters at several positions on defense, such as McTelvin Agim and T.J. Smith at defensive tackle, De'Jon Harris at linebacker, safeties Kam Curl and Joe Foucha, and cornerbacks Montaric Brown and Jarques McClellion.

Then Morris got to the quarterbacks.

"We're excited about the quarterback room, because we all know the difference in a year, everybody in that quarterback room gets better and we're seeing that," Morris said. "It's exciting.

"I'm not going to name a starter right now as you were hoping that I'd do. So you can relax and take another drink of tea or water."

Not that anyone was expecting Morris to make that call 15 days ahead of the season opener against Portland State on Aug. 31.

Graduate transfers Ben Hicks and Nick Starkel have taken the most amount of work with the rest of the starting unit, and the choice Morris and offensive coordinator Joe Craddock will make is likely to boil down to either the senior Hicks or the junior Starkel over redshirt freshman John Stephen Jones and true freshman KJ Jefferson.

Another big test will take place today during the Razorbacks' second full scrimmage of camp. The workout, the 15th of training camp, will take place on the practice fields outside Walker Pavilion and not on the week-old natural grass field at Reynolds Razorback Stadium as Morris had hoped.

The scrimmage is closed to the public and the media, but family members will be on hand as will a big array of former Hogs who have been invited to the annual former player's barbecue instituted by Morris.

Among them will be two-time All-American tailback Darren McFadden, who attended the kickoff luncheon and received a big round of applause.

Morris referenced the new "McFadden era" throwback jerseys the Razorbacks will be wearing this season.

Morris mentioned on Wednesday that today's scrimmage will not be as comprehensive as the 175-snap scrimmage last Saturday.

"We'll go well in excess of 100 plays, but we've got it kind of by design more situational. I want to see what we do in first down play, second down, and we've got a lot of red zone work this week. Short yardage work this week and that will all carry over to Saturday in the scrimmage as well."

The scrimmage is one of the last chances for players to move up or down the depth chart and not just the quarterbacks.

"We are only as good as our back-ups," defensive backs coach Ron Cooper said. "A lot of guys are wondering right now, 'Am I second team, am I third team?' I mean I've been 14 years in this conference, and you can't play the same two guys all year. Something is going to happen. You really can't play it with four.

"The depth is important, so this scrimmage will show a lot of the young guys for the second week in a row, some played 50 snaps last week, will play 50-60 more this week before they try to take the field."

Morris said last week that as much as 65 to 70 percent of his playbook has been implemented, and offensive line coach Dustin Fry said the scrimmage will be pretty comprehensive.

"We want to see everything we have in protection wise and just be consistent and show we know what to do," Fry said. "I know we're going to make some mistakes, but as long as we're making them full speed. ... I know we're not going to be as fresh as we were on day one, but I want to see us push. I want to see guys that may have to play with the ones but haven't been, I want to see them step up."

Seniors Colton Jackson and Austin Capps, the projected starters on the left side of the offensive line, are likely to be out, meaning Myron Cunningham and Kirby Adcock will take plenty of snaps with the first unit and players behind them will be moving up.

Also questionable for the scrimmage are nickel back Greg Brooks (hyperextended thumb), and tailbacks T.J. Hammonds (concussion) and A'Montae Spivey (ribs), who were slowed during the week.

"We've got some different scenarios I know that coach is going to work, so I just want to see and continue to progress," he said. "If they're making the same mistakes they made last Saturday, then you know that the progression is a little bit slower. But hopefully the mistakes they made a week ago, they don't make those this week and they learn from them."