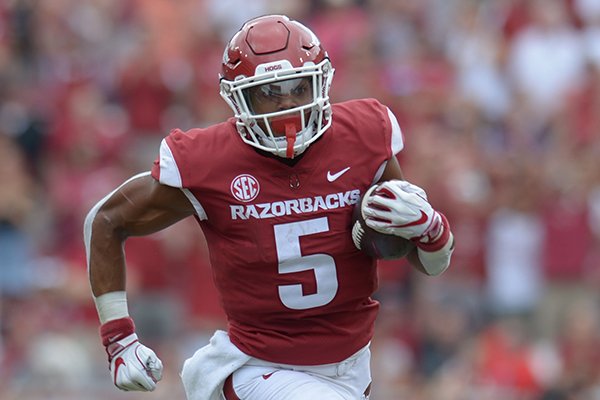 Arkansas running back Rakeem Boyd carries the ball against Alabama Saturday, Oct. 6, 2018, during the second quarter at Razorback Stadium in Fayetteville. Visit nwadg.com/photos to see more photographs from the game.

Not that the running backs were a weak link during last year's struggles, as the top four backs combined for 1,497 rushing yards. But the Hogs averaged just 143.4 rushing yards per game, a figure that was ahead of only Tennessee (129.1) in the SEC and nearly 100 yards per game behind Georgia's league-leading 238.8.

Traylor, the second-year running backs coach, thinks the finer points of the scheme will come more naturally to the group, led by Rakeem Boyd, Devwah Whaley and Chase Hayden.

"Last year, we were just trying to get the install in," Traylor said. "We weren't really good at the details of it.

"You can just go back and watch our games. Our track steps were all over the place, there was no consistency. We're just really trying to clean up the details of our work."

On the plus side, Arkansas backs lost just two fumbles last year -- one by Boyd and one by Hayden.

The run game was relatively productive in Saturday's scrimmage, with Boyd hitting a crease for a long gainer and Hayden scoring a touchdown in the closed workout.

Boyd is 100% after undergoing surgery to repair a torn right rotator cuff and labrum. The transfer from Texas A&M via Independence (Kan.) College emerged last season during a four-game stretch in which he racked up 423 yards against Alabama, Ole Miss, Tulsa and Vanderbilt, including 102 against the stingy Crimson Tide. Boyd wound up with 729 rushing yards and a healthy 6.2 yards per carry as a sophomore.

Hayden has scored touchdowns in both camp scrimmages, which is something the tailbacks need to do a lot more of this fall.

Arkansas Coach Chad Morris said the running game will pick up the pace.

"We expect it to take a big step forward," Morris said. "If anything, we should be more effective in the passing game, which should open up the run game better. We've got some very talented running backs.

"I think Devwah Whaley has had a great camp. Chase Hayden is really catching our attention, as well. Obviously, we know Rakeem.

"We want consistency out of Rakeem, and we've seen that. With those caliber of running backs we have and developing our offensive line, that's an area that we expect to see better production out of."

Boyd took his game prep up a notch by spending time watching film with the offensive linemen to further study the intricacies of the blocking schemes and rush lanes.

Boyd, Whaley and Hayden have all shown the capacity to be a lead tailback.

"We're trying to get every one of them ready, but when the season plays out, we feel very comfortable playing three backs," Traylor said. "That's kind of the plan. That three is pretty established, those three returnees from last year who have done nothing to not make me feel confident going into the season."

The backs understand the rigors of playing in a physical conference mean they all will be needed.

"We're working together, you know what I mean?" Boyd said. "We know we're gonna have to lean on each other for the season because the SEC is big-boy ball.

"Coach [Traylor] said he'll play three, so we'll all be mixing in, getting in and out. It'll be fun, taking a load off each other."

Whaley said the running backs never know how the season will unfold or how the reps will be distributed.

"It's whoever's number is called," he said. "We're just going to go out there and give it all we've got, no matter who's out there, and carry each other on."

Behind the big three are junior T.J. Hammonds, a versatile option with open-field prowess, and true freshman A'Montae Spivey.

Traylor said he'd like to travel with four backs, and the fourth member should be a kicking game contributor.

"Special teams is very important," Traylor said. "Your fourth back should be on special teams."

The Razorbacks also have a dynamo waiting in the wings who has been a camp wonder, drawing praise from coaches and players. Trelon Smith can't join the running back parade this season after transferring in from Arizona State, but he can inspire them.

"He has gained tremendous respect from those guys," Traylor said.

Morris recently has been stressing the difference between "talent" and "talented" is the letters ED, and that they stand for the "extra dimension" a player can bring.

"He goes every rep full speed, as hard as he can. He graded out higher in the [first] scrimmage than all the other backs, and he's been here the least. That just shows you how he pays attention to detail."

Smith will plug in next season. For now, perfecting the details, hitting the right tracks, hanging on to the ball and delivering in pass protection are critical for the current backs.

"Our ball security wasn't bad last year, but there were still a lot of instances where the ball was loose," Traylor said. "We just got lucky and didn't fumble it. We're trying to clean that up.

Like many other programs, the Razorbacks are trying to split up carries among a handful of backs to keep the wear and tear low, and keep legs fresher through the course of the game. Arkansas backs were strong in pass protection and ball security last year, and they need to keep that up while becoming more explosive and following the blocking schemes more accurately. All three of the top backs can be productive in the passing game as well, giving the Hogs an extra dimension at the spot. Boyd is likely to take the bulk of the game reps, but Whaley has had big moments and can be a thumper between the tackles. Hayden can flash in the open field with his vision, agility and speed. Hammonds and Spivey are vying for the fourth spot on the travel roster, a position which must help in the kicking game.