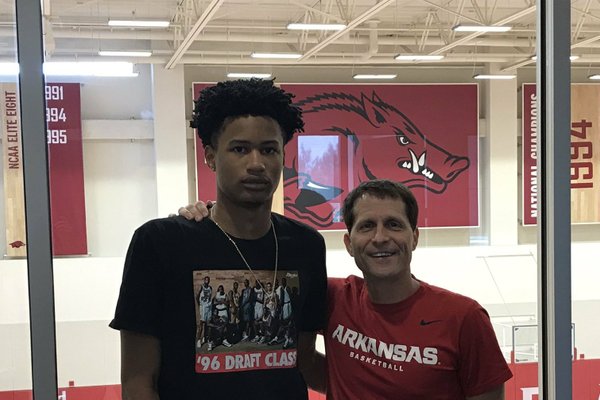 One of the top juniors in the nation, shooting guard Trey Alexander, made his first visit to Arkansas on Tuesday, and he plans to make a return trip.

“It was great. It was such a beautiful campus and I loved everyone on the coaching staff,” Alexander said.

Alexander, 6-5, 185 pounds, of Oklahoma City Heritage Hall, has scholarship offers from Arkansas, Oklahoma, Oklahoma State, Texas A&M, SMU and others. He received his offer from the Razorbacks nine days after the hiring of coach Eric Musselman on April 7.

He said the highlight of the trip was a photo and video session with Musselman. Alexander had a previous relationship with associate head coach Chris Crutchfield at Oklahoma.

“It was great to catch up with him,” Alexander said. “Missed him very much. Very down-to-earth coaching staff.”

Alexander averaged 25 points, nine rebounds, three assists and two steals as a sophomore for the Class 4A state runner-up Chargers after leading them to the Class 4A state championship as a freshman. ESPN rates Alexander a 4-star prospect, the No. 8 shooting guard and No. 51 overall prospect in the nation in the 2021 class.

He’s one of three members of the 16-under Team Griffin the Razorbacks have offered. Guard Jaxson Robinson, who visited the Fayetteville earlier this month, and center Daimion Collins also have offers.

Alexander’s father also had a good experience during the visit.

“My dad loved it as much as I did,” Alexander said. “He said he loved the visit as a whole - everything about it.”