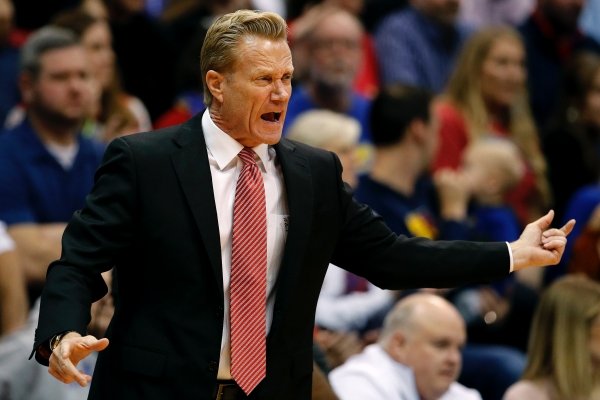 South Dakota head coach Todd Lee talks to his players during the first half of an NCAA college basketball game against Kansas Tuesday, Dec. 18, 2018, in Lawrence, Kan. (AP Photo/Charlie Riedel)

FAYETTEVILLE — Arkansas will host South Dakota and Austin Peay in the upcoming basketball season, according to schedules released by the schools on Wednesday.

The Razorbacks and South Dakota are scheduled to meet Friday, Nov. 22, and Arkansas is scheduled to host Austin Peay on Tuesday, Dec. 3. Both are games scheduled to be played at Bud Walton Arena in Fayetteville.

In its only previous meeting against South Dakota, Arkansas won 33-27 during the 1932-33 season. The game against the Coyotes, as well as games against Texas Southern and Montana, are part of the College Hoops Roadshow, a traveling on-campus event that will also feature Northern Kentucky and Coppin State, according to the Twitter account @TheD1Docket.

"I normally don't like to play friends," Lee said in the school’s release. "However, this game was scheduled before Eric got the job. But it will be an opportunity to play an SEC school and play against one of the best coaches in the country."

A member of the Summit League, South Dakota finished the 2018-19 season with a 13-17 overall record and 7-9 mark in conference play in Lee's first season at his alma mater.

The Coyotes return their top three leading scorers in Stanley Umude (14.4 points per game), Triston Simpson (14.0) and Tyler Peterson (11.4). Umude was a first team All-Summit League selection as a sophomore.

Austin Peay finished last season 22-11 overall and 13-5 in Ohio Valley Conference games. Matt Figger, entering his third season as coach of the Governors, was hired as Arkansas' director of basketball operations in April 2007, but left two months later to accept a full-time coaching role under Frank Martin at Kansas State.

Arkansas has yet to release its schedule for the coming season, but 10 dates have been learned through schedule releases by the Razorbacks' opponents. Arkansas also is under contract to play at Indiana at a date yet to be announced.