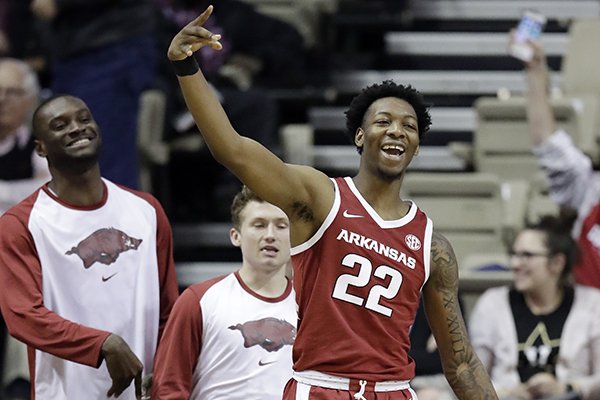 Arkansas forward Gabe Osabuohien celebrates after a score against Vanderbilt during the second half of an NCAA college basketball game Wednesday, March 6, 2019, in Nashville, Tenn. Arkansas won 84-48. (AP Photo/Mark Humphrey)

West Virginia coach Bob Huggins announced the transfer of Osabuohien (Oh-sah-BOY-en) on Wednesday. He will have two years of eligibility remaining.

The 6-foot-8 Osabuohien played in 54 games with eight starts in two seasons with Arkansas. He averaged 2.4 points and 2.5 rebounds per game over his career.

Huggins says Osabuohien "can come in and can make an immediate impact to our team defensively."