State of the Hogs: Phoning a friend 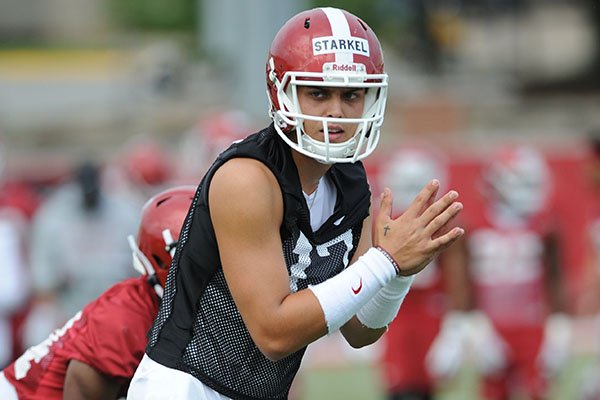 Arkansas quarterback Nick Starkel waits for the snap Friday, Aug. 2, 2019, during practice at the university practice field in Fayetteville.

Don’t ever forget that a sports writer (or sportscaster) is not a coach. They don’t see things like a coach. It’s not even close.

I have a different comparison for the same thing. A really good outdoor writer who was teaching me what he knew about fly fishing said he was not a guide or an outfitter. And, no matter what I had learned, neither was I.

“When you go into a fly shop no matter if it’s around here or out west, tell them straight up that you are a novice and need help,” he said. “Tell them you fish some, but you are a rank amateur. They will help you.

“But, if you go in there and start trying to prove how much you know, they immediately understand how little you actually know. They have knowledge from being on the water almost every day for decades that you will never approach.

“Don’t BS them. They know it immediately and you’ll get no real help. They think, ‘Do it yourself, Know it all.’ Your best bet is to say you know very little because they already know that from the first few sentences out of your mouth.”

It’s the same deal. I can watch a practice and not know much. Oh, I can figure out who is out there and who is not, or who is on the first or second team for that instant I’m allowed to watch, but I really don’t gain much else by watching.

There are some who think they do. And, I guess a little knowledge is better than none.

But I have never depended on my eyes to know what happened in practice. I learned that from my mentors, Orville Henry and Bill Connors. Find someone at practice that knows what they are seeing and listen. I mean really listen. Don’t try to tell them what you see, because they don’t care.

By listening, I’ve learned a little about the game. I know the terms, but sometimes it takes a few minutes for me to recognize what matches the terms. I have been told about “the bear look” that Portland State operates from on defense. Arkansas coach Chad Morris mentioned it this week.

But I had to have a friend draw it up on a legal pad and text me the diagram to remember the exact nature of what it provides. The three inside offensive linemen are covered by three defensive linemen. That defense shifts easily into an eight-man front to slow the running game.

The 1985 Chicago Bears, perhaps one of the greatest of all time, made that defensive front famous. Guess what: it was the players, not so much the scheme. Go back and check the names of those players, many whom are now in the Pro Football Hall of Fame, including former Razorback Dan Hampton.

Yes, it goes back to the players, not so much the schemes. But, I’m getting off track.

This is about the 2019 Arkansas football team, trying to rebound from a 2-10 debacle that ranks as possibly the school’s worst season.

Is this team better? I could have seen the last three weeks of practice and not really been able to tell you with just my own eyes.

But that’s not how I operate. I find the best eyes that I trust who have seen practice and listen. It’s always revealing.

These are former head coaches or all-star players who have been invited to practice by Morris or members of his staff. Former coaches line the sidelines at all practices since these coaches arrived at Arkansas almost two years ago.

Yes, they are closed to the media, but they are open to coaches that have any kind of connection to the program or these coaches.

These are the same sort of men that my dad questioned, legends like Wilson Matthews or Harold Horton. If you watched an Arkansas practice with my father, or an Oklahoma practice with Connors, old coaches surrounded them with a keen eye for what was happening.

I was in those settings and knew one thing: listen. Keep your mouth shut or you would be identified quickly as a “know nothing” sports writer. And, it was what I continue to be when it comes to breaking down a practice.

But you don’t have to stay in the dark. Like that old show that might net you $1 million, you can phone a friend. That’s what I’ve done this week.

I’ve seen a few of the open periods this August, but not even enough to be dangerous in forming an opinion. My friends have seen scrimmages and entire practices.

They are brilliant football minds and trusted. I’ve known some for 45 years, or maybe more in one or two cases. They’ll be honest, or they have so far. I guess that’s what trust is all about. Several in the handful phoned were head coaches. Several played in the NFL.

If you are this far, you are antsy. What about this team? The tough part of August camp is over. It’s time for polish. My friends saw the grind of the last three weeks.

“They are clearly much improved,” a former head coach said. “I watched them at this time last year and wasn’t sure they would win a game. I walked away from one practice and tried to be nice to (the Arkansas coaches). I thought, ‘Man, that’s not an SEC team.’

“I watched this year and it was just the opposite. I thought, ‘Man, they got a real team.’ Overall speed is better. They have a true quarterback competition with a lot of good choices. Now I don’t know how you pick one, but they are all talented.”

This is from someone else, someone I really trust to evaluate quarterbacks.

“I’ll just say they are much better at quarterback,” he said. “I like the two transfers, Nick Starkel and Ben Hicks. I really like John Stephen Jones, too. He’s really a good quarterback and knows how to play the game. He can make plays and move the team. I saw that.

“Then, there’s the freshman, K. J. Jefferson. This is probably not fair, because he’s still got to develop his technique to be more accurate in the passing game, but he has the size, speed and ability of a Cam Newton.

“Now, he’s not Cam Newton yet. It’s not even fair to say anything like that. But he’s got real ability. I can’t help but think he’s got some Cam in him.”

This year’s practice left a good taste when last year was nothing but bad.

“They have more speed in the secondary, just better team speed everywhere,” he said. “I like the young receivers. They’ve got some tight ends and I don’t think I saw the best one.”

That would be Cheyenne O’Grady, out after a minor knee surgery. He should return any day.

It wasn’t all good, according to several phoned.

“I saw question marks,” a former head coach said. “The defensive line may be better, but it’s still not what they have at Alabama, and maybe LSU and some others in the SEC. I just haven’t seen them all.

“But let’s be honest, the reason Alabama is where they are at the top every year, it’s the defensive tackles and defensive ends. I saw a little more speed in this defensive line among some of the young ones, but they aren’t Alabama in ability.

“But hardly anyone is. I just wonder how they compare to the next level in the SEC and I’m not sure.”

Others gave me almost identical remarks.

“They need more dudes,” one said. “They need more speed in the offensive backfield. Who is going to break away when you get that crease? I think Rakeem Boyd has that, but I’m not sure all of the others do.”

There was at least one thought about potential for winning more games than I’ve thought possible. I’m not going to make a season prediction until next week, but one former coach gave me his.

“Ole Miss is a big one early,” he said. “I do think six (wins) is within reach, but that trip is big. They need to get some of these injured studs back pretty quickly.”

That’s in reference to potential offensive line starters Colton Jackson and Austin Capps. Jackson has a foot issue. Capps underwent minor knee surgery. Both are expected to play in the opener.

This team is still lacking depth and can’t afford many more injuries or it will affect the ability to get to six wins and go bowling. Wide receiver Trey Knox is still out with an undisclosed illness.

What’s a decent season? A coach tried to caution about expecting too much.

“There are no bad bowls,” he said. “This team gets to six or seven, they’ve done something and these coaches are going to really give you something in recruiting. They all can recruit and that’s the name of the game. They are better coaches now because they have more speed.

“They’ve been recruiting on a 2-10 season. Win a few more games and that will help them do even better on signing day.”

Another coach didn’t make any predictions, but he just spoke to a common sense realization on the quarterback-receiver mesh.

“I don’t see as many footballs on the ground when they are working on the passing game,” he said. “They throw and catch better than last year. They are just more talented at quarterback and receiver. I think their backs catch it better, too.

“You throw it and catch it decent, people back off you a little. That offensive line will benefit from that.”

The last thought from "a coaching friend" is that the Hogs looked more equipped physically to play in the SEC. He noticed more properly toned lineman and that means they had bulk and weight in the right spots to play their positions. He noted that it takes time to put proper bulk on young linemen. You do it too quickly, it isn't muscle and hurts more than helps.

The old coach said that was what he saw on both sides of the ball, weight that should help. He said, "This team just looks the part now. They didn't last year. I suspect that is just two years in Tru Carroll's weight program. They'll look even better in the next two years as better frames continue to arrive through recruiting and Tru gets to work his stuff on them."

I talked to an old defensive lineman and another with experience in the NFL about what they saw when former players came to a scrimmage last week.

“A couple of the other guys I was with said the same thing,” he said. “They seem to be better in the offensive line. Not as many guys are running through (to the quarterback) like we saw last year. They probably watched it more closely than I was able to and I trust their eyes a lot.”

Yes, that’s the key: Do you trust what you see or hear? I know not to worry about what I see. Find the best eyes and listen.

It’s kind of funny, but two of the conversations morphed into talk about fly fishing. I was asked, “Are they are biting.”

This is one time that I can pretend to be an authority on catching trout. I was comfortable that I had more knowledge than these coaches or players. They were doing the listening.

That doesn’t happen often when I’m around coaches. Listen and you will learn, talk and you will be found out.