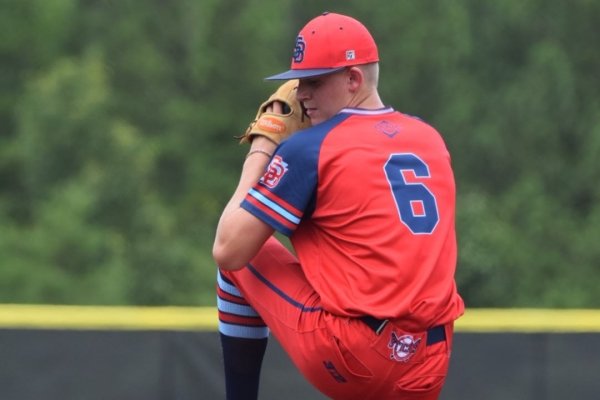 Kyler Spencer, a 6-foot-5 right-handed pitcher from Conway, was the first to announce his pledge to coach Dave Van Horn and the Razorbacks on Sunday shortly after being offered. He is Arkansas' first commitment in the 2023 class.

Chase Brewster, coach of the Arkansas Sticks, says the 15-year-old Spencer "looks like a grown man."

"If it would have played out long enough he would have been able to play anywhere in the country for baseball or basketball," Brewster added. "Arkansas had kind of been his dream school, and baseball was kind of his favorite sport. It was kind of a no-brainer for both sides.

"He committed the same day they offered."

Just beginning his freshman year at Conway High School, Spencer features a fastball that will touch 86 mph as well as a curveball and changeup when needed.

"He challenges hitters, he’s dominant and he’s not afraid to be aggressive in the zone and kind of make you put it in play," Brewster said. "That’s kind of his specialty. ... He’ll be dominant this summer, I have no doubt."

Austin Jobe, on Wednesday, became the fourth member of Arkansas' 2022 recruiting class. A right-handed pitcher from El Dorado, Jobe committed to the Razorbacks staff on the spot.

"He was the No. 2, I believe, at El Dorado this year and had a good spring," Brewster said. "He was kind of unknown being a south Arkansas kid. He was up to 87 mph late in the summer and was just really good. He went up to the Razorback camp last weekend and touched 87."

According to Brewster, Jobe has a chance to turn into a weekend starter for the Razorbacks.

"He’s the kind of kid who will give you 100 pitches every time out," he said. "He’s got a three-pitch mix. At 15, it’s hard to find a lot better velocity or repertoire than he had. If he keeps working, and the projection is what it is, then it’ll be really fun to watch on the weekends."

Jobe, whose older brother, Derek, signed in January to play baseball at Harding, was the lone pitcher-only player on Brewsters' club this summer and made himself readily available for any role. He was considered one of the team's co-aces.

"I don’t think he lost a game all summer," the coach said. "He was really good whenever we needed him. He was on a pitching staff that played in a lot of big events - a lot of Perfect Game events, (Prep Baseball Report) events - and kind of every time he went out he gave you a chance to win. We were proud of him for that.

"He was extremely excited," Brewster continued. "Arkansas was his dream school. Parents were super excited, so we’re happy for him that he gets to go to the school of his dreams."