Sophomore Silver does job in a snap 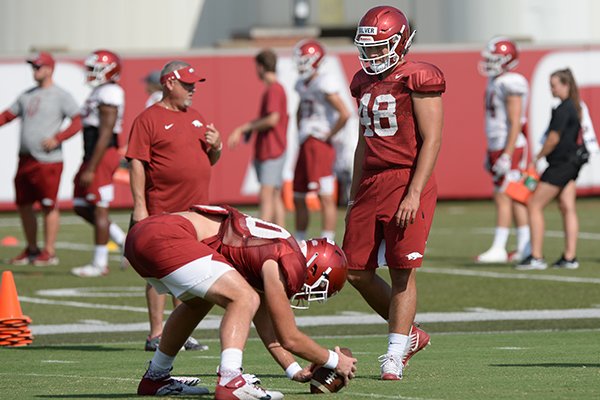 FAYETTEVILLE -- University of Arkansas sophomore Jordan Silver received preseason recognition from Phil Steele's 2019 College Football Preview magazine, but many Razorbacks fans might not have heard of him.

That's because Silver is a deep snapper.

Jordan Silver at a glance

NOTEWORTHY Entering second season as Razorbacks’ No. 1 deep snapper on punts and placekicks … Had 112 snaps last season on 42 extra-point and field attempts and 70 punts and had a 77.2 score by Pro Football Focus … Played defensive end and tight end at Branson High School as well as being snapper … Parents are Lynnie and John Silver.

"Out of sight, out of mind -- that's the sign of a good snapper," said Brett Goode, the Razorbacks' snapper from 2003-06 who played with the Green Bay Packers for 10 seasons. "It really is a lifestyle of being unknown.

"I always say you live your life looking upside down. Which you do, because your head is between your legs."

Silver was selected by Steele as an All-SEC snapper, albeit the fourth team.

"Realistically, being considered among the top four in the SEC puts you top 10 or 15 in the country," Goode said.

Silver made 112 snaps last season -- 42 on field-goal and extra-point attempts and 70 on punts -- and had a special teams grade of 77.2 from Pro Football Focus.

After redshirting in 2017, Silver took over snapping duties with the graduation of Robert Decker.

"Jordan did a good job for us," said Barry Lunney Jr., the Razorbacks' special teams coordinator and tight ends coach. "He was very consistent. He's really improved over the offseason too. His snap times are better. He's gotten stronger. He's gotten more confident. He's had a really good camp.

"To be honest with you, we want this to be the last time that we talk about him this year. As long as we're not talking about him, things are going good."

Goode, a businessman in his hometown of Fort Smith, spent a day this summer working with Silver. They watched videos of Goode snapping, then Goode analyzed video of Silver's snaps and offered some tips. They've stayed in touch with texts and phone calls.

"It's a beautiful connection to have that, for me to be able to talk to someone who has a world of knowledge about snapping like Brett does," Silver said. "I'm blessed with that for sure.

"He's been a great mentor for me and really helped take my game to the next level. He can tell me all the secrets every snapper wishes he knew."

"Jordan's already a good snapper, so we're not reinventing the wheel here," Goode said. "I was able to give him a few pointers here and there. He's taken that all and been running with it.

"Jordan's a great guy. He really wants to learn. He puts in all kinds of work."

Silver began practicing with weighted balls after Goode's suggestion. He uses balls that weigh 20 and 12 pounds compared to a game ball that weighs about 1 pound.

"When you use those weighted balls and then cut back to using a regular ball, you feel like you're not throwing anything," Silver said. "You can just laser your snaps."

"You wear a mullet, you better have a really good deep snap," Morris told the crowd. "But Jordan's got his mullet working really good, so you know he can snap a football really well. Otherwise we're going to cut the mullet."

Silver laughed when Morris' comments were brought up.

"To be honest I didn't think he was even going to name me, because usually when you're named as a snapper, it's not for good reasons," he said. "So when he talked about my mullet, it brought a smile to my face.

"Specialists go under the radar a lot, but Coach Morris talks about family all the time, so he really pays attention to all of us."

Silver began growing a mullet -- a hairstyle featuring short hair on the top and sides but extra long in the back -- a few months ago.

"I don't even know why," he said. "Some mullet magic or something."

"I mean, whatever makes him snap the ball perfect and fast," placekicker Connor Limpert said. 'He's loving it and it's working out for him."

Tight end Grayson Gunter said he doesn't think he can grow a mullet, but Silver makes it look good.

"If you can grow a mullet like Jordan, I say go for it," Gunter said. "Let it ride."

Strength and conditioning coach Trumain Carroll played defensive end at Oklahoma State for Coach Mike Gundy, who might have the most famous mullet in college sports.

Billy Ray Cyrus, a singer and actor, is known for his mullet.

"I think it's great Jordan is growing his hair out," Goode said. "It gives him an identity and confidence. Be yourself, that's what I told him."

Silver, who is from Branson, could have matched mullets with Gundy as a snapper for the Cowboys. He came to Arkansas as a preferred walk-on after also having offers from Oklahoma State, Oklahoma and Baylor.

"Arkansas just seemed like the best place for me because it's an hour-and-a-half drive from Branson," Silver said. "My family is really big about staying together. The opportunity to come in and play was also very enticing to me."

Silver was asked about his expectations for this season.

"I'm just looking to not be noticed unless we run some fake where I catch a touchdown pass," he said with a laugh. "But I doubt that's in the plans.

"I'm shooting for the first-team All-American spot. Blake Ferguson from LSU is the No. 1 guy right now. Taking over the reins from him is the goal for me, and I know if I do my best I can make it happen."