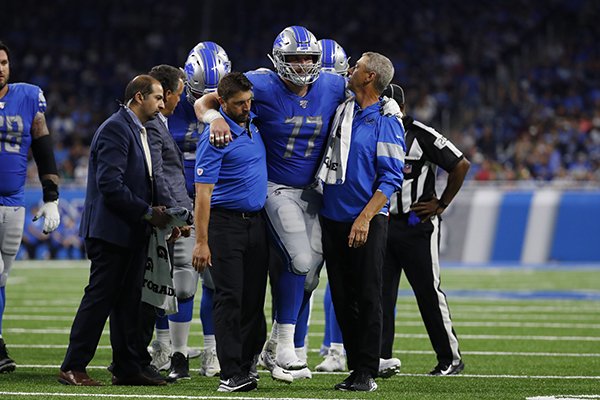 Detroit Lions offensive guard Frank Ragnow (77) is helped off the field by medical staff in the first half of an NFL preseason football game against the Buffalo Bills in Detroit, Friday, Aug. 23, 2019. (AP Photo/Rick Osentoski)

Patricia did not elaborate much more on the severity of the injuries to two of Detroit’s starters. Ragnow injured his right ankle and Davis went down with a right leg injury during the Lions’ 24-20 loss to Buffalo on Friday night.

Speaking on a conference call, Patricia said he didn’t think injured reserve was necessary for either player, but he did not put a timetable on their returns. Patricia said Ragnow and Davis will not play in Detroit’s preseason finale at Cleveland on Thursday night.

“They’ll be healing day by day and we’re still evaluating where they’ll be at,” Patricia said. “The one great thing about these two guys is that they have tremendous work ethic and we know they’re going to be working as hard as they can to get back as soon as possible.”

Ragnow was a first-round draft pick in 2018 and started 16 games last season. He was injured during a running play on second-and-8 from Buffalo’s 8-yard line. He appeared to get rolled on by a Bills player.

Ragnow was helped off the field by medical staff after laying on the turf for a few minutes.