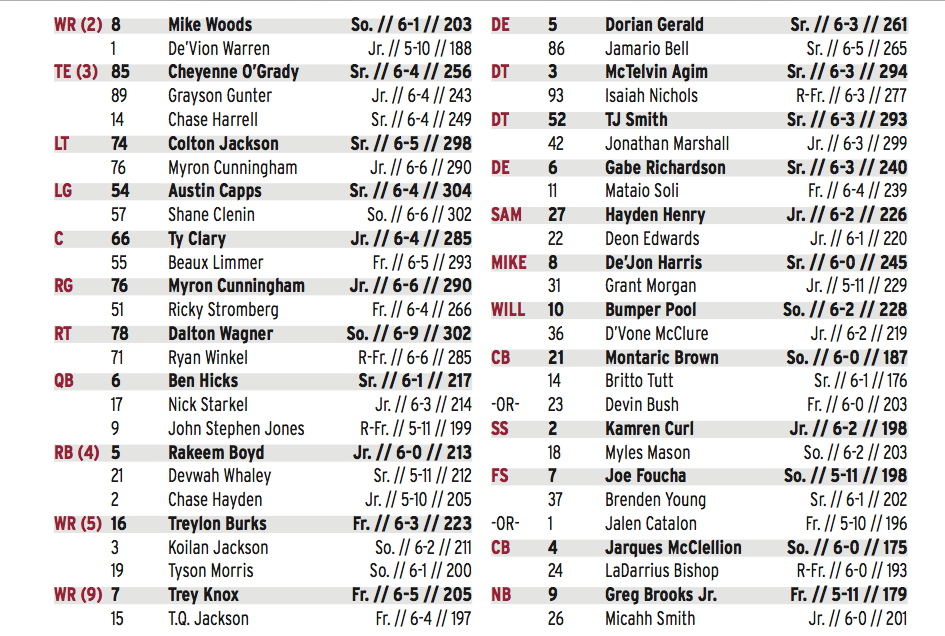 Arkansas' depth chart on offense and defense ahead of Portland State.

Starters are listed in bold

Quarterback: Arkansas coach Chad Morris named Ben Hicks the Razorbacks' starting quarterback for Week 1 on Monday. He and offensive coordinator Joe Craddock cited Hicks' knowledge within the system and experience as factors in the decision. You can read more about that here.

Running back: No surprises here. Rakeem Boyd is the clear No. 1 back. He led the Razorbacks in rushing last season despite not having a full grasp of the offense after arriving late in the summer from junior college. Devwah Whaley and Chase Hayden fill in behind Boyd. Both players are solid complementary backs. Freshman A'Montae Spivey is not listed in the three-deep, but Morris and Craddock have both said Spivey will play. He is a likely redshirt candidate.

Receiver: Alongside sophomore Mike Woods, who is expected to be the leader of the group, is a pair of freshmen in Trey Knox and Treylon Burks. Knox was a standout in spring practices and showed more flashes in fall camp, but his status for Week 1 is still somewhat unknown. He missed the entire final week of preseason practices with an illness, according to coaches. They hope to have him back by Wednesday's workout. De'Vion Warren, Koilan Jackson, Tyson Morris, who was recently placed on scholarship, and T.Q. Jackson are also expected to see the field against Portland State. Coaches have raved about T.Q. Jackson's speed this preseason. Koilan Jackson battled a knee injury in camp, but should be full go for Saturday. He practiced at full speed on Sunday, Morris said.

Tight end: Senior Cheyenne O'Grady is listed as the starter for this week. However, coaches are hopeful he will return by Wednesday. Tight ends coach Barry Lunney loves what Grayson Gunter has done this preseason. If O'Grady is not able to play Saturday, Gunter would likely be the top tight end. Chase Harrell has had a transformational offseason, moving from receiver to tight end. He added nearly 30 pounds and has rededicated himself to the game, he said on media day. True freshman Hudson Henry is not listed. He ran with the scout team on Saturday doing the Beanie Bowl.

Offensive line: Morris and Craddock both said Monday they believe the first-team line (L–>R) of Colton Jackson, Austin Capps, Ty Clary, Myron Cunningham and Dalton Wagner gives Arkansas its best chance in Week 1. Jackson will play and "should start" against Portland State, Morris added. Cunningham is also listed as the unit's second-team left tackle. A pair of true freshmen are in the two-deep as well - Beaux Limmer at center, Ricky Stromberg at right guard. "I love him. He’s a really good player for us. You know, if you didn’t know any better, him wearing the number he’s wearing it’s almost like having Hjalte (Froholdt) back out there, you know. Just a little lighter Hjalte. Not quite as big. He works his butt off," Craddock said of Stromberg on Monday.

Defensive line: Much like the running backs group, this unit has seemingly been set for quite some time. Dorian Gerald and Gabe Richardson hold down the end spots with TJ Smith and McTelvin Agim at tackle. Former Springdale High standout Isaiah Nichols looks to be in line to play behind Agim, and Jamario Bell and true freshman Mataio Soli are slotted at second-team ends.

Linebackers: De'Jon Harris, Bumper Pool and Hayden Henry headline this group. No surprises with these three. Defensive coordinator John Chavis likes this bunch a lot. He also likes the potential of the guys behind the projected starters. Chavis, typically not a coach to sing the praises of any one player, said following the first scrimmage of the fall that Grant Morgan put in a lot of good work throughout spring ball and preseason practices. He says there is no dropoff when he enters for Harris. D'Vone McClure moved from nickel back to linebacker this summer to provide more depth, and Chavis likes the athleticism he brings to the position.

Secondary: Arkansas is very young in the back end of its defense. Jarques McClellion and Montaric Brown are both sophomores, and safety Kam Curl is the veteran as a junior. Joe Foucha is expecting to have a breakout season at free safety. He says the game has slowed down for him, and he is playing with much more confidence. True freshman Devin Bush, who enrolled early, is listed as an option at second-team corner with Britto Tutt. I expect him to get plenty of opportunity to prove himself this season. Same thing with freshman safety Jalen Catalon.

Kicker: It is Connor Limpert's job to lose. He has put together solid seasons in back-to-back years, and it would be a stunning development if he loses starter status.

Punter: Chad Morris said Monday that both Sam Loy, a transfer who began his career at Vanderbilt before spending one season at Colorado, and Reid Bauer will both punt in the season opener. Loy has impressed in preseason practices.

Kickoff return: De'Vion Warren has been a spark on kickoff return both seasons with the Razorbacks. Adding Rakeem Boyd to the mix as well is interesting. He has top-end speed in the open field and could provide some pop.

Punt return: Treylon Burks will return punts in the season opener, Morris said Monday. Burks has very sure hands, and that's what you need at this position. Montaric Brown and Jalen Catalon also worked punt return in preseason practices.