State of the Hogs: Is passing game fixed? 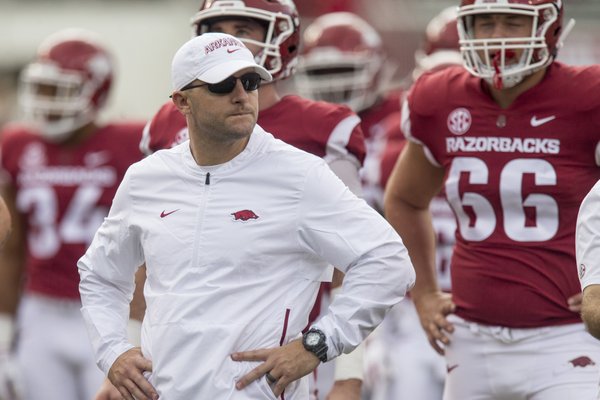 Joe Craddock, Arkansas offensive coordinator, during warmups before the game vs Alabama Saturday, Oct. 6, 2018, at Razorback Stadium in Fayetteville.

FAYETTEVILLE — The Arkansas passing game last year was anemic. That’s my word; pick out the one you like for inadequate or out of sync/rhythm.

In the 2018 season review, Arkansas coach Chad Morris told the media that one of the problems was not enough separation between receiver against man-to-man coverage from the corners and safeties.

I bought that because it matched some of the things I saw last year, although I did see some open receivers that were missed by the quarterbacks now sitting the bench after leaving via the new NCAA transfer portal. Receivers bailed, too.

Back to the end-of-year message from Morris, it’s worth pulling those quotes because I asked follow-up questions on Monday as Morris previewed the season opener against Portland State on Saturday at 3 p.m.

Here is what Morris said about the problems that plagued the Arkansas passing game in 2018:

“The bigger-body-style receivers, that’s an area that we’ve addressed. We’ve got to continue to recruit that style of wide receiver, and not only just wide receiver but at all positions. Overall, I did not think we were near fast enough (at wide receiver) to separate like I wanted to separate.”

They check the box as bigger. All have some speed, although Morris said recruiting in the future would feature more speed at wide receiver.

“We definitely addressed our needs there,” Morris said. “But it’s not a final product. We have to continue to grow (the wide receiver position).”

“We wanted to watch the Chiefs in their OTAs to see if we could pick up on one or two things that would help us (in the passing game),” Craddock said, referencing June practices that are called “organized team activities.”

It’s the closest NFL operation to Fayetteville, just a little over three hours from campus. It’s also a team that uses some concepts that are similar to the Arkansas offense, a one-back spread with run-pass options. Kansas City quarterback Patrick Mahomes is a master of the RPO.

“They have one of the best offenses in the (NFL),” Craddock said. “Their coach, Andy Reid, has adapted to the college style. Justin has a connection there, so we went there to watch a practice. It was in the time between two of our camps.”

Among the things that Craddock said was learned was a way to throw more in practice to the running backs and tight ends.

Those practice concepts have helped improve the ability to complete more passes in practice. I’ve noticed that in the limited access for the media in August practices.

“Just against air, we are better,” Craddock said.

That doesn’t always translate to full contact situations, but I’m guessing the Hogs improve to closer to 65 completion percentage. They were at 54.6 percent last year. That does qualify as anemic.

It’s not easy to incorporate so many freshmen and newcomers into a passing game and have it rock along at the outset of the season. But that’s one of the reasons the coaches picked Ben Hicks as the starting quarterback over strong-armed Nick Starkel.

Hicks spent three seasons in the Morris-Craddock offense at SMU. His ability to get the freshmen lined up in the correct spots was one of the reasons he won the job for at least the first game.

“We are teaching freshmen techniques,” Craddock said. “We’ve come a long way, but we still have a ways to go.”

Earlier, Craddock said, “Freshmen receivers can sometimes be split too wide. Ben can get them in the right spots and he can also make protection changes (for the backs and linemen).”

All of that just makes the passing game slide along better. When you look back at last year and Ty Storey was at 57.2 percent and Cole Kelley was at 52.2 percent, there might be some answers in alignment and protection that might be helpful.

Morris said one of the things that a more experienced quarterback does is in relation to the speed of the game. For years I’ve heard quarterbacks heading into their senior year talk about “the game slowing down.” Morris had a translation.

“We are talking about knowledge,” Morris said. “With knowledge, the game slows down. That’s hard to explain to the average fan. What it means is anticipation and that helps get the ball out on time.”

Accuracy helps, too, but it’s the knowledge that helps accuracy.

The Hogs should be more accurate this season. How much the passing game improves is still open for debate.

I’ll be watching for separation Saturday against Portland State. Can anemic turn into good? Are 350-yard passing games common? Hicks had 12 at SMU. Starkel had two of more than 400 yards at Texas A&M.

Among the returning Arkansas receivers, Jordan Jones is the only one with a 100-yard game. He’s currently out with an injury.

There are two returning players with a streak of consecutive games with a reception, but neither one may play in the opener. Deon Stewart (four) is out for the year after knee surgery. Cheyenne O’Grady (eight) is recovering from minor knee surgery. He may play if he’s returns to practice by Wednesday.

“He’s taking longer to heal than two others with similar surgeries, Austin (Capps) and Koilan (Jackson),” Craddock said. “Coach has a rule, if you can’t practice, you can’t play. We want to get (O’Grady) out there by Wednesday.”

O’Grady does know how to properly align in this offense and is a true weapon. He’s not likely to commit many busts despite missing a couple of weeks of practice.

Knox has also missed time with an undisclosed illness. Morris was hopeful that Knox would be back on Wednesday, too. He’ll play if he practices.

“I don’t worry too much about Trey,” Craddock said. “He came in last January and that has really helped him. He’s been in all of our meetings. It wasn’t like he just showed up this summer. He’s picked up the offense a lot faster (than most freshmen). I have no concerns.”

Well, there are always concerns playing a lot of freshmen, but it should be a better year in the throw-and-catch department. Talent can trump experience, especially if there is a quarterback to get the youngsters in the right spots.