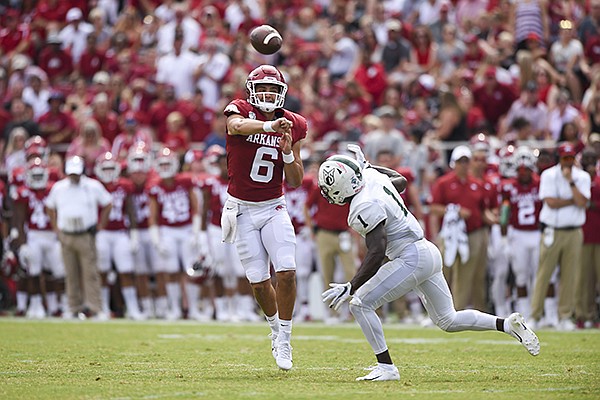 FAYETTEVILLE — Arkansas defeated Portland State 20-13 on Saturday, but it did little to instill confidence that 2019 will be an improvement over 2018.

The Razorbacks struggled at home to put away an FCS team that won four games a year ago. In fact, Portland State's two games against FBS teams last season resulted in losses by 53 and 48 points.

A relatively poor offensive performance by Arkansas was offset by a strong game by the Razorbacks' defense, which recorded three interceptions, six sacks and had allowed only two field goals until the Vikings scored on a busted play with just more than four minutes remaining to pull within one score.

Arkansas sealed the win when Joe Foucha intercepted a pass with 11 seconds remaining. The Razorbacks had backed Portland State up after a Sam Loy punt was downed by De'Vion Warren at the Vikings' 3.

Saturday's game seemed to do little to answer how improved the Razorbacks are at the quarterback position. Ben Hicks started and finished the game, and completed 14 of 29 passes for 143 yards. Hicks was pulled temporarily for Nick Starkel late in the second quarter, but Starkel threw an interception and had the first half clock run out after taking Arkansas into the red zone twice.

Hicks' performance included a number of missed throws and some dropped passes, but to his credit he led four scoring drives that totaled 54, 64, 67 and 63 yards. Arkansas coach Chad Morris said after the game that Hicks will be the team's starter again next week at Ole Miss.

The Razorbacks' offensive standout Saturday was Rakeem Boyd, who rushed 18 times for 114 yards and scored on a 2-yard touchdown in the third quarter to put Arkansas ahead 17-6.

Connor Limpert's second field goal of the game early in the fourth quarter put the Razorbacks ahead 20-6.

That scored stood until Portland State backup quarterback Jalani Eason led a 14-play, 75-yard drive that ended with a 32-yard touchdown pass to FCS All-America tight end Charlie Taumoepeau on a fourth-and-13 play. Taumoepeau caught a jump ball from Eason and went untouched into the end zone after an Arkansas defensive back misplayed the ball in the air.

It was one of few defensive miscues for the Razorbacks, who allowed 230 yards on 61 plays. Arkansas was especially good against the run, holding the Vikings to 75 yards on 28 carries, aided by the six sacks that resulted in 29 lost yards.

McTelvin Agim and Kamren Curl had two sacks apiece. Curl also had an interception in the second quarter not long after a targeting call against him was overturned on a replay review.

Eason played the fourth quarter after PSU starter Davis Alexander was injured when he was caught from behind and tackled by Agim. Alexander's scrambling ability had given the Razorbacks some problems early in the game, including on a 22-yard run in the first quarter.

Arkansas ultimately avoided an upset in its closest game vs. an FCS opponent since a 28-24 comeback victory over Western Illinois in Bobby Petrino's debut as the Razorbacks' coach in 2008. Arkansas snapped a four-game losing streak that dated to last season.

Can Arkansas snap an 11-game SEC losing streak next week at Ole Miss? The Rebels lost 15-10 at Memphis on Saturday, but might have looked better in a loss than the Razorbacks did in a win.