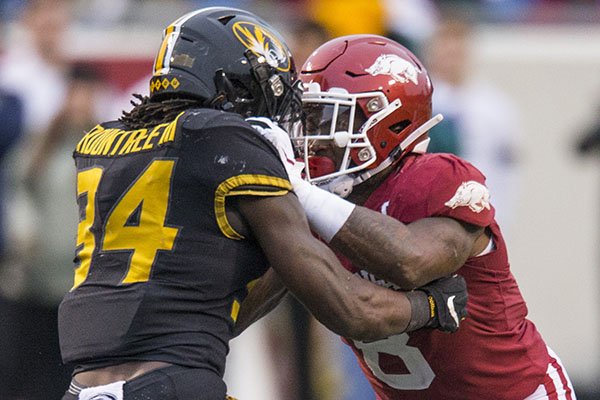 The defensive captain and three-year starter from Harvey, La., spoke about what three consecutive losing seasons -- including an 8-28 record and not a whiff of postseason chances -- felt like.

The brightest light on the offensive side virtually all year, Boyd had 95 rushing yards on 21 carries. The Houston native and junior-college transfer wound up with 1,133 rushing yards.

The senior from Harvey, La., had a game-high 8 solo tackles and 11 total. Harris forced a fumble and had 2 tackles for 7 yards in losses while hitting the 100-tackle mark for the third season in a row.

"It's been frustrating, very frustrating the past three years," Harris said. "But just last night with the seniors giving a talk, I'm thankful just to be a part of it.

"I wouldn't go back and change where I went to school. I learned a lot and gained a lot from the relationships and the people here. I care about everyone around here. It's been frustrating, but I'm thankful for it."

Harris always has spoken about addressing the most important issues with the younger players on the Arkansas roster. One of those dealt with the changes at head coach. Whomever Athletic Director Hunter Yurachek hires will be the third permanent head coach since 2017, following Bret Bielema and Chad Morris.

"I told the younger guys last night that just have faith and just buy in," Harris said. "Just give the coach a chance. I feel like the majority of the guys didn't buy in over these last two years with Coach Morris, and you could see what happened.

"It's not just the coach's fault, like the players play a big part in it, too. I told them grow up. We played as freshmen, we grew up fast, and we understand what they're going through, but that's gonna have to be the thing when a new coach comes in: Everybody has to buy in."

Harris added some advice for whomever Arkansas hires.

"I feel like they just need someone to come in and demand everything from everyone," he said. "Don't slack off of any player. Treat everyone as one. I feel like once you do that and players see that, they'll respect you more and do everything for you."

Arkansas' 19-game conference losing streak is the sixth-longest on the books of the venerable SEC.

Third place on the list will be within reach for the Razorbacks in 2020.

Senior kicker Connor Limpert missed a 54-yard field goal early in the fourth quarter on his only try in Friday's loss to Missouri.

True freshman KJ Jefferson made his first career start in a 56-20 loss at No. 1 LSU, then junior Jack Lindsey got his first nod as a collegian Friday.

Arkansas had a plus-2 turnover margin in its final two games. Kamren Curl forced a fumble and recovered it against LSU, and nickel back Greg Brooks had an interception against Missouri.

Playing a relatively close game against Missouri on Friday helped the Razorbacks dodge what would have been school-record territory for scoring margin.

Arkansas had been outscored 254-80 in its previous five games, putting the Razorbacks in jeopardy of surpassing the school-record margin of minus-16 points per game set in 1918.

Instead, Arkansas finished the season with a scoring differential of 442-257, an average of minus-15.4 points per game that ranks third worst in school history.

Arkansas finished with 340.1 yards and 21.4 points per game. The Razorbacks ranked 109th in the FBS ranks in both categories entering Saturday's games.

Washington State Coach Mike Leach, a potential candidate for the head coaching job at Arkansas, got grumpy after the Cougars' 31-13 loss to Washington on Friday, their seventh consecutive loss in the Apple Cup series.