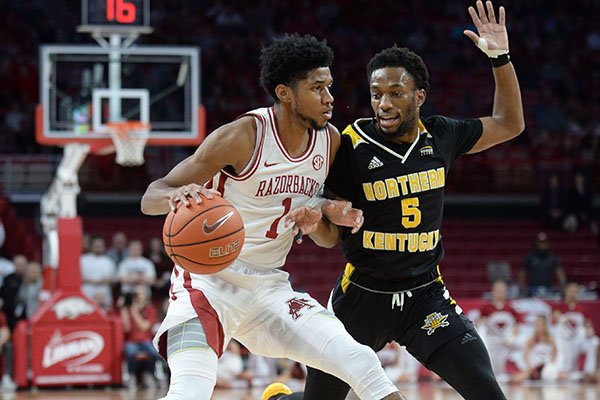 FAYETTEVILLE -- The University of Arkansas men's basketball team found itself in a street fight with Northern Kentucky on Saturday, and Mason Jones wasn't able to throw any punches while Isaiah Joe was swinging but not landing many.

The Razorbacks still found a way to hold off the Norse 66-60 at Walton Arena before an announced crowd of 14,080.

Arkansas (7-0) won its previous five home games by an average of 28.2 points.

"For me personally, I loved it, because not every game is going to be a blowout," said senior guard Jimmy Whitt, who led the Razorbacks with 24 points, 9 rebounds and 2 assists. "You've got to be able to grind out wins. That was good for us. We really needed that."

Jones, a junior guard whose last-second, banked-in three-pointer lifted Arkansas to a 62-61 overtime victory at Georgia Tech on Monday night and who is averaging a team-high 18.5 points, didn't play against Northern Kentucky because of a shoulder injury. Joe, averaging 16.7 points per game, shot 2 of 10 from the field and finished with 10 points.

"We grinded the last win, and we grinded out this win," Whitt said. "It shows that when adversity hits, we can handle it. We can step up and make the necessary plays to get the win."

"We've all got to come out and be prepared," Sills said of playing without Jones. "Everybody's got each other's back."

Sophomore forward Reggie Chaney and junior guard Jalen Harris were big off the Arkansas bench. Chaney had career-highs of 11 rebounds and 5 assists while scoring 6 points. Harris had 5 points, 5 assists and 4 rebounds.

"I thought Jalen's and Reggie's minutes were phenomenal," Arkansas Coach Eric Musselman said. "I thought Desi and Jimmy did a great job of scoring against their zone."

The Razorbacks were clinging to a 62-60 lead when Northern Kentucky junior guard Adham Eleeda missed a wide-open three-point shot with 14 seconds left.

"You couldn't get a better look than that," Norse Coach Darrin Horn said. "It just didn't go in."

Horn said the play was designed for senior guard Tyler Sharpe, who passed the ball to Eleeda.

"Tyler didn't have a shot, but he didn't try to force one and didn't turn it over trying to make a play," Horn said. "He was under control, got in the paint and kicked it out to Adham.

"Adham is as good a shooter as we have in terms of just making shots. He just hasn't been able to carry it into game action yet. I actually told him coming out of the last timeout, 'You're about to make a big shot for us. Your time is coming.' I thought it was going in, but it rimmed in and out."

"We should have stayed steady and stayed on our man," Sills said. "I feel like we should never gamble at all. But it paid off perfectly when we got the rebound and we still came out with the win."

"Obviously, the instructions were, 'Don't leave your feet on a three and guard the three-point line,' " Musselman said. "But with a team that drives and kicks, sometimes guys just naturally react to go help, and Adrio went to help."

Eleeda came into the game 5 of 25 on three-pointers, and 6 of 28 from the field overall.

"That's a player that like 90% of his shots are from three," Musselman said. "He was certainly not anybody we wanted to leave open. Having said that, we came out with a win."

Bailey rebounded Eleeda's miss, was fouled with 11 seconds left and hit two free throws to give the Razorbacks a 64-60 lead.

Northern Kentucky 6-6 senior forward Dantez Walton had a game-high 30 points and added 10 rebounds. He hit 10 of 14 shots -- including 4 of 6 three-pointers -- and 6 of 8 free throws. He also had four steals and two assists.

"I thought we had the best player on the floor in Dantez Walton," Horn said. "Quite honestly, I didn't think it was close. I thought Dantez was outstanding and really impacted the game in a number of ways, not just scoring."

"We knew he was a good player, and when he gets it going, it's hard to stop him," Whitt said. "You have to give credit to them. They got him in really good positions to score. He was feeling it tonight."

Northern Kentucky jumped out to an 8-2 lead, prompting Musselman to call his first timeout of the season.

"It's the first time that we didn't come out from the onset and put our imprint on the game," Musselman said. "I thought that we played too casual to start the game."

The Norse pushed their lead to nine points -- the largest deficit Arkansas has faced this season -- at 13-4 after Walton hit a three-point basket with 15:01 left in the first half, but the Razorbacks rallied.

Arkansas outscored Northern Kentucky 10-0 during the final 3:39 of the first half -- with Whitt scoring six points and Sills four -- to take a 33-28 halftime lead.

The Razorbacks stayed ahead the rest of the game and led by as many as 12 points, but the Norse fought back and could have taken the lead if Eleeda's three-point attempt had gone in.

"It was a bit of miscommunication," Whitt said. "It worked out in our favor, but you don't want to try to win games like that.

"You're basically hoping they miss a shot. You want to have the game more in your hands. It's something we'll get corrected."

KEY STAT The Razorbacks outscored the Norse 38-18 in the lane.

UP NEXT Arkansas plays Austin Peay at 7 p.m. Tuesday at Walton Arena in Fayetteville.