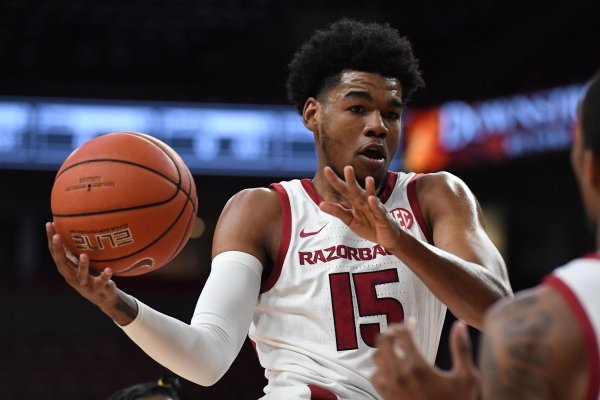 FAYETTEVILLE — Arkansas guard Mason Jones will be a gametime decision against Austin Peay on Tuesday (7p.m. on SEC Network+).

Jones, who missed his first game with the Razorbacks on Saturday, is battling an AC sprain in his shoulder, according to a team spokesperson. He did not take part in pre-game warmups prior to the Northern Kentucky game.

Arkansas coach Eric Musselman and Jones met Monday morning, and the coach noted that Jones will attempt to practice today.

“(He will) probably not do any contact stuff,” Musselman said. “Right now, it’s not bothering him shooting. It’s bothering him defensively a little bit when he puts his arm a certain way. The good thing is if he plays we need his shooting more than we need his defense.”

In six games, Jones is averaging a team-best 18.5 points per game on 50 percent shooting. He is also second on the team in rebounding (5.7) and leads Arkansas in steals with 16.