King: Settling up on preseason wager 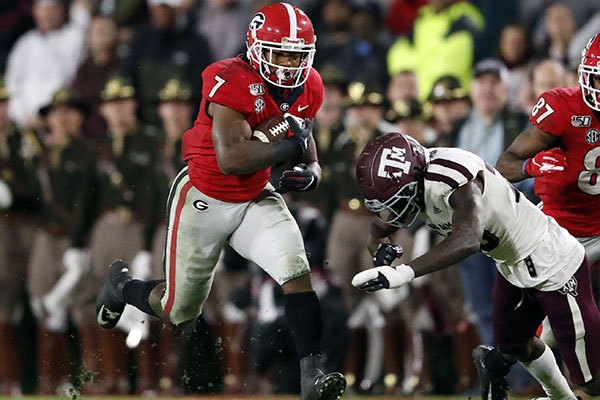 LITTLE ROCK — Nailing an upset winner at the racetrack and losing a photo for second can cause an exacta player to vilify at least one jockey, maybe more.

Blaming somebody else — a rider for misjudging the pace or failing to anticipate traffic problems, for instance — is easier than owning up to misreading past performances.

However, poor handicapping is the only explanation for being wrong about Texas A&M and Georgia, and those erroneous conclusions ruined the bottom line betting Monopoly money on Nevada-generated win totals for SEC teams.

When the Aggies and Bulldogs squared off Nov. 23, an A&M victory would have meant cashing the $30 maximum bet on both teams — an exacta of sorts — and showing a profit for a fourth straight year.

A&M bettering 7.5 victories and Georgia falling short of 10.5 was based on Jimbo Fisher transforming the Aggies into an SEC West contender in his second year and the Eastern Division Bulldogs regressing vs. Notre Dame, A&M and Auburn without seven players drafted by the NFL.

The moment and the mundane underline the failure in judgment.

A win Saturday in the SEC championship and Georgia is in the four-team College Football Playoff, probably as the No. 2 seed. If the Bulldogs squeak by LSU, both are likely to qualify for the CFP. Georgia’s status reflects remarkable resiliency following a double-overtime loss in mid-October to a South Carolina that won only three other games. That day, Jake Fromm threw his only three interceptions of the season, including one returned for a TD, and a Georgia opponent topped 17 points for the only time this season.

A&M was “enthusiastically endorsed” to win eight or more despite playing three of the preseason favorites to make the CFP — Clemson, Alabama and Georgia. Instead, the Aggies were 4-4 in the SEC only because of victories over Arkansas, the Mississippi schools and South Carolina — a combined 8-24 in the league. Does a huge guaranteed contract prevent a coach from being on the hot seat in his third year?

In Athens, the Aggies pretty much gave up running the ball in the second half, couldn’t force a punt in the final four minutes even though the Bulldogs started from their 10, and lost 19-13. A week later vs. LSU, the margin was 43.

When the only two max wagers with the pastel colored bills are losers, the hole is too deep to overcome. The bottom line was a $40 loss.

The fact that Georgia was a half-game better than the line and that A&M was a half-game short is a reminder that the sports book handicappers in Nevada are very, very skilled.

With one game remaining in the season, nine SEC teams were still in doubt vs. the over-under number. Not surprisingly, Arkansas was the first team mathematically eliminated.

Supporting over 5.5 wins, the lukewarm $10 wager was kaput when two-game winner Arkansas lost to Mississippi State by 30 on Nov. 2. By the same token, $20 on Mississippi State under eight and the same amount on South Carolina to exceed 5.5 were settled early — the former a winner, the latter a loser.

Winning $20 wagers on Kentucky to better 6.5 wins and Mississippi State to fall short of eight were as much about confidence in Kentucky coach Mark Stoops and a lack of the same concerning MSU’s quarterback. The mere fact that Stoops reportedly interviewed for the Florida State job is indicative of what he has accomplished in Lexington, and the Bulldogs were supposed to go with a transfer who had thrown 41 passes in three years at Penn State.

More than anything, expecting South Carolina to win six or more was based on the Gamecocks being 12-12 in the SEC under Will Muschamp and going to a bowl three straight years.

Tennessee closed with five straight victories to get to seven and earn a push on $20 wagered on the over.

A wrap-up of the less enthusiastic $10 wagers with the Nevada number and the record:

Appropriately, the final paragraph is one more example of poor handicapping.

Believing the sports books had nailed LSU and Vanderbilt, there was no reason to venture on the Tigers or the Commodores. Assigned a nine, LSU won its 10th on Nov. 16, the same day Vanderbilt was doomed to finish below five victories.