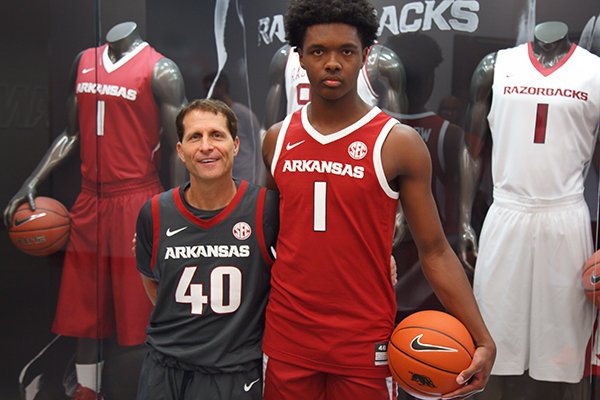 Thanksgiving had an extra meaning for University of Arkansas basketball target Harrison Ingram, his teammates and classmates at St. Mark's School of Texas in Dallas.

An F-3 tornado with winds of up to 140 mile per hour caused extensive damage to the school on Oct. 20. The tornado and about eight others hit northern Texas and caused an estimated $2 billion in damage.

"It was a really scary experience," said Ingram, who was home at the time. "I was upstairs and the power went out. I was on the phone with my best friend and then the call went silent, so I took my dog and went into our bathroom, which is our safe place.

"It sounded like a train coming straight for my house, and then my ears popped and it was mayhem. This experience really made me appreciate life and how quickly everything can change."

The destruction stretched 15 miles, but remarkably there were no fatalities. St. Mark's Coach Greg Guiler believes the timing of the tornado saved lives.

"It was like 9 o'clock at night, and the Cowboys game was on so everybody was at home watching the game," Guiler said. "Honestly that probably saved some lives."

The school looked like a war zone, but missed class time was limited to seven days thanks to the hard work of a local construction company that got the school back in shape.

"Literally, buses were across the street in trees," Guiler said. "The gym looked more like a pavilion. There were a lot of memories in 20 good years in that gym, and to walk through some of the carnage was crazy. It was surreal."

The school and community fought through the shock to help each other.

"I just sensed a resolution where the community -- the players included -- were immediately out the next day getting in each other's neighbor's yards and cleaning up debris," Guiler said.

A player who had been in the basketball program for several years joined a group of students in cleaning up debris.

"I remember him being there at one particular house where we're cleaning up a host of tress that had fallen," Guiler said. "After three or four hours he said, 'Well, I probably better head back home,' and one of the parents asked, 'Is everything OK at your place?' He said, 'No, we don't have an upstairs at our house.' "

The group turned its attention to helping the player and his family.

"What kind of a kid is there helping out a friend when his own house is decimated like that, and then see that entire group of kids go over to his house and spend the afternoon over there helping," Guiler said.

A team captain, Ingram also has shown leadership during the aftermath of the tornado.

"Harrison from the get-go kind of said, 'Hey, we're St Mark's strong,' and that has been a theme for our basketball season," Guiler said. "It's a true statement that he first vocalized in the wake of everything, and we all have kind of latched on to it and there have been T-shirts made across campus."

Ingram, who has a 3.5 grade-point average, also helped in the area around the school.

"Just helping the community out and making sure everyone was OK and all the workers had water," said Ingram, who made an unofficial visit to Arkansas in August.

He led the Lions to the Dallas Mavericks Fall Classic Blue Division title on Nov. 25-27 while being named MVP of the event. He scored 21 points and had 13 rebounds, 7 assists and 2 steals in a 65-50 victory over Prestonwood Christian Academy in the championship game on the 27th, his birthday.

"He just controlled everything," Guiler said. "He just plays with such calm and such poise. There's just no moment that's too big for him. That presence is what made him a great leader in this particular season with all the things we've gone through."