Back on air, Zimmerman still calling the Hogs 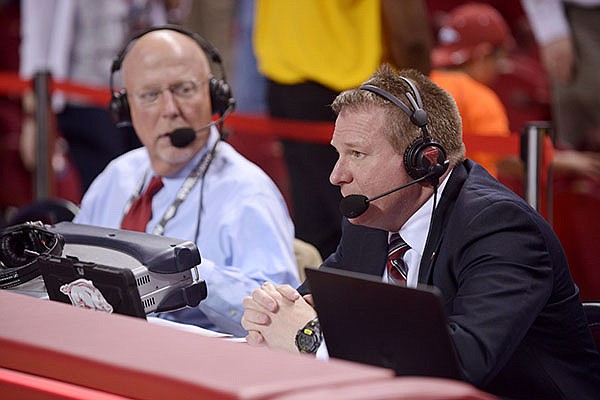 Now in his fourth season as the color analyst for the Razorbacks' radio network, Zimmerman is eight months removed from being let go by the University of Arkansas. The radio crew is employed by Learfield IMG College, separate of the university.

In the previous three seasons, Zimmerman’s radio gig had complemented his full-time job as the director of operations for the UA basketball team. But when Mike Anderson was fired as the Razorbacks’ head coach in March, so was most of his staff, including Zimmerman, who was with Anderson for all eight years in Fayetteville and for 17 years overall.

“I think it could be awkward for some people, and I think it is awkward deep down, but I just block out the awkwardness and don’t let it be.”

Zimmerman grew up in the small town of St. Vincent, near Morrilton. He tried to walk on for the Razorbacks in 1986 but was told by Anderson, then an assistant coach for Nolan Richardson, that he wasn’t good enough to make the team. He stuck around as a team manager, though, and earned a Final Four ring in his senior year of 1990.

Razorbacks were Zimmerman’s childhood heroes. He readily shares stories about his favorite memories of Arkansas basketball, like watching The Triplets defeat UCLA in Albuquerque, N.M., in 1978.

Growing up a diehard fan gives Zimmerman an appreciation for the program’s history and success, and the expectations that Anderson’s staff came short of reaching.

“You have to have that run,” Zimmerman said. “At UAB and Missouri, we had deep runs and we never had that run here. So, I understand it.

“I also take up when people say, ‘Hey, you were terrible.’ Well, no we weren’t. Out of 14 teams, we were third in the league in wins. We just didn’t have the run.”

Arkansas came close a couple of times, but ran into good North Carolina teams in the second round of the tournament in 2015 and 2017. The 2017 Tar Heels overcame a late deficit to beat the Razorbacks en route to winning the national championship.

Zimmerman had chances to get back into coaching this year. He estimates 15 high schools reached out to him about coaching positions and he turned down a chance to be on another college staff at North Carolina-Asheville.

About a week after Anderson was let go, Zimmerman was called by David Shoemaker, general manager of Razorback Sports Properties. Shoemaker oversees the radio game broadcasts and told Zimmerman he would hold his spot.

“I had some chances, but when I weighed all those jobs against moving, to me it was greater to be here,” Zimmerman said. “I had never been through that. I was 50 years old and never not had a job, and those Learfield IMG people, David Shoemaker, they’ve been so good to me that I said, ‘You know what, I don’t have to move. I can stay here and try to make ends meet,’ and it still gives me a chance to be with the Razorbacks.”

Shoemaker said he had no hesitations bringing Zimmerman back to the broadcast.

"One of the parts of the coaching change that could have impacted us was if it caused us to lose Matt," Shoemaker said. "He had coaching opportunities that would have taken him away from Arkansas. I immediately hoped he would stay here and continue to be part of our broadcasts.

"The last few years of him on the broadcast, he brings a lot of energy, knows the game really well. I think our fan base connects with him really well, and I think that would have left a huge void if we would have had to replace him on our broadcast."

Without his previous basketball responsibilities, Zimmerman was able to travel and assist on the RSN football broadcasts this fall. He served as a spotter on the broadcasts after the previous spotter, Todd Mercer, stepped away due to work.

"Anybody that has ever worked in a broadcast booth will let you know you've got six or seven guys crammed into a small area trying to make it happen on game day," Shoemaker said.

"I called (play-by-play announcer) Chuck Barrett...and we thought, 'All right, who's going to do this? Who's going to gel together with our team and not be fumbling around in the booth?' I said that one guy who would obviously know how to work with Chuck and the rest of our team, and wouldn't be on a learning curve is Matt."

In spite of a 2-10 football season, Zimmerman said he enjoyed this year on the football broadcasts, especially the travel. He said he had been to football games at LSU and Alabama previously, but this was his first time to see football game days at Kentucky and Ole Miss.

"I had never done anything like that with football," Zimmerman said. "I just went to the games. I never realized all that went into it.

"Thousands of people would love the chance to do that. I didn't take that for granted." 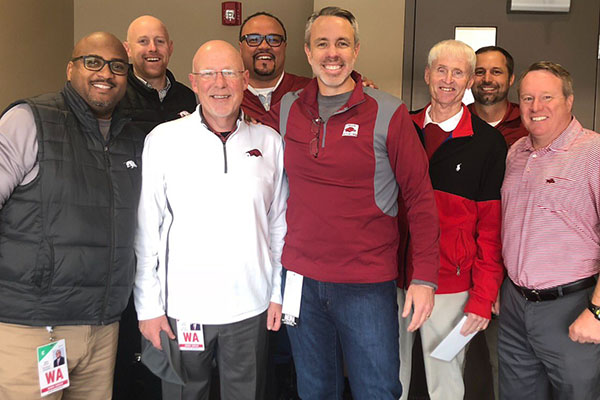 One of Zimmerman’s favorite moments of the past several months came in October when he was on the floor for the dedication of Nolan Richardson Court. Surprising everyone, Anderson walked onto the floor with several past Richardson players and coaches, and was greeted with a loud ovation in his first public appearance in Arkansas since he was fired.

“They didn’t even announce his name. He just walked out and everyone goes nuts. I was kind of looking back and at first thought it was for Coach Richardson. Then I glanced up and saw Coach Anderson on the big screen and the fans were so good.

“They wanted us to win. They wanted Coach to win a national championship. Coach doesn’t hold any animosity; no one does. It was just one of those deals that happened. I thought it was beautiful. Not too many people get let go in March and then come back in October and get that kind of reception.”

And not many would hang around like Zimmerman has done.

“For whatever reason,” he said, “God has put into me loving the Razorbacks. I want the program to do well.”

A previous version of this story was published in Hawgs Illustrated