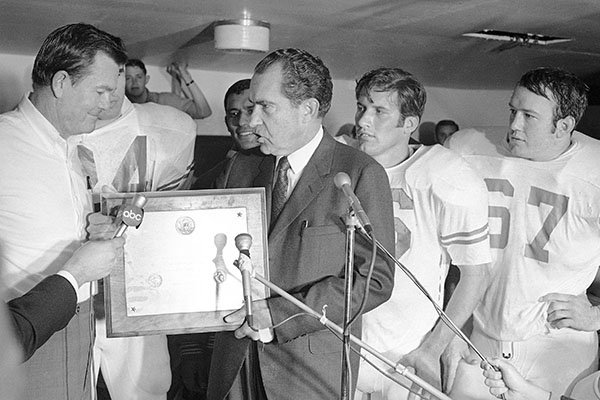 The game’s outcome (Texas won 15-14 after trailing 14-0 following three quarters of play) still bothers those of us of a certain age. That’s testament to the fact that Dec. 6, 1969, is among the most significant dates in Arkansas history. That hit home on a recent Thursday night when more than 900 people gathered at the Statehouse Convention Center in Little Rock to mark the 200th anniversary of the founding of the Arkansas Gazette. In his invocation, the Rev. Christoph Keller, dean and rector of Trinity Episcopal Cathedral in Little Rock, alluded to the game story written by the Gazette’s legendary sports editor, Orville Henry.

Keller, an Amherst College graduate who went on to earn a doctorate of theology in Anglican studies from General Theological Seminary in New York, is a gifted writer. He knew that a mention of Henry and the Big Shootout would resonate deeply with those of us age 60 and above. At the table where I was sitting, the conversation turned to that game. As the event’s emcee, I had the honor of sitting with former President Bill Clinton and Mack McLarty, Clinton’s boyhood friend from Hope and first White House chief of staff.

McLarty recalled a visit with President Richard Nixon in which he reminded Nixon that the president had come on ABC at halftime and predicted that Texas would come from behind. Clinton quickly responded: “Most people started to dislike Nixon during the Watergate scandal. People in Arkansas began disliking him when they heard that interview.”

I was only 10 when the game was played, but I have vivid memories of hearing Nixon at halftime and indeed thinking that I didn’t care much for this president. Nixon, a political creature to the core, could easily discern the difference in the number of electoral votes in Texas and Arkansas. Of course, it turned out that he was right.

For those of us old enough to remember, it’s one of those “where were you when the president was shot” or “where were you when man stepped on the moon” type of events. I remember attending an auction on Main Street in Arkadelphia that Saturday morning that was sponsored by my Cub Scout pack. I remember that we had a fire in the fireplace at home and that I watched the game on KATV while sprawled on the floor of our den. I remember being so upset when Texas’ Happy Feller kicked the extra point that made it 15-14 that I went to my room, got in bed and listened in the dark as Razorback announcer Bud Campbell called the rest of the game on the radio. I didn’t come out for dinner that night. The outcome had made me ill.

The fact that we still dwell on this game half a century later (rather than, for example, celebrating Arkansas’ win over Texas at Austin in 1964 en route to several versions of that year’s national championship) says something about our state’s collective inferiority complex. It also says something about just how important Razorback football was to Arkansans in the 1960s. Arkansas, a poor state that had been losing population for years, was the butt of jokes nationwide in the wake of the 1957 Little Rock Central High School desegregation crisis. No state lost a higher percentage of its population than Arkansas from 1940-60.

At a time when there wasn’t much to brag about, Frank Broyles gave Arkansans one of the nation’s top college football programs. As far as winning percentage, the best three programs in the decade were Texas, Alabama and Arkansas. When ABC moved the game to the end of the season (unheard of in those days), it put Arkansas in the national spotlight in a positive fashion.

In a story headlined “Texas By An Eyelash,” the great Dan Jenkins wrote in Sports Illustrated: “For three quarters, as probably 30 million viewers must have seen on television, Arkansas did practically all of the bloodying. Bill Montgomery, a marvelous quarterback most of the day, passed and ran the Longhorns into a state of shock and his own team and fans into their loudest afternoon of any year ever. A furious Arkansas defense swarmed on Texas to cause four fumbles and two interceptions while Montgomery and his roommate-end, Chuck Dicus, combined to bedazzle their visitors for 14 points and what seemed like the safest lead since Orval Faubus rode in a motorcade.

“Watching the emotional Razorbacks bounce Texas around on its AstroTurf for 45 minutes—blasting out those fumbles and picking off those interceptions with their hard hitting—one could think only of [Darrell] Royal’s sober warnings of the day before. ‘They’re gonna come after us with their eyes pulled up like BBs,’ Darrell said. ‘And they’ll be defending every foot as if Frank Broyles has told ’em there’s a 350-foot drop just behind ’em into a pile of rocks. If you believe that, you’re pretty hard to move around.’ Arkansas was certainly that. Until the first play of the fourth quarter, the closest Texas had driven was to the Arkansas 31-yard line, and most of the time it hadn’t been able to get across midfield.”

In the words of Razorback Cliff Powell: “It was like a script written just for us.”

For those of us in Arkansas, it was not to be. They say time heals all wounds. But inside this 60-year-old body is that 10-year-old boy, alone in his dark bedroom as a crestfallen Bud Campbell counts off the final seconds on the radio. After half a century, it still hurts.