It's up to Yurachek to end football's losing 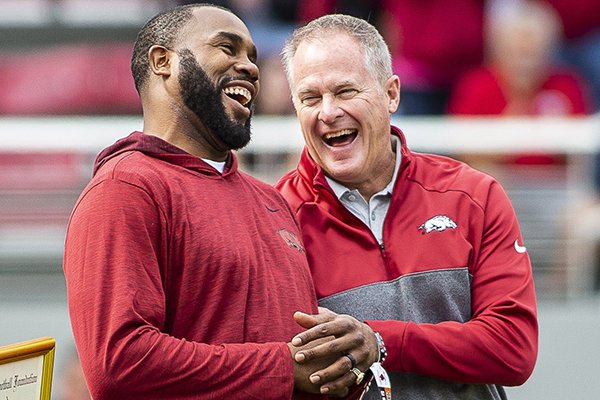 Arkansas athletics director Hunter Yurachek (right) laughs with former Arkansas running back Darren McFadden during a timeout of a game between the Razorbacks and Auburn on Saturday, Oct. 19, 2019, in Fayetteville. A federal lawsuit McFadden filed was recently dismissed without a public explanation.

No doubt, Hunter Yurachek has been burning the midnight oil and jet fuel trying to find the University of Arkansas a new football coach.

He seems to have had a plan, and he definitely needs to have a plan.

This is the lowest point in Razorback football history, and the wrong hire could be more than a mistake — it could be fatal.

If the search is focused on Lane Kiffin, then no doubt Yurachek has talked to more than just his agent, Jimmy Sexton, who is right now at his very best.

This is Sexton’s Christmas.

The reason for his season is to negotiate deals for his coaches, and he plays one school against the other better than anyone in the country.

It is believed Julie Cromer fell under his spell two years ago during the coaching search.

It would not be a shock if it is reported today that Sexton has told Ole Miss officials that if they don’t hire Kiffin, then Arkansas will and vice versa.

What Arkansas needs right now is the right guy whether it is Kiffin, Mike Leach or Barry Lunney Jr.

Most likely a call was made to former USC athletic director Pat Haden about why he fired Kiffin and left him on the Tarmac after returning from a game at Arizona State in 2013.

Surely someone talked to Nick Saban, who fired Kiffin after Kiffin already had quit. Kiffin had accepted the Florida Atlantic job but was staying on as offensive coordinator through the national championship game.

A week before the game, Kiffin was told to hit the road jack and don’t look back.

What the UA football program needs today is a head football coach with accountability.

A guy who would have looked at John Chavis after Week One and said fix it. Fix it now.

Razorback fans deserve a coach who doesn’t lose to San Jose State and Western Kentucky because he thinks all he has to do is score a bunch of points.

The hurry-up, no-huddle offense is not unique anymore. Both the Spartans and Hilltoppers ran it better than the Razorbacks.

Saban hired Kiffin to put in a passing attack.

Arkansas needs a coach who will run the ball 50 times if it means winning 14-7. A coach who can find a way to get six wins on a schedule that is made out to have four gimmes.

What the fans deserve is preparation and 60 minutes of head-knocking effort. They need a head football coach that finds solutions, not places to cast blame.

The program is not going to challenge for the SEC West title soon, but it can in time if someone is hired who has a blueprint for success that is more than throwing the ball down the field.

The Hogs need a coach who recognizes and appreciates the importance of the guys who do the blocking and tackling, which are the basic fundamentals of football.

Razorback football starts with Arkansans. Generously sprinkle in some Texans, add a pinch from the contiguous states and teach them how to play winning football.

It must be someone who respects and appreciates the rich history and tradition of Razorback football, not someone looking for a steppingstone to a bigger job.

The Razorback Nation has deserved better for the past four years.

This is the time to fix it.

It isn’t up to Sexton, Jon Fagg or especially yours truly.

Yurachek was hired to get the program turned around, and that only happens if he finds a football coach who finds ways to win.

The Razorback players were better than 2-10 the past two seasons, but instead of winning they found ways to lose. That has to stop now.