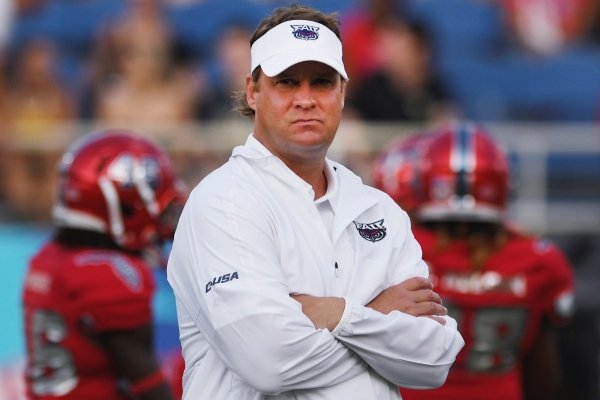 FAYETTEVILLE -- Florida Atlantic Coach Lane Kiffin has led his Owls to an appearance in Saturday's Conference USA Championship Game against Alabama-Birmingham, but he seems to be getting as many questions about the University of Arkansas vacancy as the title matchup.

"I hear from a lot of coaches that have been fired and want jobs," Kiffin said when he met with local media Wednesday, according to the South Florida Sun-Sentinel. "Or want to go to one of the schools that's been reported [to have interest in Kiffin]. That's what really blows my phone up. Usually all of a sudden everybody is really nice.

"Even this week, your own coaches and everybody upstairs [in the FAU administration] have been really nice. Had like five people ask me if I wanted dinner. 'You good coach? You need dinner?' "

Kiffin is among the coaches who have interviewed with Arkansas Athletic Director Hunter Yurachek and deputy athletic director Jon Fagg, according to numerous media reports.

Yurachek and Fagg met with Kiffin on Sunday when they flew to Boca Raton, Fla., where the Conference USA Championship Game will be played at FAU Stadium.

Other candidates Yurachek and Fagg have met with, according to reports, are Washington State Coach Mike Leach and Tulane Coach Willie Fritz.

In addition to the jet carrying Yurachek and Fagg to Boca Raton, New Orleans -- where Tulane is located -- and Lewiston, Idaho -- which is 34 miles from the Washington State campus in Pullman, Wash. -- it also made a trip to North Wilkesboro, N.C., which is 40 miles from Boone, N.C., and Appalachian State.

Mountaineers Coach Eliah Drinkwitz, an Alma native, has led Appalachian State to an 11-1 record and an appearance in Saturday's Sun Belt Conference Championship Game against Louisiana-Lafayette.

Yurachek and Fagg have completed their interviews, according to multiple sources. If the Arkansas search continues into the weekend, it's a sign Yurachek is waiting to finalize a deal with a candidate who is coaching his team on Saturday.

Kiffin declined to confirm or deny reports about Arkansas' interest in hiring him when he talked with media on Wednesday.

"I don't comment on job searches, never have, and what's going on with them," Kiffin said. "So, not going to start now."

"If you get mentioned for a job, it's usually because you're winning," Kiffin said on Tuesday when he spoke on a teleconference promoting the Conference USA Championship Game.

Kiffin was 7-6 at Tennessee in 2009 in his only season as the Vols' coach. He then left for USC, where he previously had been an assistant coach under Pete Carroll.

Ed Orgeron, who has led LSU to a 12-0 record and whose Tigers will play Georgia on Saturday in the SEC Championship Game, replaced Kiffin as USC's interim coach.

After Kiffin was fired at USC, he returned to the SEC, where he was Alabama's offensive coordinator from 2014-16 before landing the FAU job. He also was an NFL head coach with the Oakland Raiders earlier in his career.

Kiffin's total financial package at FAU this year is $1.4 million, according to a USA Today database of coaches' salaries. If he leaves FAU before Jan. 1, 2020, he owes the school a buyout of $1.5 million.