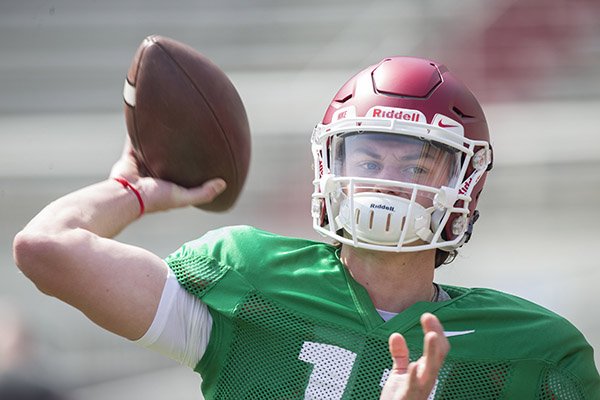 “I’m very grateful for the memories and lifelong friends I have made here,” Hyatt wrote. “I wish nothing but the best for my brothers in the future.”

Prior to the 2019 season, Hyatt transitioned from quarterback to receiver. In his announcement, Hyatt noted that he plans to “continue to pursue playing quarterback.”

A native of Arab, Ala., Hyatt redshirted in his first year on campus and briefly appeared in the 2018 season opener against Eastern Illinois. He did not see the field in 2019 after suffering a hamstring injury in preseason practice.

Hyatt was a four-star prospect by ESPN out of high school and rated the No. 9 pocket-passing quarterback in the nation. He chose Arkansas over scholarship offers from Louisville, Miami, Missouri, Vanderbilt and other programs.

Hyatt is the second Razorbacks player to announce plans to transfer since the end of the 2019 season, joining redshirt freshman offensive lineman Silas Robinson.