King: Remembering my assignment at the Big Shootout 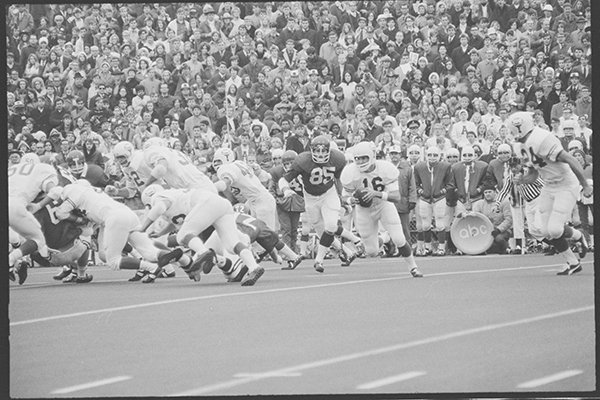 Texas quarterback James Street (16) runs with the ball during a game against Arkansas on Dec. 6, 1969, in Fayetteville. (Shiloh Museum of Ozark History /Northwest Arkansas Times Collection)

LITTLE ROCK — Assigned to cover the Arkansas dressing room on that cold Saturday in December, a decision to exit the press box after three quarters produced unexpected results.

The original idea was to gather some nuggets on the UA sideline, but with Arkansas leading 14-0, there was an audible — secure a position on the Texas side to take notes about celebrants bound for the Razorbacks’ small dressing room near the south end zone. Even after Texas quarterback James Street broke loose for 42 yards, benefiting from what some fans will forever cite as a clip, on the first play of the fourth quarter, Arkansas was ahead and on the move.

Texas 15, Arkansas 14 sabotaged the grand plan, but that low-level vantage point is responsible for memories of the game’s biggest plays and a portrait of parenting at its best that have lasted far longer than any on-field happening witnessed during decades seated high above the field.

Chronologically, a snapshot of those moments:

• Fueled by three Bill Montgomery completions, Arkansas responded to Street’s touchdown and the Longhorns’ two-point conversion with a 73-yard drive to the UT 7. Monitoring the action, I watched from a few yards inside the Texas 30 as Montgomery, under pressure, threw to the end zone on third down. Screened by on-field humanity, a Texas celebration signaled interception.

Montgomery recently told the Little Rock Touchdown Club that he believed Frank Broyles never watched the game film because of the coach’s decision to throw instead of run to set up a field goal. Broyles’ backers contend Montgomery underthrew Chuck Dicus.

• Between the 30s was off limits to the media, so some of us flipped ends of the field when the Longhorns passed their 30 around the five-minute mark. From there, seeing the football in the air was the first sign that Street had thrown deep on fourth-and-3. Near the UT sideline, the pass was somehow complete, and “18 came close” was scribbled in the stenographer’s notebook. Later, the names of tight end Randy Peschel and defensive back Jerry Moore filled in the blanks along with the note that the play netted 44 yards to the Arkansas 13.

• Moments after losing one of the most ballyhooed college football games in history, Broyles embraced a post-game tradition and walked across the field with his 11-year-old twin girls, speaking eloquently about being a father without uttering a word. To appreciate his action, review the heartbreaking circumstances that produced 15-14 — a two-touchdown lead after 45 minutes, interception in the end zone, fourth-down completion. But, the girls anticipated the cross-field hike, and he was in place — a rock between Betsy and Linda.

“As I recall, dad could not look at me because I was crying,” Betsy Arnold said recently in response to an email. “I don’t believe he could speak. He was just keeping it together.”

Rarely did their dad have much to say to them after a game, she said, but “we loved walking off the field with him.”

“We would run out on the field and he would talk to the opposing coach, then off to the dressing room,” she said.

In the Razorback dressing room that day, nothing memorable was uttered within earshot.

No matter the final score, Texas coach Darrell Royal was much more likely than his golfing buddy Broyles to coin a memorable phrase, and that proved true on this day.

Hopefully, the story produced for The Associated Press story accurately portrayed Broyles’ post-game words as emotional and heartfelt and included some of the quotes in the Arkansas Gazette story on Dec. 7.

Regarding the end zone interception, Broyles said there was a decision to be made and “we made it.”

“You can’t replace them,” he said. “You have to live with them.”

Meanwhile, when asked about sending the tight end deep and throwing on fourth down, Royal said: “In a case like that, you just suck it up and pick a number. There’s no logic to it. Just a hunch.”

The non-football memories from Dec. 6, 1969, begin with unsolicited help from an unknown somebody and include a most gracious welcome at 1525 Hope St., good advice from the wife of a former boss/friend and a quest for two motel rooms.

Ashamed to admit it, but not until after filing copy did I notice my spouse sitting in a corner of the press box, thanks to a gentleman who realized she remained in the stadium for a reason and invited her to the work area.

Hours after the game she was still sporting a red cowboy hat with a white ‘A’ and for good reason — snow had soaked through the fan-favorite chapeau to the point that her bouffant hair included an indention, both pronounced and embarrassing.

Departing the press box with two media friends, the four of us followed directions for the first and only visit to Broyles’ home. Inside, complete with tablecloths, long folding tables were back to back in a couple of rows. Memory of the crowd size is vague, but a minimum of 40 or is a safe estimate.

Same as with the smaller and regular post-game gatherings — easy to schedule before there were lights at Razorback Stadium — Broyles’ wife Barbara fixed steaks, twice-baked potatoes and dessert. Homemade fudge was her favorite, but all I remember was the yummy meat.

Arnold says she learned much about football through the years, listening to the technical talk after the crowd dwindled. Eventually, Broyles turned the dining room into a film room and Arnold sat with him while he broke down film of an opponent.

Football was all the talk the night of Dec. 6, and Broyles moved from table to table, doing the mingling thing with incomprehensible class and fielding questions that were uncomfortable at times. In the same situation, a lesser man would have excused himself after a brief obligatory appearance.

Preparing to leave, Carolyn Henry — wife of long-time Arkansas Gazette sports editor Orville Henry — approached, told us goodbye and added, “I don’t want you kids to go down the hill.”

Responding to the U.S. 71 reference, we changed plans and headed north to spend the night, sans a change of clothes, deodorant or toothbrush. Considering that some media members spent much of game week as far away as Bella Vista, finding rooms in Springdale was surprising and welcome.

Finally headed back to Little Rock on Sunday, Razorback rehash was only a small part of the conversation during the three-hour-plus drive. By then, everybody had had enough of “The Big Shootout.”