Recalling the key figures in the Big Shootout 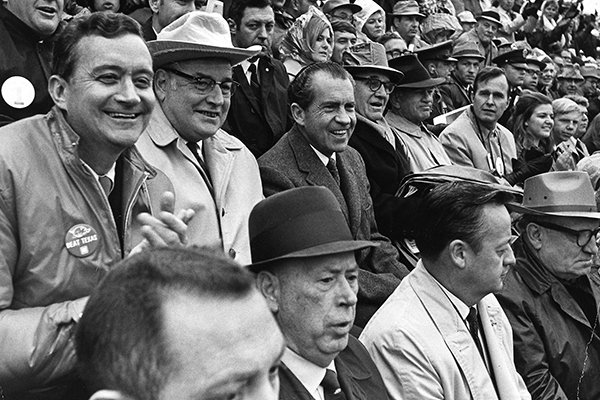 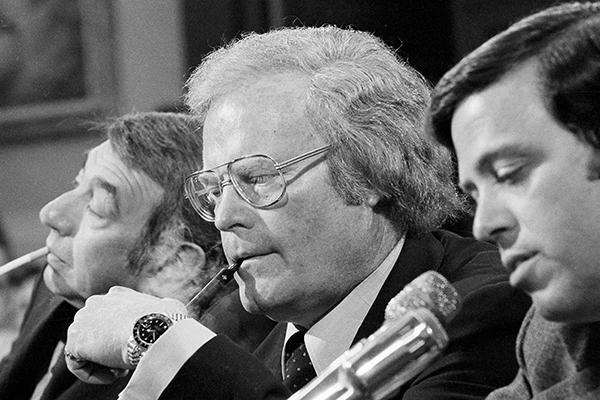 The president of ABC Sports from 1968 to 1986, Arledge was credited with creating some of the most iconic television programming in broadcast history including Monday Night Football and 20/20. Arledge, along with the colorful college football analyst Beano Cook, came up with the idea to move the annual Arkansas vs. Texas game from its usual October date to the end of the season. They guessed that both teams could be undefeated and highly ranked. Arledge later took over as president of ABC News and was with the broadcast company until 1998. Arledge died in 2002 at the age of 71. 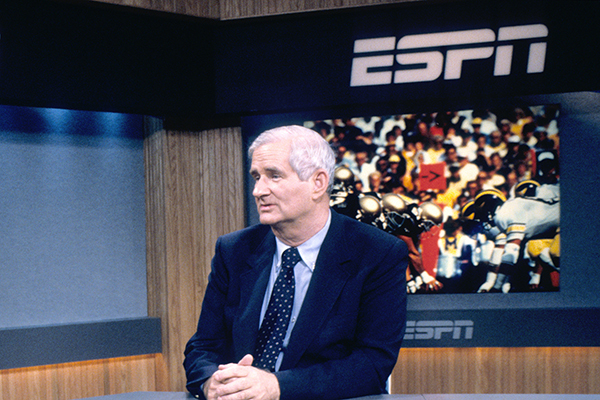 Beano Cook is shown having a discussion on the SportsCenter studio set in 1987. (Photo Courtesy ESPN Images)

Cook was the media director at ABC Sports in 1968 when he was approached by ABC Sports president Roone Arledge about creating a made-for-television college football game featuring the top two teams in the country. Cook studied the schedules of the teams expected to contend for the national championship and targeted Arkansas and Texas as potentially being undefeated at the end of the regular season. The two old Southwest Conference rivals had always played in mid-October, but Cook convinced the schools to move the game of the end of the season. The late Texas coach Darrell Royal said Cook and Arledge were “smarter than a tree full of owls” for setting this winner-take-all game almost a year before it was actually played. Cook later worked for ESPN from 1986 to 2012. Cook died in 2012 at the age of 81. 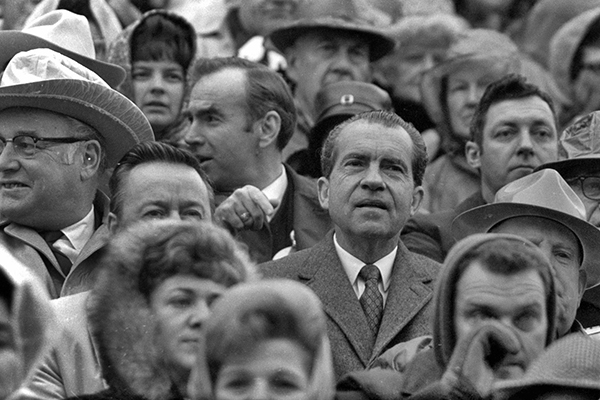 President Richard Nixon is shown during the Arkansas-Texas game on Dec. 6, 1969, in Fayetteville. (Arkansas Democrat-Gazette File)

The 37th president of the United States, Nixon took office in January 1969 to lead a country in turmoil with racial strife and the Vietnam War. Although Nixon had defeated Hubert Humphrey in a close race in November 1968, he was looking for ways to increase his popularity with young voters. When it was suggested that attending the biggest college football game of the season and presenting the winning team with the national championship plaque would put him in the spotlight, he jumped at the chance. Although not documented, it is thought to be the first time a sitting president had attended a college football game pitting the No. 1 vs. No. 2 teams in the country. Nixon was re-elected in 1972 by a landslide over George McGovern, Nixon resigned the presidency two years later after the Watergate scandal. Nixon died in 1994 at the age of 81. 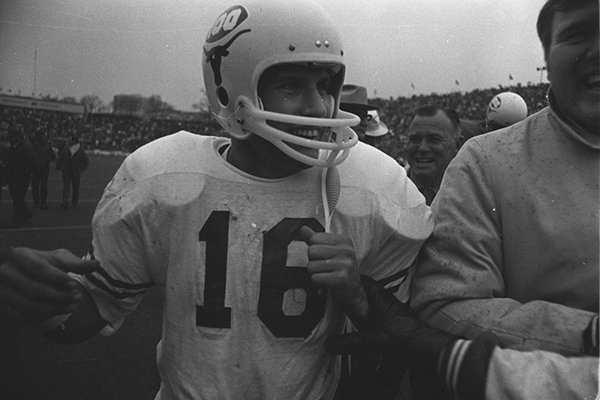 Texas quarterback James Street smiles as he walks off the field following the Longhorns' 15-14 victory over Arkansas on Dec. 6, 1969, in Fayetteville. (Arkansas Democrat-Gazette File)

The senior quarterback for Texas led the Longhorns on the game-winning drive in the fourth quarter in the 15-14 win. Street was the wishbone quarterback known more for his running ability than his passing prowess, but his gutty fourth-down pass to Randy Peschel set up the winning touchdown. Street also scored on a 42-yard run earlier in the fourth quarter. Street led Texas to the 1970 Cotton Bowl championship a few weeks later. He was 20-0 as the starting quarterback at Texas. He was also a standout baseball player at Texas and was drafted by the Cleveland Indians, but never played professional baseball. He is the father of relief pitcher Huston Street who led Texas to a national championship in baseball and played professionally for several teams. James Street died in 2013 at the age of 65. 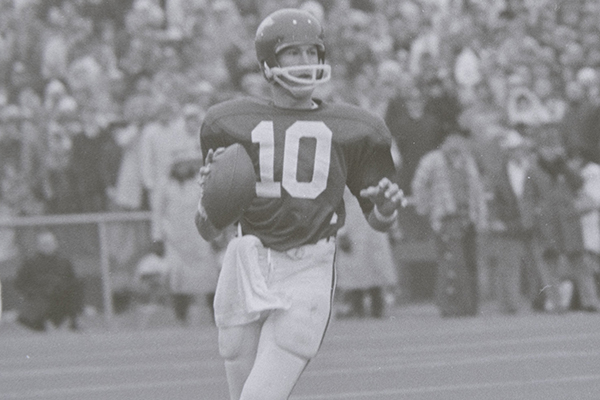 Arkansas quarterback Bill Montgomery looks to pass during a game against Texas on Dec. 6, 1969, in Fayetteville. (Shiloh Museum of Ozark History/Springdale News Collection)

The junior quarterback for Arkansas set almost every school passing record in his three seasons as a Razorback and led the program to a 28-5 record as one of the winningest quarterbacks in program history. Montgomery led Arkansas to a win over Georgia in the 1969 Sugar Bowl as a sophomore and was an All-Southwest Conference selection as a senior in 1970. He was inducted into the Arkansas Sports Hall of Fame. After his college career ended, Montgomery, who graduated from Carrolton (Texas) R.L. Turner High School, returned to the Dallas-Fort Worth metroplex where he worked in real estate. 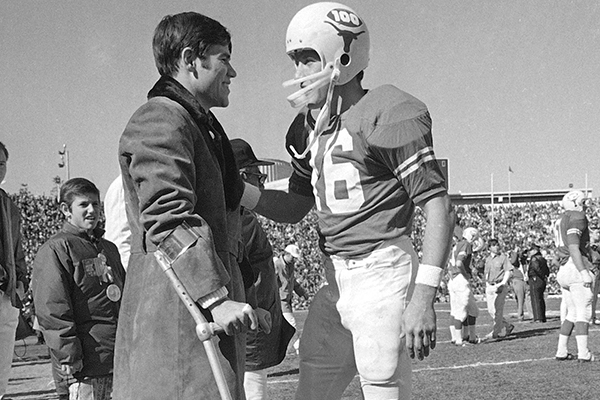 Freddie Steinmark, University of Texas football star who lost his left leg to cancer, chats with Texas quarterback James Street on the sidelines before the start of the Notre Dame-Texas Cotton Bowl game in Dallas, Jan. 1, 1970. Steinmark left the hospital in Houston to attend the game. (AP Photo)

The Texas defensive back was one of just a handful of players on the 1969 roster not from Texas, but he will always be a Longhorn legend. Steinmark played in the Big Shootout despite a painful, nagging left leg injury. Two days after Texas defeated Arkansas, Steinmark had the leg X-rayed where a tumor was found just above his knee. Six days after the big game, doctors amputated his leg at the hip. Nixon, who had met Steinmark after the game, called the hospital in Houston after the surgery to wish him well. On crutches less than three weeks later. Steinmark was on the sideline for the 1970 Cotton Bowl. He battled cancer for another year before the disease took his life on June 6, 1971, at the age of 22. That same year, Nixon created the National Cancer Act, getting the inspiration from Steinmark’s illness. 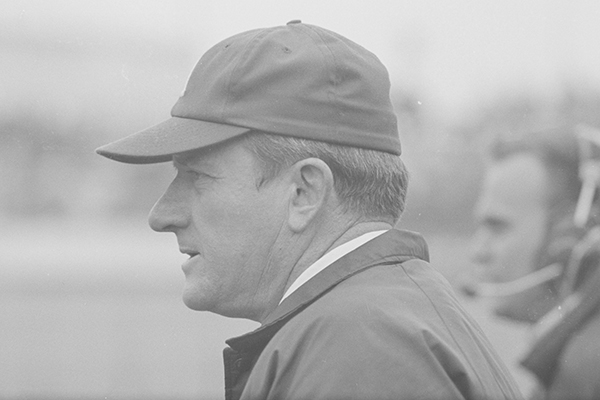 Arkansas coach Frank Broyles is shown on the sideline during a game against Texas on Dec. 6, 1969, in Fayetteville. (Shiloh Museum of Ozark History/Springdale News Collection)

The architect of the Razorbacks football program led Arkansas to its greatest run from 1958-1976 as the head football coach. Over the course of his career at Arkansas. Broyles compiled a 144-58-5 record at Arkansas that included the 1964 national championship, seven Southwest Conference championships and two Cotton Bowl championships. Broyles stepped down from coaching to focus on being Arkansas’ athletic director after the 1976 season. Broyles also spent eight years as a color commentator for ABC Sports college football games. Broyles died in 2017 at the age of 92. 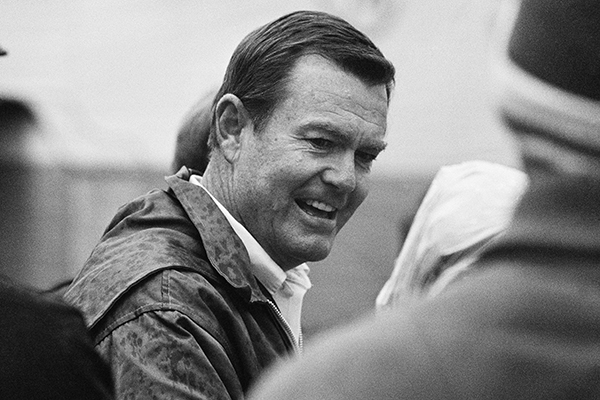 Coach Darrell Royal of the University of Texas Longhorns, smiles after his team defeated the Arkansas Razorbacks in Fayetteville, Ark., Dec. 6, 1969. (AP Photo)

The Texas coach led the program to three national championships (1963, 1969, 1970) and a record of 165-47-5. Over 23 seasons as a college coach at Mississippi State, Washington and Texas, Royal never had a losing season. Like Broyles, Royal was also the athletic director at Texas from 1962-1980. Royal and Broyles were close friends off the field, and ironically they coached their final game against each other in 1976. Royal died in 2012 at the age of 88.

OTHER DIGNITARIES IN THE CROWD

In addition to a sitting president, there was also a future president in the crowd as congressman (and future president) George H.W. Bush was part of the Nixon contingent along with National Security Advisor Henry Kissinger, Arkansas Gov. Winthrop Rockefeller and Texas Gov. John Connally, who just six years earlier was shot as a passenger in the car with President John F. Kennedy in Dallas when Kennedy was assassinated.

In the broadcast booth that foggy, cold December day was legendary college football coach Bud Wilkinson, who coached the University of Oklahoma to three national championships and a 47-game winning streak from 1953-57. Wilkinson and broadcaster Chris Schenkel called the game for ABC Sports. The duo also called the Game of the Century in 1966 Notre Dame vs. Michigan, and the 1971 Big 8 clash between Oklahoma and Nebraska.