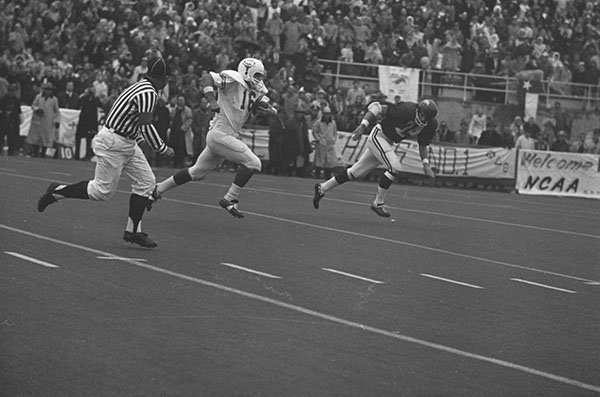 Texas quarterback James Street runs for a 42-yard touchdown during the fourth quarter of a game against Arkansas on Dec. 6, 1969, in Fayetteville. (Arkansas Democrat-Gazette File)

FAYETTEVILLE — Mike Boschetti still has flashbacks to Dec. 6, 1969, and the day Arkansas’ battle with Texas captivated the nation.

The Razorbacks’ right outside linebacker still sees Texas quarterback James Street pivoting, then diving short of his position at the end of the line on the two-point conversion that was one of the deciding plays in the 15-14 loss to the No. 1 Longhorns.

And, he still can feel the clip that got his heel on Street’s 42-yard touchdown scramble on the previous play. Clip is the word many used to describe the play that sent Boschetti tumbling to the turf in Razorback Stadium well short of Street’s mad dash.

“It was a clip, a penalty,” said former Arkansas linebackers coach Harold Horton, just this month, recalling the Street run and the lack of a call by the Southwest Conference officiating crew.

Boschetti, a junior from Pine Bluff on that day, went over the play in vivid detail by phone from his home in Little Rock. He’s lived in Little Rock since graduating from Arkansas. He works at Fellowship Associates, and he’s a top CPA with his hand in several businesses.

“I probably wouldn’t have caught Street anyway,” Boschetti said. “But no question, I got clipped.

“I can remember it well. I went into my hook zone for pass defense, and Street started to scramble. I broke to my left and realized that he was going to be tough to cut off, so I changed my angle. I would have gotten him down the field. That was in a day when you could block below the waist, and someone dove for me and got my back heel. Maybe I wouldn’t have caught him, but I would have loved to have had a chance. It was a clip, yes, a penalty.”

Boschetti doesn’t see the Street touchdown or the Street two-point run as the only deciding plays. He has the right reasons, too. They were in the fourth quarter, but there are likely a number of plays that went the wrong way for the Razorbacks at different points in the game.

“It’s no different than the pass interceptions, starting with the one in the end zone that came later,” Boschetti said. “People point to that one. But it was no different than Street’s run. Or the fourth-down pass to Randy Peschel that Jerry Moore almost got.

Add them all up, and it was a victory for the Longhorns and a devastating loss for the No. 2 Razorbacks.

“That’s the way I look at it,” Boschetti said. “There are probably 20 plays in the game that decided it, not one or two. You make one or two of those 20, we win.”

Still, it’s just a few that pop into his mind.

“I’d be lying if I didn’t say I don’t think about that game,” he said. “I bet it’s once a month for sure the last 50 years, maybe twice. Sometimes it’s someone else bringing it up, but sometimes I just wake up in the middle of the night, and I’m thinking about it.”

Horton tries not to think about it. The man who coached three of the greatest Arkansas linebackers in his second year on Frank Broyles’ staff has never watched the game film of the Big Shootout.

“I remember seeing Boschetti clipped in the open field. I’m like Mike; I can see that two-point play, Street going to his left, to our right side.”

And there are vivid memories of the exchange from defensive signal-caller Charley Coffey from the press box. Horton, standing with Broyles, was on the headsets and signaled in the call.

“Charley was always a nervous type,” Horton said. “Obviously, Texas was going for two, and I was asking Charley for the call. He kept saying, ‘Squirrel, just a second, just a second.’ Finally, he said, ‘Squirrel, you call it.’ So I did.”

Squirrel was Horton’s nickname. He said his call was based on a belief that Texas would run the option and Street would keep. Powell, the middle linebacker, blitzed and would track the quarterback.

“It was what I thought they would run,” Horton said, “but Street just made a great play.”

Boschetti recalls the details, and it was what was discussed among the heart of the defensive front last month at the 50-year reunion of the 1969 team at a Friday night gathering at Fayetteville Country Club before the Auburn game.

“We sure did talk about it, and there were some things I hadn’t realized,” Boschetti said.

Some of it had to do with defensive end Rick Kersey’s knee injury on the play. The game accounts said Kersey was blocked by the Texas running back filling the hole ahead of Street.

“No, I knew that wasn’t right,” Boschetti said. “Rick got hit by Street, because Cliff slung Street around. You wouldn’t call it a missed tackle, because Cliff got him down. He was blitzing and tracking Street, and when he got him, he slung him into Rick, and that’s what got Rick’s knee.

“Cliff was coming from one side, and Rick was on the right and closing on Street. It’s kind of funny, but Rick told me at Fayetteville Country Club that he’s laying on the ground and Cliff looked down and said, ‘Get up, you are not hurt.’ Well, he tore his ACL, we found out.”

That doesn’t sound like a joking matter, but that’s the kind of stuff the linebackers can laugh about 50 years later.

“Great players,” Horton said. “All three would make All-SWC. Cliff and Lynn were All-SWC that year, Cliff was an All-America. Then, the next year Mike was All-SWC as a senior. And we had Guy Parker as a backup linebacker, too. He was very talented, too, and we used him a lot.

“Really, that entire defense was loaded. There were good players everywhere, and they all did their jobs.”

That’s what Boschetti said, too.

“It’s the thing that was stressed over and over, just do your job,” he said. “You stayed in your gap, because you knew the others would, too.

Boschetti said the coaching was superb and the game plan worked to deploy in a 6-2 front to stop the Texas wishbone. Monster man Bobby Field, a position that is akin to today’s strong safety, was brought to the line.

“We did not let them get the pitch wide,” Boschetti said. “I do not remember them getting the pitch one time.”

The Hogs played their tackles tight, over the guards. They hit fullback Steve Worster on every snap.

Bruce James, an All-American end, said something that hit home at their reunion, Boschetti said.

“I was talking to Bruce, and I’m not sure I ever heard this before last month,” Boschetti said. “Bruce said he knew we were going to be good when he came to school. He said Coach Broyles told him he had recruited a class that was a national championship-caliber team.

“That’s what we had, too. We had a chance to win the national championship with that talent. We had talent everywhere. Bruce said Coach Broyles told him about recruiting Bill Montgomery and Chuck Dicus, that he’d build an offense to suit their skills. That’s exactly what he did.

It’s been 50 years, and still Boschetti wakes up in the middle of the night and relives that same play. Every time he’s clipped, and every time it’s never called.