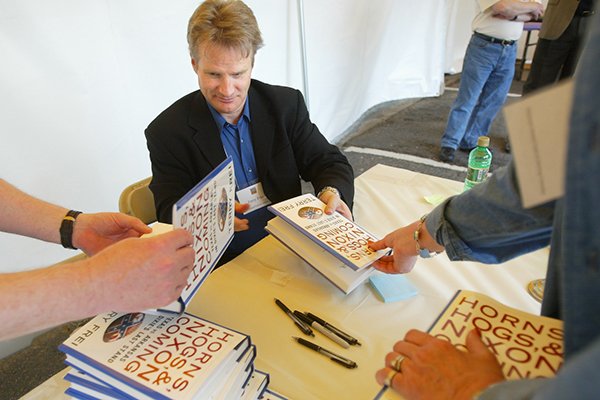 Terry Frei signs stacks of his book Horns, Hogs and Nixon Coming during the Arkansas Literary Festival Saturday afternoon in the Rivermarket.

Terry Frei was 2,000 miles away and just an interested young teen when the biggest game of the 1969 college football season was played on a frosty, foggy December day in Fayetteville.

An admitted college football junkie as the son of then University of Oregon football coach Jerry Frei, young Terry was enamored with college football. Like many across the country, Frei watched the spectacle dubbed the Big Shootout play out on his television screen in Eugene, Ore., as No. 1 Texas and No. 2 Arkansas clashed in the Ozark Mountains.

Frei had no link to the game or any of its participants at a time when the country was weeks away from turning the page on the most tumultuous decade in American history. But life is filled with twists and turns, and it sometimes has a way of pulling us into events that otherwise would not be a blip on the radar screen.

Terry Frei is an example of that.

“My father was a contemporary of Frank Broyles and Darrel Royal,” Frei said of the respective Arkansas and Texas coaches. “I was exposed to major college football in a very close up and sometimes painful and sometimes exhilarating way. I saw the game and was very interested in it from afar.”

Frei said the game, although played in the heart of the Dixie south, was a big deal even on the west coast.

“Being the son of a college football coach, it really caught my attention,” Frei said. “I also was kind of a political junkie/nut at the time, too, so all of these things kind of combined. Politicians in the stands, Richard Nixon going to the game, so that caught my attention.”

Two years after Texas ripped the hearts out of thousands of Arkansas fans with its 15-14 win, Terry Frei made his first connection with the game. It lasted a lifetime.

Following Oregon’s 1971 season, the Frei family packed up their belongings and moved to the Rocky Mountains, where Jerry Frei was hired as an assistant coach by the Denver Broncos. Jerry Frei spent the next 30 years in the Broncos organization as a coach, scout and administrator. He also has stints with Tampa Bay and Chicago Bears.

The disappointment didn’t last long once Terry realized the school his father enrolled him was a suburb of Denver and had a definitive connection to the college football game he intently watched a couple of years before.

On that Dec. 6 Saturday in Fayetteville, Freddie Steinmark did his best to try and cover Arkansas’ fleet receiver, Chuck Dicus. Steinmark gave a gallant effort but seemed to be hobbled by a gimpy leg. In the boisterous Texas locker room with U.S. President Richard Nixon after the game, Steinmark is seen in iconic black and white photos with a toothy smile and a shock of dark, sweat-dampened hair hanging over one eye.

In the midst of that celebration and the championship trophy presentation, Steinmark had no idea how his life would forever be altered in just a couple of days.

Steinmark was one of just three starters on the Texas team that did not grow up in the Lone Star state. Steinmark and fellow starter Bobby Mitchell were both Wheat Ridge Farmers.

Unbeknownst to any of the Texas players or coaches at the time, Steinmark’s left leg had been consumed by cancer. How he managed to play in the game at all was essentially a miracle in itself. Just six days after the game, the leg was removed at the hip.

“Freddie had passed away, but I was indoctrinated in the legend of Freddie Steinmark,” Frei said of his high school days. “I succeeded him as baseball captain and was really indoctrinated in his legend. I was very impressed by it.

“So the combination of being involved in the game as the son of a college football coach at the time, and ending up in the six degrees of separation world of going to the same high school as Freddie Steinmark had gone to, it really was a confluence of that perfect storm of circumstances was how I became so interested in the story.”

Flash forward to 1994 and Terry Frei was working for The Sporting News as a national football writer. His editor, John Rawlings encouraged his staff to pitch story ideas outside of their normal beats. Frei pitched the idea of doing a piece on the 25th anniversary of The Big Shootout, and Rawlings gave him the green light to pursue it.

With limited time, resources and other factors, Frei cobbled together a piece for The Sporting News.

“That was the one I picked out as one I absolutely wanted to do,” Frei said. “He was very supportive and let me do it. In all honesty, it wasn’t very good, because it was not very much in-depth. I barely scratched the surface.”

On the surface was the game itself, a spectacle that ABC Sports manipulated into made-for-television drama to end the 100th year of college football. The game was moved from its annual October date to the first week of December. Both teams did their part to arrive at the date undefeated and ranked 1-2 in the national polls.

Outside the white chalk lines of the playing field, the event had much deeper ramifications. There was the racial unrest at the time across the country, and particularly the south. Both teams had deep varsity rosters devoid of black players. The black students on the Arkansas campus were poised, ready to storm the field that day if the Arkansas band continued to play Dixie as its fight song. There were Vietnam protests outside the stadium.

Nixon, who had just been elected to office a year earlier, was trying to boost his public image by attending the largest sporting event in the country that day. Then you add in appearances by a multitude of state and national dignitaries — even the owner of one of the country’s leading fast-food chains — it’s no wonder the nation’s eyes were on Razorback Stadium. Even eyes in Eugene, Ore.

“There was so much more going on besides football,” Frei said. “The magazine story was barely adequate. For the length of the story at that time, it was good, but I was just shocked to find out how much more material there was.

“A literary agent approached me about expanding the article into a book. He initially had misgivings, but with The Sporting News story essentially serving as a proposal, the book was pre-sold to Simon and Schuster before I ever wrote a word.”

As he dived into the research for the book it seemed like for every nugget Frei found, there was a quarry of other nuggets that he uncovered.

Horns, Hogs and Nixon Coming was published in 2002. It is 343 pages filled with great detail of the game and all the events that swirled in the stands and outside the walls of Razorback Stadium.

“That’s what I was most proud of,” Frei said. “Going to the next level below the surface, I just kept stumbling across things. It wasn’t things that had never been told, although there were some things that hadn’t been told, too. So the combination of fleshing out and connecting the dots and also discovering considerable revelatory material, I think is what turned it into a much better book than a magazine story.”

Frei was in Fayetteville in 2004 when Texas made the trip to the Ozarks for the first time since the teams went their separate ways from the old Southwest Conference in the early 1990s. Players from the 1969 game from both Texas and Arkansas got together for a 35th reunion and invited Frei to speak.

“For the most part, I think the players loved it,” Frei said.” I pretty much told the story about everyone who started in the game on both sides of the ball for both teams. I made a lot of friends for treating it that way. I was very proud of profiling virtually everybody who played a major role in the game.”

In the 50 years since The Big Shootout was played, much has changed. Rosters were finally integrated the following season. Freddie Steinmark succumbed to cancer in 1971. Nixon was re-elected in 1972, then resigned two years later. Broyles and Royal met for the final time in 1976, then both never coached again. The Southwest Conference faded into oblivion shortly after Arkansas departed for the SEC.

On that gray day in 1969, the world looked on as one of the greatest college football games ever played filled their television screens.

Terry Frei was among the viewers, then became much more than that.