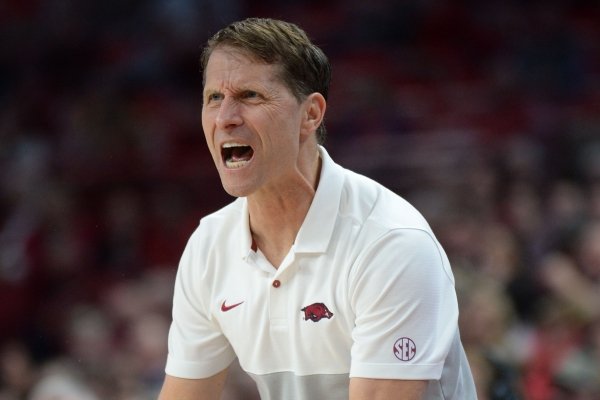 Arkansas coach Eric Musselman reacts Tuesday, Dec. 3, 2019, to a Razorback turnover during the second half of play against Austin Peay in Bud Walton Arena.

FAYETTEVILLE -- Not since the University of Arkansas won a national championship in basketball during the 1993-94 season have the Razorbacks won their first nine games.

This season's Razorbacks (8-0) will try to match that when they play Western Kentucky (6-3) at 6:30 tonight at E.A. Diddle Arena in Bowling Green, Ky.

CHALK TALK — Western Kentucky is 7-4 against Power 5 teams since the start of the 2017-18 season, including a 78-77 victory at Arkansas last season. … Hilltoppers Coach Rick Stansbury is 17-14 against the Razorbacks, including 16-14 when he was Mississippi State’s coach for 14 seasons. … Western Kentucky is 3-0 at home with victories over Tennessee Tech 76-64, Austin Peay 97-75 and Campbellsville 109-66. … The Razorbacks beat Austin Peay 69-61 on Tuesday night in Walton Arena. … Arkansas is playing at Western Kentucky for the second time. The Hilltoppers beat the Razorbacks 74-63 in Bowling Green, Ky., on Dec. 7, 1974, in Eddie Sutton’s first season as Arkansas’ coach. … Arkansas has lost three in a row to Western Kentucky since beating the Hilltoppers in back-to-back games in Little Rock during the 1945-46 season.

It's a promising start for Arkansas considering it was a preseason pick to finish 11th in the SEC and has a new coach in Eric Musselman.

Auburn, which is ranked No. 14 and rallied to beat Furman 81-78 in overtime on Thursday night, is the only SEC team besides Arkansas that remains undefeated.

"I'd rather be 8-0 than 0-8, I know that," Musselman said. "I think it's great for our players because I think it helps with buy-in to stuff that we're doing.

"I think the most important thing is that our guys that put in a lot of work over the summer feel like we're building and getting better each game. We've had some really good moments, and then we've had some really teachable moments where maybe I haven't been in the greatest mood or feel like we've got some holes we've got to continue to address."

The Razorbacks' most notable victory has been 62-61 in overtime at Georgia Tech on Nov. 25 in their only road game.

Arkansas is ranked No. 29 nationally by KenPom.com -- a popular statistics and analytical website -- but the Razorbacks' strength of schedule is No. 275, with seven of their victories coming at Walton Arena. Their opponents have an average ranking of No. 163, with Georgia Tech having the highest spot at No. 69. Northern Kentucky is second at No. 116.

"I think Eric's done a great job with that team," said Stansbury, whose Hilltoppers are the preseason pick to win the Conference USA title. "First off, any time you're 8-0, every coach in America would take that no matter who you've played or where you've played them at.

"Nobody's figured out yet how to beat Arkansas yet, so that's impressive."

The Hilltoppers beat the Razorbacks 78-77 last season at Walton Arena. They have three starters back who combined to score 58 points in that game with sophomore center Charles Bassey (21), senior guard Jared Savage (20) and junior guard Taveion Hollingsworth (17).

"We both have a lot of players back, but you can't look at last year's teams for us or Arkansas," Stansbury said. "We're different, and Arkansas is put together totally different with a new coaching staff."

Western Kentucky will have the edge inside with the 6-11 Bassey, but Stansbury said the Razorbacks present matchup problems with a smaller lineup that often features four guards, with the big man being 6-6 senior Adrio Bailey or 6-8 sophomore Reggie Chaney.

"People talk about how Arkansas doesn't have a lot of size," Stansbury said. "But they have the advantage most nights offensively with that quickness. Defensively you can offset a lack of size with quickness, too, which Arkansas has been able to do. So they're a really difficult team to play against on both ends."

Musselman said the Hilltoppers like to play a 1-3-1 zone defense at times, which the Razorbacks faced against Georgia Tech.

"We've added three different offensive sets against the 1-3-1," he said. "That will hopefully help our guys understand where the windows are in that thing."

"I think Whitt's probably been the difference in their team," Stansbury said. "He gives them a really versatile guy who can do a lot of things, and he's got a lot of experience. They've got moving parts and versatile guys that play multiple positions."

Musselman is the first Arkansas coach to win his first eight games in his debut since Eugene Lambert started 10-0 during the 1942-43 season, but he said the approach continues to be focusing on one game at a time.

"We'll have a terrific crowd here," Stansbury said. "Kind of like Arkansas does at home.

"People love basketball here. They're passionate about basketball. We've got a pretty good team to go with it."