State of the Hogs: McFadden back to New York, site of great Heisman heist 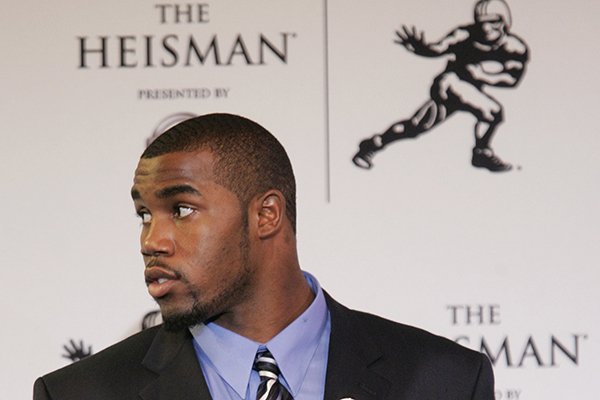 My Heisman Trophy ballot must be submitted early next week. LSU quarterback Joe Burrow is likely going to be the runaway winner.

I have no problem with voting for Burrow (I can’t disclose my ballot until after the vote), but I am concerned that once again the most outstanding football player in college football is not going to be the winner.

There is doubt in my mind that Burrow is better than either Auburn defensive tackle Derrick Brown or Ohio State defensive end Chase Young.

Because Brown and Young are not quarterbacks and lack overwhelming statistical support, they probably have no chance to beat Burrow.

This happens over and over in the race for the Heisman. Brown and Young are double- and triple-teamed on almost every play, the true measure of being the most outstanding player in college football.

And that’s the only criteria on the ballot that I’ve received since becoming a Heisman voter in 1978. It says vote for the “most outstanding” player in college football.

Too often it goes to the quarterback on the best team with the best numbers. It shouldn’t be that way.

In my own subtle protest on my three-player ballot each year, I always list at least one defensive player. I might escalate the protest this year by listing both Brown and Young.

There are usually blatant mistakes in the Heisman results. For example, Darren McFadden goes into the National Football Foundation Hall of Fame on Tuesday in a New York ceremony. It’s near the same place he was snubbed in both 2006 and 2007 when he was announced as second in the Heisman race, first to Troy Smith, then to Tim Tebow.

“It was wrong then, and it’s still wrong,” said Houston Nutt, McFadden’s head coach at Arkansas.

Nutt said he still has flashbacks of the two trips to New York when McFadden finished second.

“I sure do, and they are not good,” Nutt said. “We all know Darren should have won.”

“What I’ll always remember about Darren was that he was the ultimate teammate,” Nutt said. “We placed great emphasis on special teams, and they were important to him, too.”

Felix Jones was the main kickoff return man for the Hogs, but McFadden asked to join him for blocking purposes.

“We came in one Sunday, and Darren was waiting for me at the door,” Nutt said. “He nudged me and said, ‘Coach, how about that block?’ We put on the tape, and he pancakes the guy to spring Felix. It was an incredible block, and Felix went 100.”

That was forgotten until Nutt got to spring meetings in Destin, Fla. Sitting beside him was Florida coach Urban Meyer.

“Urban said he stole something about our kickoff return team,” Nutt said. “I thought he was going to point out something in our scheme. No, what he said is that he began to show tape to his team of Darren blocking his man to the ground.

“Urban said he told his team this is what an All-American does, and I just loved it. Darren did deliver blows.”

The physicality never left McFadden no matter the game or the situation. Danny Nutt and Tim Horton, his position coaches, both talked to McFadden about avoiding too much punishment.

“Danny would tell him late in the year about maybe getting down or stepping out of bounds,” Houston Nutt said. “You can look at all the tape and never find him doing it. He looked up people to hit.”

Horton was there in New York with McFadden in 2007. Now the running backs coach at Vanderbilt, Horton says McFadden is the best he’s ever coached, and that includes many great ones.

Auburn’s Kerryon Johnson was a good one, too, but Horton said he’d tell him to his face that McFadden was better.

“That’s no disrespect to Kerryon,” Horton said. “Darren was just that good.

“What hurt him at Arkansas was that Florida and Tebow were just on a bigger stage. Tebow had a better team. It’s the Arkansas market vs. the Florida market.”

McFadden had the numbers, but running back numbers don’t often compare to QB numbers. McFadden rushed for 1,830 yards and 16 TDs as a junior in ’07. He finished with 4,590 career yards and 41 TDs.

The story his sophomore year was that sophomores didn’t win the Heisman. Everyone forgot that unwritten rule the next year while voting for Tebow. It was a shame then and now.

“That’s what people were saying, he was a little too young as a sophomore,” Nutt said. “But why couldn’t they let Tim wait another year when he was a sophomore? That hurt.”

Horton said McFadden didn’t pay particular attention to the Heisman talk in ’07. Instead, he focused more on helping the Razorbacks win.

“Darren was just team-oriented,” Horton said. “In the end, though, he did want to win the Heisman, and he was disappointed, but I don’t think it was for himself. I think he wanted it for the state of Arkansas and for the Razorbacks.

“I never believed Darren played for individual honors. He played because he loved the game. He absolutely loved playing football. He loved the physical aspect of the game.

“It didn’t matter whether we were playing a game or just going out to practice or in a meeting before a practice, he loved football. He had the greatest qualities you could possess.”

McFadden won plenty of awards. He was the two-time winner of the Doak Walker Award, given to the nation’s top running back. He won the Walter Camp Award as a junior, and that’s the national player of the year award.

Going into the Hall of Fame doesn’t fix the injustice of not winning the Heisman, but it at least offers another chance to talk about it.