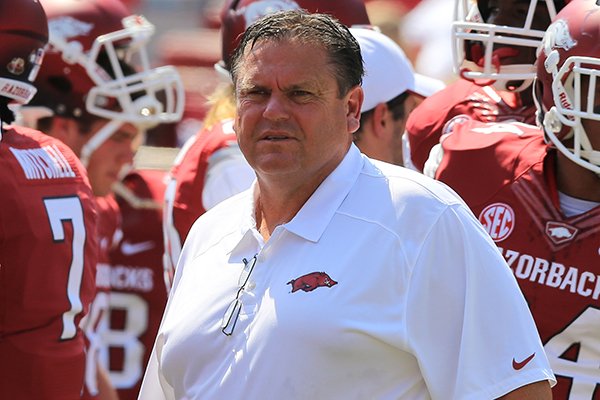 Arkansas offensive line coach Sam Pittman on the sideline during the Razorbacks' Aug. 31, 2013 game against Louisiana-Lafayette at Razorback Stadium in Fayetteville.

Several Arkansas high school football coaches approved of Arkansas' hiring of Sam Pittman, including one who called it a "freaking home run."

Even though he was in Fayetteville for three seasons before, Jonesboro coach Randy Coleman holds Pittman in high regards.

“Home run. Arkansas just hit a freaking home run,” Coleman said. “In my time as a high school coach, I’ve been fortunate to meet a lot of college head coaches. I live in Jonesboro and I’ve seen a lot come through here from ASU and U of A. Coach Pittman has the charisma to connect with players, high school coaches and fans unlike most in the business.

"I would argue that Arkansas football began to decline when they lost coach Pittman to Georgia, and I know a lot in my peer group that would agree wholeheartedly with that statement. He’s got it. I’m fired up.”

“I love me some Sam Pittman. Down to earth, amazing evaluator and recruiter,” he said. “He’s got connections in this sport all over the country, and he loves this state.”

“Coach Pittman is recognized as a great coach and recruiter,” Williams said. “I know people who have worked with him think the world of him. I know the players will be excited about him coming to Arkansas.”

Greenwood coach Rick Jones hasn’t interacted a lot with Pittman, but enough to think well of him.

“Sam is a people person,” Jones said. “Great relationship guy and reputation as a recruiter.”

“I think it’s a great hire,” Hembree said. “To win, it starts up front on both sides and he will get guys to compete at a high level up front. I love him. Had great relationship last time he was here.”

Little Rock Parkview coach Brad Bolding got to know Pittman during his first stop at Arkansas.