Better than a dream: Pittman humbled to be coach at Arkansas 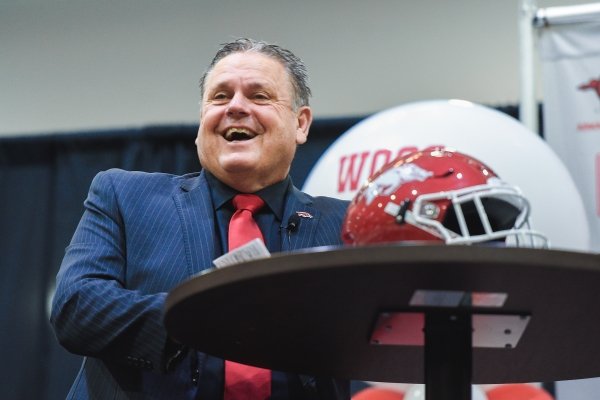 FAYETTEVILLE — Lou Holtz was Arkansas’ football coach in the summer of 1979 when Sam Pittman attended a Razorbacks football camp as an athlete from Grove, Okla., a small town 75 miles northwest of campus.

“When I was running that 4.8 out there (coaches) were like, ‘Pittman, you go over to this line right here.’ That’s the line where they ain’t going to look at you no more,” he joked. “There I sat, me and this other dude over there, and I go, ‘We ain’t never getting looked at.’”

Despite never coming close to receiving a coveted offer from Holtz and Arkansas, it did not take long for Pittman, who on Monday was introduced by athletics director Hunter Yurachek as the 34th head coach in program history, to fall in love with Fayetteville and the Razorbacks.

The majority of the population in Oklahoma is made up of Sooners and Oklahoma State fans. Pittman, though, always rooted for Arkansas. He and his uncle, who often sat in his car and listened to Razorbacks football games on the radio, shared a common passion.

Fifteen stops, which included jobs at the high school, junior college and Division I level, into what has already been a fruitful coaching career, Pittman is where he believes he belongs - leading Arkansas football.

“I don't know, I just always had a love for Arkansas,” Pittman said Monday. “Whenever we got an opportunity to come back here seven years ago - it seems shorter than that - that was one of (my wife) Jamie and I's dreams.

“Coming back now is whatever is better than a dream."

Pittman, Arkansas' offensive line coach under Bret Bielema from 2013-15, did not introduce new slogans or appealing catchphrases in his introduction to fans and media. His goal is simple: field a team and build a program that represents the state of Arkansas as best it can.

You can't be good at anything if you don't believe you are, he said, and the only way he knows how to change something, like a 19-game losing streak in the toughest division and conference in college football and back-to-back 10-loss seasons, is to put his head down and get to work.

"In my heart, I’m ready to be the head coach at Arkansas," said Pittman, an NAIA All-American defensive end at Pittsburg State in Kansas. "I mean, I am. I feel good about it. I need some guys around me. I have a wonderful athletic director who’s been very, very good to me the last two days and everything that I’ve asked.

The Southeastern Conference has long been lauded as a line-of-scrimmage league. The premier teams like LSU, Alabama and Georgia feature top-of-the-line talent and depth on the offensive and defensive lines. With Pittman's help in recruiting and guiding the offensive line, the Bulldogs won three consecutive SEC Eastern Division titles and made an appearance in the College Football Playoff in 2017.

Yurachek, who completed his second coaching search in a major sport in eight months, understood the need to focus first on line play. Pittman, the coach who attracted the likes of Frank Ragnow, Dan Skipper and Sebastian Tretola to Arkansas in his first stint in Fayetteville, was a fit.

"It’s time for our football program to no longer be at the bottom of the Southeastern Conference. I think we have found the right man to do that," Yurachek said. "Sam Pittman has proven he knows how to win football games in the trenches on both sides of the ball.

"I think that’s what you’re going to get from a football team at the University of Arkansas led by Sam Pittman, which is a tough, tough football team."

The one knock, perhaps, on Pittman is that he does not have prior experience as a Division I head coach. His last head coaching job was in 1992-93 at Hutchinson (Kan.) Community College, and he held two high schools jobs in Missouri before that.

Pittman's rebuttal to that argument?

"We'll try to put them all together and be the best program that we can be."

He is looking forward to instilling a blue-collar mentality with the Razorbacks.

"My belief, our belief, is that we're (going to be) a hardworking, tough, sic'em football team," Pittman said. "The only way you can do that is to go do it. We're going to pride ourselves on our toughness.

"Listen, you earn everything in life, and we want to earn the right to get our people in the stands. We know we have to earn it and, by golly, we're going to try to earn it."