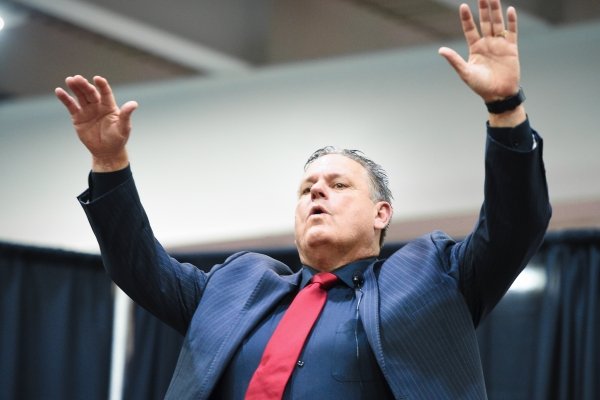 Coach Sam Pittman calls the hogs, Monday, December 9, 2019 during an introductory press conference at the Walker Pavilion in Fayetteville.

Hunter Yurachek’s announcement on Twitter that Sam Pittman was the new head coach of the University of Arkansas football team was received with lots of different emotions.

Most of them were relief that after four weeks, thousands of air miles, countless interviews and too many rejections that the Razorbacks had their man.

A man who knows more than a little about the school and played an integral role in the last period of success.

A man who left the UA for Georgia for personal reasons more than professional ones.

A man who appeared to be a career assistant but has worked under several coaches with various approaches to offense.

A man whose players would run into a burning house for him without asking why.

A man who has put enough players in the NFL to be considered a top-five recruiter.

A man who wanted to be at Arkansas. He jumped at the chance, in fact.

Where younger coaches wanted to talk about player personnel and why so many coaches have been fired, Pittman wanted to know when he could start.

The answer was immediately.

It doesn’t matter whether he was the first choice or fifth, Pittman wanted the job.

It doesn’t matter that Arkansas is in the SEC West, Pittman wanted the job.

Pittman grew up in Grove, Okla., just 72 miles away from Fayetteville. On Monday, he said grew up a Hogs fan.

For fun at the Jan. 1, 2018, Rose Bowl when Georgia faced Oklahoma in the first round of the College Football Playoff, he indicated he had grown up a Sooner.

So Pittman knows what it is like to perform on college football’s biggest stage.

He also knows how to get there, and it starts with hard work, something he’s been doing his whole life.

Pittman didn’t make it to the elite level of the SEC because he had a famous daddy, or because he was a one-year wonder at a small school where he took over someone else’s players.

He paid his dues by working his way up and producing.

Let him put together his staff, and he won’t have to look far to find some already on campus who can recruit Texas and teach football.

He is free to hire his staff, although he should be encouraged by Yurachek to keep Barry Lunney Jr. and look at three others.

That would go a long way to stop the bleeding of this current recruiting class, including getting two or three to re-commit to being Hogs. His hiring should slow down any rush to the transfer portal by current players.

He’ll get his staff together, and there will be progress next season. It just may not show up in the win column.

Yes, once again it is being written to be patient. The man is going to make some mistakes, but he will learn from them and make the Razorbacks better.

In due time, no one will enjoy those wins over Ole Miss and Missouri more, but he’ll never say a word about it.

In some ways, he’s old school.

The bragging is done on the field.

Having read thousands of words since Pittman’s hiring, it is not remembered exactly where this was read, but Georgia’s biggest loss last weekend wasn’t in the SEC Championship Game to LSU. It was losing the best offensive line coach, recruiter and tireless worker.

When Sam Pittman left Arkansas for Georgia, it was because of conflicts with then-coach Bret Bielema. There was even some yelling.

History has proven the Razorbacks lost that day and the Bulldogs won, until now.