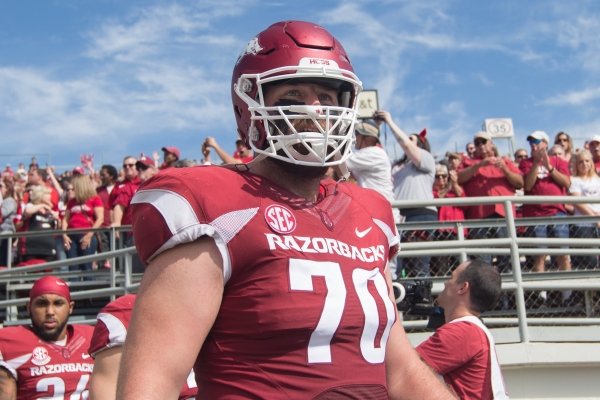 Dan Skipper walks onto the field prior to Arkansas vs. Alcorn State on Saturday, Oct. 1, 2016, at War Memorial Stadium in Little Rock.

What makes new University of Arkansas football Coach Sam Pittman one of the nation's top recruiters?

Ken and Brigid Skipper, the parents of former Arkansas offensive tackle Dan Skipper, looked at Pittman more like a family member than a coach.

Dan Skipper started 47 of 51 games as a Razorback, and was a two-time All-SEC performer. He was highly recruited out of Arvada (Colo.) Ralston Valley before signing with the Hogs over Ohio State, Tennessee, Ole Miss and Michigan in 2013.

Ken, Brigid and Dan visited numerous schools during the recruiting process, but Pittman made the decision an easy one for the Skippers.

"I think he relates to parents extremely well," Ken Skipper said. "I think he's very personable, down-to-earth. Great person with a great personality. I think he's able to transcend that with high school and college kids."

They marveled at Pittman's communication skills and ability to be a great listener. He took interest in all members of the family, including Matthew, the Skippers' oldest son.

"He always asked how Matthew was and how we were," Brigid Skipper said. "He paid attention to more than just Daniel playing football. It was how is school? How's life? How is dating? How is all of these things?"

The in-home visit is where Pittman excels.

"It's really like talking to one of your good friends," Ken Skipper said. "He's phenomenal at relationship building."

They learned what they called Pittman-isms.

Brigid Skipper said he was always at ease reaching out to Pittman during the recruiting process or when Dan was at Arkansas.

"When he first got there, Daniel had issues with his class schedule, and he didn't have time to eat," Brigid said. "I made one call to Sam, and I said, 'Sam, this can't be a big deal, but this has to be fixed,' and he was like, 'You're right. It's got to be fixed. I need this kid to gain weight.' "

Pittman left Arkansas after the 2015 season much to the dismay of the Skippers and the other offensive linemen and family members.

"When he left, we were upset," Brigid Skipper said. "A lot of people were upset. I'm sure the families at Georgia are steaming right now because those kids fell in love with him, and 98% of the moms did, too."

Pittman and the Skippers have remained in touch even after Pittman left Fayetteville.

"We have stayed in contact," Brigid Skipper said. "I know how busy he is. It's not like we talk on a regular basis, but he and Jamie called us this past summer and I text him after big games. It may take him a day or two, but he always gets back to me."

Dan Skipper originally committed to Pittman in June 2012 when he was at Tennessee, but after Derek Dooley and the staff were fired that season, Brigid Skipper talked to Pittman and first learned about his love for Arkansas.

"I asked him at that time if you had your choice of any school you could go to, where do you think it would be, and his number one statement at that time was I think I would really like to go to Arkansas," she said. "That was before [Bret Bielema] was hired. He knew at that time he wanted to be at Arkansas."

Ken Skipper said family is a big deal to Pittman.

Brigid and Ken Skipper agree that Pittman and his wife Jamie make a special team.

"What Arkansas has gotten is the first lady of football," Brigid Skipper said. "Jamie is very personable, but she also is a very strong leader of the coaches' wives, and she connects well with the kids as well and she's extremely supportive of Sam. I think it's a huge bonus, particularly for on-campus visits."

The Skippers plan to make it back to Fayetteville for the 2020 season.

"We're super excited to see great Razorback football come back and be competitive and compete for SEC titles," Ken Skipper said. "We already started thinking about coming back for some of the games next year."