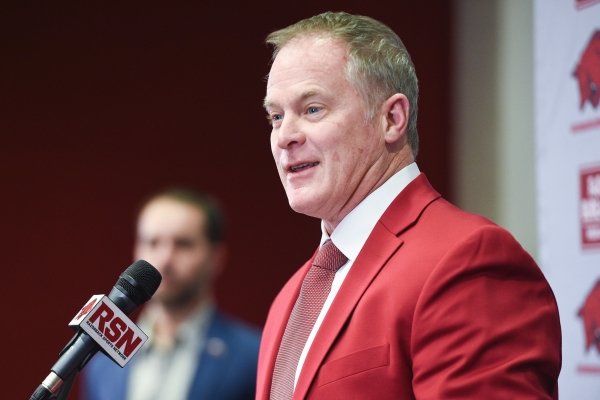 Hunter Yurachek, director of athletics, speaks, Monday, December 9, 2019 during an introductory press conference for Coach Sam Pittman at the Walker Pavilion in Fayetteville.

FAYETTEVILLE -- New University of Arkansas Coach Sam Pittman has signed a five-year deal that will pay him $3 million per year with various incentive clauses and an interesting buyout structure.

Pittman, 58, signed the offer letter Sunday, the day he agreed to become the 34th head coach at Arkansas and the fifth in 10 years. The Arkansas Democrat-Gazette obtained a copy of the offer letter Monday through a public-records request.

Pittman can increase his salary based on escalating win totals. His annual pay would increase by $250,000 if the Razorbacks win six games in a given year, $500,000 if they win seven games and $750,000 if the Hogs win eight or more games.

Pittman can trigger a pair of automatic one-year extensions if the Razorbacks compete in bowl games during his tenure.

The native of Grove, Okla., landed his first head coaching job since he was at Hutchinson (Kan.) Community College in 1992-93.

UA Athletic Director Hunter Yurachek, who has been vocal about reining in exorbitant buyout packages, got language in Pittman's contract that makes progress in that regard.

Yurachek told the crowd at the public celebration for Pittman at the Walker Pavilion on Monday that Pittman said he was not focused on his salary or the buyout.

Yurachek later reiterated in a news conference that he has said from his first day at Arkansas that coaches who are not successful should not be paid full buyouts.

"Coach Pittman is an old-school football coach, and he shared that principle with me," Yurachek said. "He had absolutely no concerns for a contract that I think provides really good protection for him. He thought that was really fair.

"We've got to stop in this industry these huge buyouts of multimillion-dollar contracts that we are providing to coaches. Coaches deserve some security, but boy, we've let some coaches go that -- if you look back at their Southeastern Conference records -- we have paid significantly for unsuccessful tenures with head football coaches.

"I was glad that Coach Pittman was with me to help change that narrative. Maybe this is just the start of something across the country."

The contract also includes a bonus structure based on bowl appearances, SEC and College Football Playoff championships or appearances, and individual awards such as SEC coach of the year.