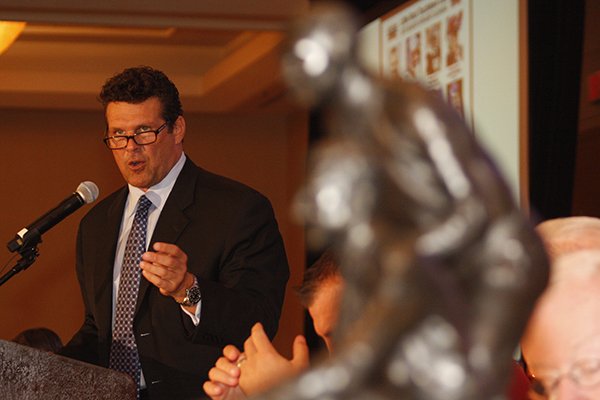 The Broyles Award, given each year to the outstanding assistant coach in college football, sits in the foreground while David Bazzel gives the opening remarks at the first Touchdown Club luncheon of 2013.

When David Bazzel approached Frank Broyles about naming an award after him, one honoring assistant coaches, Broyles was skeptical Bazzel could pull it off in the time frame he suggested.

Broyles also told him he wanted the focus solely on the assistant coaches, not him.

Bazzel rolled out of the meeting and went to work, commissioned a trophy and put together a group of coaches to vote when he hit a huge speed bump.

The trophy wasn’t close to what he had envisioned or requested.

Instead of calling Broyles and giving him the bad news, Bazzel went to get a haircut. Also getting her hair cut was Jan Woods, a noted sculptor (she’s finishing a huge piece for Oaklawn Park).

After a couple of sketches, an agreement was made between the two. Within a couple of weeks Bazzel had the trophy, the same model he gave to LSU’s Joe Brady on Tuesday.

Brady is the young genius passing game coordinator and receivers coach for the LSU Tigers, who will face Oklahoma in one College Football Playoff semifinal.

All five Broyles Award finalists were qualified and worthy of winning.

All five credited the coaching staff, but they emphasized without players they wouldn’t have a job.

All five wisely recognized their wives or girlfriends.

Brady is credited for creating the passing monster known as Joe Burrow, the quarterback of the undefeated Tigers.

Those are good numbers.

And he’s the favorite to win the Heisman Trophy.

The luncheon was at the Marriott ballroom in Little Rock, and it had a very nice rice dish as part of the meal. That’s a good thing since Riceland Foods is the presenting sponsor of the Broyles Award. It is also the No. 1 rice miller and marketer in the world.

Bazzel officially handed the award off to the Broyles family a few years ago, but he is still part of the the team that seems to make it better every year.

The Broyles Award remains focused on the assistant coaches, but it also recognizes the Broyles Foundation, which supports Alzheimer’s caregivers.

Recently, Betsy Broyles Arnold was asked for advice about caregiving. She and her daughter, Molly, presented a class to an entire church.

Barbara Broyles, Betsy’s mom and Molly’s grandmother, died from complications of Alzheimer’s in 2004. Frank Broyles dedicated the rest of his life to her fight from the day she was diagnosed until she passed away.

Every 65 seconds, someone develops Alzheimer’s in the United States.

Coach Broyles’ Playbook for Alzheimer’s Caregivers: A Practical Tips Guide has been distributed more than 1 million times in 11 different languages. For information on how to support the Broyles Foundation, visit BroylesFoundation.org or call (479) 313-5079.

Three of the five finalists said their families had been affected by the illness.

The Broyles Award has had 43 finalists become college or NFL head coaches, and 20% of all current head coaches in the FBS were winners or finalists for the award.

Utah defensive coordinator Morgan Scalley may not have won the award, but he won the room by leading them in a Hog call.

The Broyles Award luncheon was a walk-off home run.