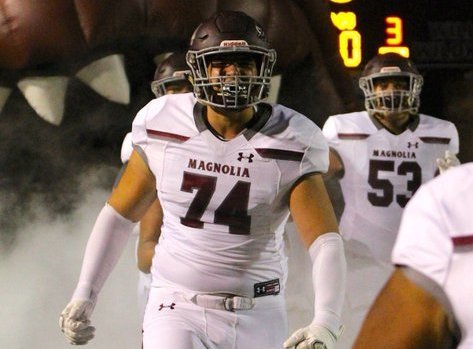 Two offensive line prospects have gotten to know new Arkansas offensive line coach Brad Davis during the recruiting process and think highly of the new addition to the Razorbacks' staff.

Senior offensive lineman Jalen St. John ll, 6-5, 310, of St. Louis Trinity Catholic, committed to Davis and Missouri in July but re-opened his recruiting after the firing of Barry Odom as the Tigers head coach.

“Coach Davis is great person, not just a coach, a great person,” St. John said. “He always asks me how I am and how are my grades. All the things that my parents ask me, so I definitely trust him and have a lot of love for coach Davis. It’s like as we met we just clicked. He’s just a real honest person and that’s what I like.”

He expects Davis and coach Sam Pittman to visit his school Thursday or Friday. He plans to officially visit Mississippi State on Jan. 17 and Tennessee on Jan. 25.

St. John feels like he can totally trust Davis.

“He knows some things about my family and what’s going on with me," he said. "Well, things that nobody else knows and I know for a fact he wouldn’t tell anyone.”

He attended a Missouri camp during the summer and received an offer from Davis.

“Coach Davis is someone I think really highly of as a coach and as a person,” Wykoff said. “He seems that he wants the best for his guys both on and off the field along with being a great coach and being able to process players to an elite level.”

“He’s a very real person in the way he tells it how it is,” Wykoff said. “He’s not going to beat around the bush with someone, which to me is a very good trait to have. And he seems to like to have fun and joke.”