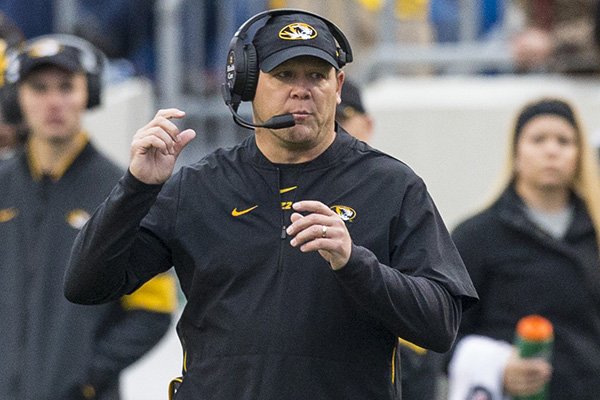 Missouri coach Barry Odom is shown during a game against Arkansas on Friday, Nov. 29, 2019, in Little Rock.

Asked about Odom on the Paul Finebaum Show, Pittman said, “I can tell you this, that I’m ecstatic that he’s in his car and headed down to Fayetteville as we speak. I’m ecstatic. I felt like I needed a guy on my staff who had been a head coach. Someone I could lean on and talk to.”

FootballScoop.com reported first on Friday that Odom was expected to land the defensive coordinator’s role for the Razorbacks.

Odom, 43, had been closely linked to the opening at Arkansas since Pittman was hired last Sunday.

However, he was a candidate for the head coaching vacancy at Memphis, where he had previously served as defensive coordinator and linebackers coach (2012-14) under Justin Fuente. Memphis made interim Coach Ryan Silverfield, who has been preparing the No. 15 Tigers for their Cotton Bowl appearance against Penn State, its permanent head coach on Friday.

Odom compiled a 25-25 record as head coach at Missouri, his alma mater. His final game as a 24-14 victory over Arkansas in Little Rock on the day after Thanksgiving.