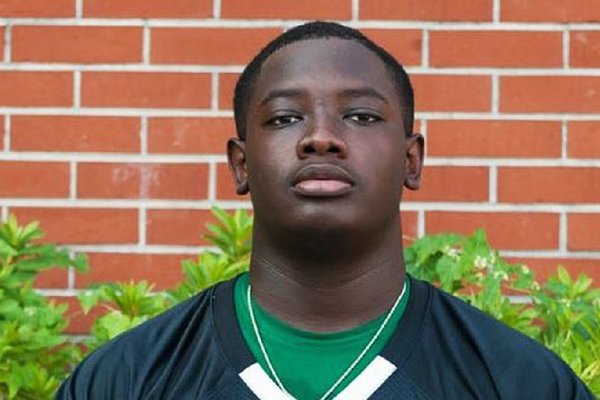 FAYETTEVILLE — Memphis White Station offensive lineman Ray Curry Jr. is having a busy weekend that will help him decide where he wants to play college football.

Curry (6-5, 315), who visited the Razorbacks unofficially the weekend former head coach Chad Morris was fired, finished up an official visit to Arkansas on Saturday and headed to Missouri, the program he committed to on June 3.

But a lot has changed in the last two weeks with Missouri head coach Barry Odom being fired at Missouri and both him and Tigers’ offensive line coach Brad Davis now being at Arkansas on Sam Pittman’s staff.

"This wasn’t my first time down, so I knew a lot about Arkansas and I have always enjoyed my time here,” Curry said Saturday after finishing up his visit. “It is quite the coincidence that who I thought was going to be my position coach at Missouri is now here.

“I really enjoyed my time with coach Pittman. He’s a great guy and really was staying genuine with me. It seems like he was telling me the truth and keeping it real with me and I love that, and I really loved being around him and his wife.

“The fact that both of those guys are offensive line coaches and are great ones certainly will be a factor with me.”

Curry, a three-star prospect and top-300 player nationally, per ESPN, had 27 offers from schools such as LSU, Alabama, Georgia, Auburn, Texas, Arkansas, Michigan and Mississippi State before pledging to Missouri.

He plans to sign on Wednesday when the Dec. 18-20 early signing period opens.

"(The lack of recognition), it motivates me to an extent," Curry told the Daily Memphian. "But I say this in the most humble way, I know my ability and I know what I can do. I know who I've played every week over the last two years. We play a legit schedule and I take care of my business. I'm real self-motivated.”

Memphis White Station head coach Reid Yarbrough believes that Curry is better than his ranking, but does acknowledge Curry missing some games due to injuries probably led to him not being ranked as high.

"I think there is some accuracy to it (the rating system,) but I come at it from a growth mindset,” Yarbrough said. “You might have a five-star that goes to college and doesn't get any better … but then you have guys you think will never contribute and end up being studs. There is some validity to it, but you've also got to take the long view of it and look at the potential of players."

Curry is one of at least four official visitors in Fayetteville this weekend, including Memphis Central wide receiver Darin Turner (6-4, 215), a four-star former Arkansas pledge who re-opened his recruitment when Morris was fired.