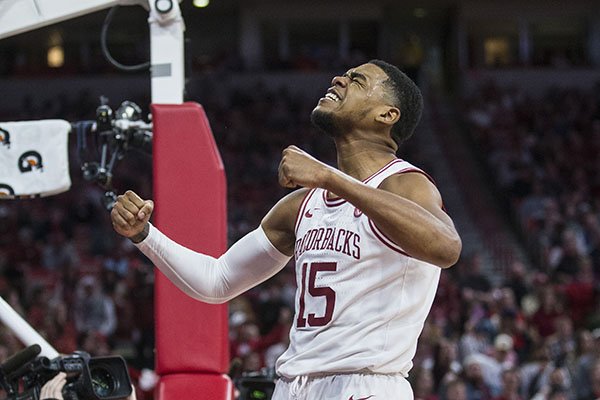 Arkansas guard Mason Jones celebrates after scoring a basket during a game against Tulsa on Saturday, Dec. 14, 2019, in Fayetteville.

FAYETTEVILLE — With a week to think about his worst shooting performance of the season, Arkansas junior guard Mason Jones said he just focused on one thing heading into Saturday's game against Tulsa: Bounce back.

Jones shot 1-of-9 from the floor in an 86-79 road loss to Western Kentucky last Saturday when he scored just 8 points in Arkansas' first loss of the season.

It was a complete reversal against Tulsa as Jones hit his first shot of the game, a 3-pointer 57 seconds in and finished with a career-high 41 as the Razorbacks rolled to a 98-79 win.

“I'm just glad we were able to bounce back and get the win,” Jones said. “That was all I thought about this week — bounce back. It was good to see that my energy led the way and it started off early. I wanted to let them know that I'm here and I want to set the tone. I knew when I set the tone good, the team would follow.”

Arkansas (9-1) built a 16-point first-half lead, then held off a Tulsa run midway through the second half that saw the Razorbacks' lead trimmed to single-digits.

Jones did his damage in a variety of ways, including five 3-pointers and three three-point plays on slashing drives to the basket. He also had six rebounds, four assists and four steals.

Most points by a Razorback at Bud Walton Arena

“His practice habits this week were awesome,” Arkansas coach Eric Musselman said. “He was locked in. I thought he was really good defensively. I thought he did a great job of mixing up perimeter shots with three-balls. As important as anything was his 13 free throws attempted, but he got it going tonight.”

Jones did not do it alone. Fellow backcourt mate Isaiah Joe scored 20 points and hit three of his first four 3-point attempts to help the Razorbacks grab an early double-digit lead that swelled to as much as 16 points with a little over 12 minutes remaining in the first half.

Joe, who was 8-of-14 from the floor and had four 3-pointers, said the week between games was big to help the team recharge from the loss to Western Kentucky.

“The more time, the better,” Joe said. “You get a longer time to work on new sets, work on all the mistakes you made in the last game. Having a week off, it gives our body time to recuperate and get as much treatment as possible and get a lot of shots up.”

Tulsa (8-3) rallied midway through the second half and pulled within nine points at 68-59 on Darien Jackson's breakaway layup with 11:49 left, but Jones had an answer, going on a personal 10-0 run that bumped Arkansas' lead to 81-61 with 8:07 left. In the run, Jones had a three-point play, a 3-pointer and four straight free throws.

Tulsa coach Frank Haith said his team had no answer for Joe and Jones.

“They got it going early and we just could not stop them,” Haith said. “I thought when we cut it to nine, we were playing a lot more aggressive, but then we hit a stretch there were we didn't score and they got it going again.”

Arkansas had only two first-half turnovers and just eight for the game. It’s an area Musselman said his team will need to continue to focus on with just two nonconference games left on the schedule before heading into SEC play on Jan. 4.

“Valuing the ball is so important,” Musselman said. “I even talked to the team, and I know my dad would be rolling over thinking about it, but I'd rather take a bad shot rather than turn the ball over. We use a soccer term — shots on goal. We have to get shots on goal. They at least have a chance to go in. And your defense can get set up. When you have live-ball turnovers, it's really difficult to win.”

With just five seconds left in the first half, Jones got the ball near midcourt and launched a shot at the buzzer that hit the back of the iron and bounced high above the backboard before coming back down through the rim for a 50-34 lead.

Jones thought he was also fouled on the play but didn't get the call.

Jones was 12-of-13 from the free-throw line, but missed his last attempt to break his string. Even with a comfortable lead and a 41-point scoring night, he was still thinking about that one miss.

“I pride myself on not missing free throws, so that hurt,” he said with a laugh.

Mason Jones scored a career-high 41 points and Arkansas emphatically bounced back from its first loss of the season at Western Kentucky. Jones' 41 points are the most in a game by a Razorback since Rotnei Clarke went for 51 in 2009. Isaiah Joe finished with 20 points on 8 of 14 from the floor.

The Razorbacks have another week off before hosting Valparaiso next Saturday in North Little Rock.

We'll have much more from today's game a little bit later on WholeHogSports.com.

Mason Jones now has a career-high 38 points today, and he will be at the line for a shot at 40 points when play resumes. He is 12 of 17 from the floor and 5 of 10 from deep to go with five rebounds and four steals.

Isaiah Joe still has 18 points. He missed on his previous two 3-balls and was subbed out of the game. Jimmy Whitt is the only other Razorbacks player in double figures with 11. He has five rebounds and four assists, too.

Mason Jones has it all working today. After a 3 from the top of the key, his third old-fashioned three-point play of the afternoon and a stepback midrange jumper from the right elbow, he has 33 points, which is a career high.

Isaiah Joe also has 18 points on 7 of 11 from deep and 4 of 8 from distance. The Razorbacks are starting to pull away thanks in large part to their stars.

Isaiah Joe has had a great second half scoring the ball. He has nine since the break, and Adrio Bailey has four. No other Razorbacks player has more than three, though. Reggie Chaney added his first bucket of the game earlier on a great perimeter find from Jimmy Whitt.

Desi Sills just committed a turnover near the rim attempting to find Chaney to send us to the under-12 media timeout. The ball ricocheted off Chaney's fingertips and out of bounds. Tulsa ball when play resumes.

Adrio Bailey has come to play in the second half after a slow start to today's game. He knocked down a stepback jumper from the right short corner, blocked a shot on the Razorbacks' ensuing defensive possession, then threw down a two-hand dunk the next trip down the floor. Bailey has six points and three rebounds in his 17 minutes.

Mason Jones hit another 3, this one from the left corner. He has a game-high 23 points on 8 of 12 from the floor and 3 of 7 from deep. Isaiah Joe is also up to 14 points after connecting on his first 3 of the season from the right corner, and a long 2-point jumper from the right wing.

Mason Jones has been terrific today. He has a game-high 20 points, capped off by his 28-footer at the buzzer to close the first half. I mentioned in the pre-game notes that he typically bounces back from off games, and he has certainly done that this afternoon.

Tulsa has kind of hung around in this one, but Arkansas has been good enough offensively to keep the Golden Hurricane at bay. Martins Igbanu has a team-high eight points and Brandon Rachal has seven on 3 of 5 from the floor.

Arkansas' 50 points are its most in a first half under Eric Musselman.

The Razorbacks have cooled off a bit offensively, but Mason Jones is leading the charge. He has a game-high 12 points and three steals. He just came away with a steal on the perimeter, ran the break and found Desi Sills for a layup to set the current score.

Prior to Sills' layup, Arkansas had missed six of its last seven shots. He has five points, and Isaiah Joe has nine points on 3 of 5 from deep. Joe also has three steals.

Arkansas is winning the points-off-turnovers battle 12-0. I like the commitment to the defensive end that we've seen today. It's been a group effort. Reggie Chaney has come off the bench and grabbed four rebounds, too.

While Mason Jones and Isaiah Joe carried the offensive load early on, Desi Sills and Jimmy Whitt have gotten in on the action. Whitt, on back-to-back possessions, knocked down midrange jumpers from the free throw line and SEC logo in the lane, and Sills hit his first 3 of the day from the right corner.

Sills is now 6 of his last 13 from deep, which is a really encouraging sign given his struggles in the first month of the season. He also has a pair of assists.

The building is hot. Arkansas has done a great job getting the crowd very involved in the game so far.

The Razorbacks are locking up on the defensive end. A hustle play by Isaiah Joe in which he dove on the floor for a loose ball near midcourt resulted in a Mason Jones layup, and Tulsa called for time. Arkansas is on an 11-1 run.

Joe has knocked down 3 of 4 from deep, and Jones has the Razorbacks' other five points. Tulsa is just 2 of 5 from the floor with three turnovers almost five minutes in.

Following Jones' layup, Eric Musselman again walked out to the SEC logo in the lane in front of the Arkansas bench and urged the crowd to get louder. That was an impressive stretch for the Razorbacks, who are getting it done on both ends at the moment and have the Golden Hurricane flustered.

Mason Jones and Isaiah Joe both knocked down their first 3-point attempt of the day. Joe's gave the Razorbacks a 6-4 lead, then he got back on defense and blocked a Tulsa layup. Jones also blocked a shot on the Golden Hurricane's first offensive possession.

Eager to see if Sills can build off his career game at Western Kentucky. He scored 20 points and knocked down 3 of 7 attempts beyond the arc. Sills, in December, is 5 of 12 from 3-point range while remaining aggressive in getting to the rim off the bounce. He is healthy and ready to go after taking a hard fall on his shoulder in overtime last Saturday.

Today is a bounce-back opportunity for Jones, who finished with eight points on 1 of 9 shooting at Western Kentucky. He also grabbed nine rebounds in the loss, but had he been more of a factor offensively, the Razorbacks might be 9-0. In his Arkansas career, Jones averages better than 17 points per game in outings immediately following a single-digit scoring effort.

Rachal is the player to watch for Tulsa. Through 10 games, he holds a personal offensive rating of 120.2 and a team-high usage rate of 25.1 percent. Rachal, according to KenPom analytics, draws 5.5 fouls per 40 minutes. One of his strengths is getting to the free throw line, where he is an 80 percent shooter. He is also shooting 62 percent on 2-point looks this season. Rachal scored 30 points against Austin Peay and 17 in a win at Vanderbilt.

Jeriah Horne and Jones are Tulsa's top threats on the perimeter. Both players have knocked down a team-high 16 3-pointers. Little Rock native Lawson Korita is second on the team with 12 triples on 30 attempts.