Haith's a winner vs. Hogs 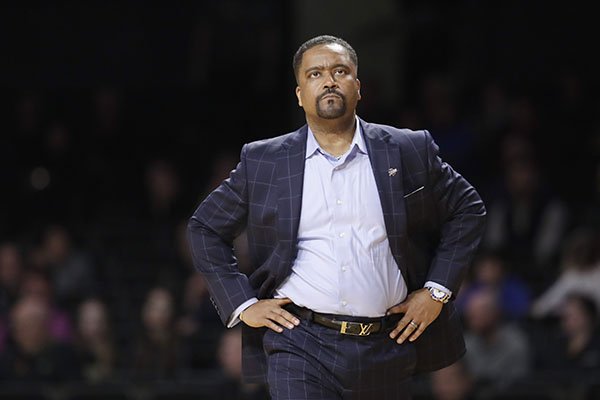 FAYETTEVILLE -- The University of Arkansas basketball team will face a former SEC head coach or assistant coach for the fourth consecutive game when the Razorbacks take on Tulsa today in Walton Arena.

Frank Haith, in his sixth season as Tulsa's coach, previously was the coach at Missouri for three seasons.

Horn was 2-2 against Arkansas as South Carolina's coach from the 2008-09 through 2011-12 seasons. His Gamecocks beat the Razorbacks twice at home and lost to them twice in Walton Arena.

Figger, who briefly was John Pelphrey's director of basketball operations at Arkansas in the spring of 2007 before he joined Martin at Kansas State, was with South Carolina teams that went 3-4 against Arkansas from the 2012-13 through 2016-17 seasons.

The Razorbacks beat Austin Peay 69-61 on Dec. 3 and also beat the Governors 76-65 last season in Figgers' second year on the job.

Tulsa guard Lawson Korita is a 6-5 senior from Little Rock who played at Pulaski Academy. He has played in nine games this season, including four starts, and is averaging 6.0 points and 1.9 rebounds in 21.4 minutes. He has hit 12 of 30 three-pointers.

Korita has played in 97 career games for the Golden Hurricane with 51 starts and is averaging 4.0 points.

Sam Pittman, the Razorbacks' new football coach, will be introduced to the crowd at today's game during the TV timeout with less than four minutes left in the first half.

"I don't know anything about football, but I think everybody in the department is really happy and excited," Arkansas Coach Eric Musselman said of Pittman's hiring.

Musselman said after Thursday's practice that he hadn't talked yet with Pittman.

"We've left him alone," Musselman said. "He's been out recruiting and trying to get his staff together, so he certainly doesn't need to talk to the basketball coach right now.

"But I look forward to developing a relationship with him. I've read and watched all the stuff you guys [in the media] have done and am really intrigued by some of the things that he does in recruiting. To hear about the impact that he has with recruits' parents and those type things are important.

"Every article and every media interview that comes out, I'm sending it to our staff talking about him relentlessly recruiting. Certainly I've learned a lot from afar watching some of the stuff that he's done in a short amount of time."

Sophomore guard Desi Sills has hit 5 of 12 three-pointers in the past two games against Austin Peay and Western Kentucky after going 2 of 30 in the first seven games.

"I've just been so impressed with how when the shots weren't falling, he got to the basket," Coach Eric Musselman said of Sills averaging 9.3 points during the first seven games. "Now teams are kind of playing him for the dribble drive, and that's opened up his three-point shooting where people aren't crowding him as much."

Sills scored a career-high 20 points at Western Kentucky. He hit 7 of 11 shots, including 3 of 7 three-pointers.

"He had a career night the other night," Musselman said. "Hopefully that really, really helps his confidence.

"You look at the last two games, and he's shooting a good percentage. Even the ones he misses, you think they're going in."

Jamario Bell, a 6-5, 250-pound senior, joined the Arkansas basketball team two weeks ago after finishing his career with the football team as a defensive end.

"Jamario's been great," Coach Eric Musselman said. "We need somebody in practice that's got enthusiasm. He's slowly picking up some of our offensive and defensive concepts."

Musselman was asked how he would feel about playing Bell should an emergency situation arise.

"I know he'd go in there and bang, and we could use his fouls for sure," Musselman said. "He's not afraid of contact. He sets a really good screen."

Musselman said Bell is physical even in noncontact work.

"I'm like, 'Jamario, we're not going live right now, man,' " Musselman said. "But he seeks contact. He's had a great attitude for sure. I think he's made our practices a lot better."

Platt, the Golden Hurricane's director of player development, had a 56-59 record in four seasons as coach of the University of Arkansas at Little Rock from 1990-91 through 1993-94.

Deets, Tulsa's director of athletic performance, was Arkansas' strength and conditioning coach from the 2011-12 through 2013-14 seasons.

Arkansas will be the third team from the state that Tulsa has faced this season. Previously, the Golden Hurricane beat the University of Arkansas-Pine Bluff 72-39 and lost to Arkansas State University 66-63. Both games were in Tulsa.

The Razorbacks and Golden Hurricane are playing each other for the first time since Jan. 2, 2007, when Arkansas won 68-59 in Walton Arena. Arkansas leads the series 36-24, including 24-8 in Fayetteville.