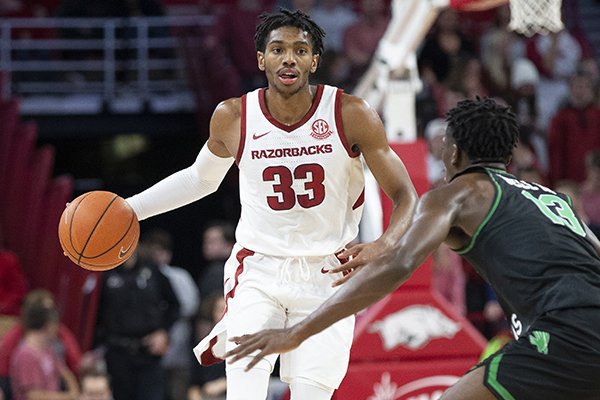 Arkansas guard Jimmy Whitt brings the ball up the floor during a game against North Texas on Tuesday, Nov. 12, 2019, in Fayetteville.

FAYETTEVILLE -- The University of Arkansas and Tulsa basketball teams will play for the first time in 12 seasons when they tip off at 12:30 p.m. today at Walton Arena, but there is plenty of familiarity between the coaching staffs and players.

CHALK TALK Arkansas guard Jimmy Whitt, a graduate transfer from SMU, averaged 9.0 points and 10.3 rebounds in three games against Tulsa the previous two seasons when he played for the Mustangs. He had a career-high 13 rebounds against the Golden Hurricane two years ago. … Tulsa Coach Frank Haith was 3-1 against Arkansas during the 2012-13 and 2013-14 season when he was Missouri’s coach. The Tigers joined the SEC in Haith’s second of three seasons at Missouri, where he was hired after Mike Anderson left to take the Arkansas job. … Arkansas and Tulsa have their 61st meeting today, but first since Jan. 2, 2007, when the Razorbacks beat the Golden Hurricane 68-59 in Walton Arena. … Arkansas and Tulsa both beat Austin Peay at home this season. The Razorbacks beat the Governors 69-61, and the Golden Hurricane beat them 72-65. … Arkansas State won 66-63 at Tulsa. The Golden Hurricane’s other loss was 73-59 at Texas-Arlington. … Arkansas is 24-8 against Tulsa in Fayetteville.

"Tulsa plays hard, aggressive," said Musselman, who has led Arkansas to an 8-1 start. "They have a lot of pieces back.

"Defensively, they look to try to create steals. They'll play probably 65% zone. Usually start games off in some man and then go zone.

"They're deep. They play a lot of different guys. They have a lot of contributors. A tough, hard-nosed team."

Razorbacks senior guard Jimmy Whitt, a graduate transfer from SMU, faced Tulsa three times in the American Athletic Conference and played on the same AAU team as Horne and Jackson.

Whitt helped the Mustangs go 2-1 against Tulsa in the previous two seasons. He averaged 9.0 points and 10.3 rebounds in those games.

"They've always been a good team, really well-coached," Whitt said. "I know them well. It'll be a good matchup, for sure."

Tulsa 6-6 junior guard Brandon Rachal also knows what it's like to beat Arkansas in Walton Arena. He was an LSU freshman and scored six points -- shooting 3 of 3 -- when the Tigers won 75-54 at Arkansas in 2016.

Rachal, who played at Pearl River (Miss.) Community College last season, is averaging 15.3 points and 7.0 rebounds to lead the Golden Hurricane. He also has a team-high 22 steals.

"He's a really good player that's kind of a guy who creates offense and defense for them," Musselman said.

Tulsa already has a road victory over an SEC team this season. The Golden Hurricane won 67-58 at Vanderbilt on Nov. 30, which Whitt said got the Razorbacks' attention.

"For sure," Whitt said. "When a team like that is going into Vandy and was able to get the win, you know they're a threat.

"We don't want them to come in here and gain confidence at the beginning of the game. It's one of our points of emphasis to come out and play strong from the tip."

Arkansas is looking to bounce back from its first loss of the season when Western Kentucky beat the Razorbacks 86-79 in overtime last Saturday in Bowling Green, Ky.

"I hope we'll bounce back like we have in the past, which is with a lot of energy, a lot of determination, a lot of toughness," Musselman said. "We lost on Saturday, and I wish we would have played Sunday, Monday, Tuesday. But we had a week between games, and hopefully we still have that bad taste in our mouth even though it's been a little bit of time separating between the Western game and this game."

Musselman was asked whether he meant he wished the Razorbacks would have played on Sunday, Monday or Tuesday, not all three days.

"No. I wish we played all those days," he said. "I'm not a good loser. My wife's got me sleeping in the pool house until we win again."