Swanson and Ragnow part of player panel for weekend visitors 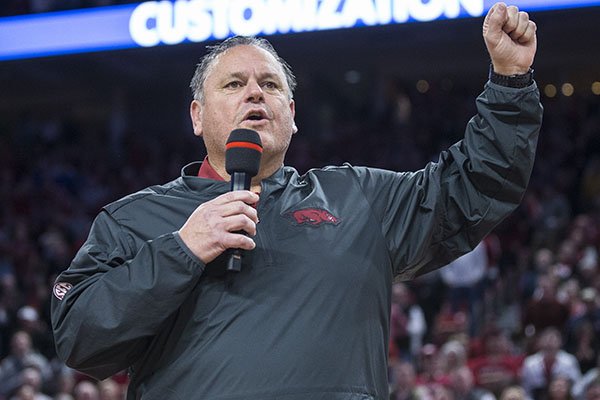 Player panels are a good way to give insight into college football programs when hosting on-campus visitors.

Player panels usually feature current players, but University of Arkansas coach Sam Pittman went a different route because only one Razorback had a previous relationship with him.

Senior offensive lineman Colton Jackson was recruited by Pittman and committed to the Razorbacks as a junior after attending an Arkansas camp and receiving a scholarship offer in 2013. He redshirted in 2015, Pittman’s final season at Arkansas as an assistant coach.

Former Razorbacks Travis Swanson and Frank Ragnow were also part of the panel.

Ragnow sent a pre-recorded video of his experience with Pittman and at Arkansas, while Swanson spoke in-person.

Ragnow was recruited and coached by Pittman for two seasons before being the 20th overall pick in first round of the 2018 NFL Draft by the Detroit Lions. Swanson was drafted by the Lions in the third round in 2014 and played five NFL seasons.

Swanson, who announced his retirement from the NFL in the spring, only played for Pittman for one season.

Bobby Allen, Arkansas’ director of high school and NFL relations, reached out to Swanson a few days before the Hogs hosted five prospect for official visits.

“My point of view was Pittman inherited me. He didn’t recruit me, so I don’t have any in-home recruiting stories, which I felt bad about because I just know how good they are from what I have heard,” Swanson said.

“I had to keep it pretty short. I tried to hit the cliff notes of everything because I could talk awhile,” Swanson said. “I really didn't have anything necessarily scripted and it seemed well received from the feedback I got.”

His time with Pittman was short, but the impact was strong.

“I only had, in the grand scheme of everything, about 10 actual months with him,” Swanson said. “I wish so much I would’ve had five years because of the impact he had on me in those 10 months and how he developed me not only on the field, but off the field and the trajectory that kind of set me on in my life with just with the opportunities it gave me in playing in the NFL.”

Swanson earned an offer from Arkansas after a good showing at a Razorback camp under former Coach Bobby Petrino. He told the recruits he had a chance to come back to the state and be involved in the Northwest Arkansas business community.

“I talked about the university and what this state did for me and the affect it had on me,” Swanson said. “I always wanted to end up back here and it’s now to a point with the connections I’ve made with my time at the university and playing for the program. I met so many people throughout the state that has allowed me to come back here and put down solid roots down and have a lot of connections and a solid network for really anything business related that I want to get into after football.”

One of Pittman’s favorite sayings was "don’t make a mountain out of a mole hill," something Swanson learned to focus on on the field and off.

“So don’t make something that’s so little in the grand scheme of things and make it this much bigger deal than what it actually is,” Swanson said. “You can apply a lot of things he teaches.”

Swanson recalled first meeting a veteran offensive lineman Garrett Reynolds while a rookie with the Lions.

“I asked where he had played and he said North Carolina and I just said, 'Sam Pittman,' and he just gave me this look and that’s all it took to kind of break the ice, and it was almost like we had known each other like 15 years,” Swanson said. “That’s just the kind of effect he has because he treats everyone the same way.”

Respect for Pittman is far reaching.

“If you treat people the right way and correct way and you’re a good person and genuine to who you are, then it will come full circle for you, and I think he is a very prime example of that,” Swanson said.