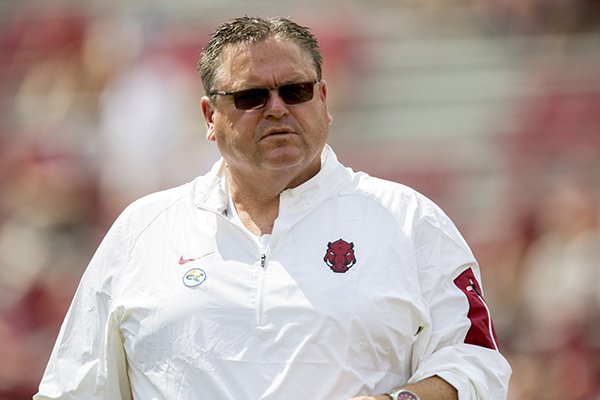 FAYETTEVILLE — New Arkansas head coach Sam Pittman held his first-ever national signing day on Wednesday and although he signed an SEC-low seven players, he walked away with a big smile on his face.

“I want to get the best players in America because as y’all know, I truly believe that Arkansas is the best place in America,” Pittman said. “I believe that, and so this next go around, there may be some guys that we’re going, ‘Hey, this guy’s a little light but has got great feet,’ or we may go that way a little bit more, we might not, but we’re basically trying to recruit guys that we think can come in here and challenge for a position early in their career.”

Pittman noted that he will hit the junior college ranks and also look at some graduate transfers to fill out the class.

“We certainly have to leave some scholarships available for transfers or grad transfers,” Pittman said. "Right now it doesn’t seem to be too big of a problem, you know? We will fix that when it comes. But, we obviously are in the transfer market at different positions.

“Junior college wise, I never want to go heavy junior college because I think we can build our team young. I just want the best players we can get, so if we can go into the junior colleges and get one, two or three outstanding players that we think can change our program immediately, you have to be right on that now, you have to be correct on your evaluation.

“I don’t think we’d ever sign a whole huge number of junior college players just because I believe you have to base your whole program out of freshmen and start in the state of Arkansas.”

Burrle and Hazen defensive end Blayne Toll (6-5, 244), one of three in-state signees along with Bryant linebacker Catrell Wallace (6-5, 210) and Jonesboro defensive end Jashaud Stewart (6-2, 222), are both slated to be early enrollees.

Slusher let Pittman know late on Tuesday night that he was heading to Fayetteville to play his college football and not Lincoln Nebraska or Eugene, Oregon.

“Myles Slusher committed to us last night at about a quarter till midnight,” Pittman said. “His decision was weighing on him. His parents came in here and himself this weekend. I had been recruiting Miles when I was at the University of Georgia.

“There’s a lot of excitement about him. He has speed. He comes from Broken Arrow. David Alexander is the head coach. They won the state his junior year. He has outstanding parents in Blanca and PJ. He was a good get for us.”

Pittman said he didn’t mind getting a call that late with good news.

“It’s awesome, man,” Pittman said. “You know, recruiting is awesome. It’s competition, you know. It’s selling you, it’s selling the university, it’s selling the state of Arkansas. Actually, I was driving home. And he called me on the phone, and usually if they call you at 11:45, it’s not to tell you they’re going to go someplace else. I’ve yet to ever get a player at his press conference that he didn’t tell me he was coming before the press conference.

“So, there’s always that little glimmer of hope. You always lose. He’s going to tell the team he’s going to. And so, last night when he told me, it was a great get for the university because he’s such a good kid, too. But we wanted him at Georgia. Obviously there was some really good teams on his list. I’m just glad that his parents are going to be able to see him play, that he’s an hour and 45 minutes away from them.”

Pittman is a fan of Slusher’s physicality.

“He’ll strike you pretty good,” Pittman said. “Going in there, we were really excited about him. We really don't look at who is recruiting somebody. We just either like him or we don't, and the way that you can make fewer mistakes, if you will, on your program is to get them on campus and get them to camp, because then you know what you're going to get. In the future I think we're going to be able to get kids like that on our campus and be able to recruit them a little bit longer than what we did this time. Arkansas will sell itself, and I think when we get these guys like this we can really know exactly what we're getting.”

Burrle was offered by the former Arkansas staff on August 1, but had been committed to Texas San-Antonio from June of 2018 until Dec. 2 of this year when the Roadrunners fired Frank Wilson.

“Well, we didn’t know a whole lot about him, to be honest with you, until we went into his school,” Pittman said. “…Then we were able to meet him and we sat down and watched his tape. To be honest with you, he can run and he’ll strike you. I had an opportunity to sit down with the young man for a while and he’s got plenty enough size.

“When Coach Odom got here we sat down and watched the tape on him and we liked a lot of things that he did,” Pittman said. “We think that he can play a Will linebacker, possibly a Nickel/Sam - maybe even a strong safety because he has good speed and we are very, very excited that we were able to get him.”

The additions of Odom and offensive line coach Brad Davis from Missouri were factors in Arkansas getting the flips from Missouri pledges Curry and Johnson.

“He (Curry) came this past weekend on an official visit,” Pittman said. “He was at one time committed to the University of Missouri. And when Coach Davis came over he certainly went after him. He’s got everything that we want. He has size. He has good feet. He has weight. We just thought he would fit into what an Arkansas offensive lineman should be.

“So Coach Brad Davis did a good job of recruiting him and he was here this weekend and just very, very excited about him. I think he’ll be a good player for us.”

Johnson visited Missouri last weekend, but decided on Arkansas during that time.

He has rushed for over 2,400 yards and 40 touchdowns the last two seasons.

“Dominique Johnson is a big physical running back out of Crowley Texas,” Pittman said. “He had been on some different trips. He was another one that had been involved with Missouri. We felt like we needed a big, physical back. So we went after him, and he was ecstatic to be a part of the University of Arkansas. He committed to us over the last day or two.”