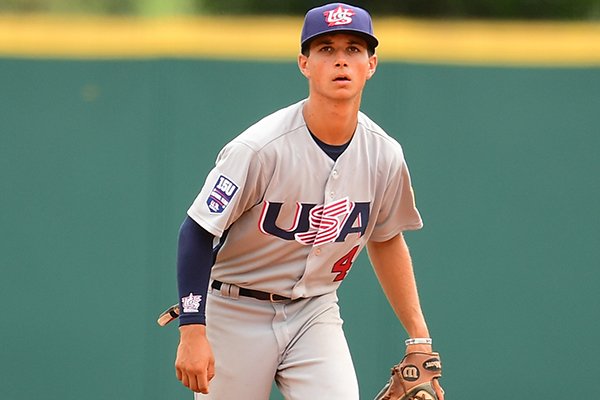 Robert Moore is shown during a game with Team USA.

FAYETTEVILLE — Arkansas’ baseball program is adding the equivalent of a five-star recruit in time for the 2020 season.

Robert Moore, a switch hitter who is rated the No. 41 high school senior in the country by Baseball America, announced last week that he will graduate early from Shawnee (Kan.) Mission East High School and enroll at Arkansas for the spring semester. Moore is a middle infielder.

“He can really, really defend - and that’s not to take away from his bat whatsoever, because he’s good at the plate - but he can really defend,” Arkansas assistant coach Nate Thompson said. “In my opinion, he’s the best defender in the 2020 class.”

Moore is one of several top prospects in the Razorbacks’ latest signing class that is ranked No. 3 nationally by Baseball America. By enrolling early, Moore has taken himself out of next year’s MLB Draft, which means he will be part of Arkansas’ program for at least the next three seasons, barring a transfer.

“It still works out because I’ll be a 20-year-old junior when I finish my time at Arkansas,” Moore said. “It just gets the ball rolling a little quicker. I’ve talked to a lot of scouts and they did have me very high in the draft. It was a little hard to turn that down because my dream has been to play professional baseball. But I feel like I had a better opportunity to come to campus and start the journey of college baseball.

“I will say this: it was actually harder to turn down playing my senior year with my high school team and kids I grew up with, and a coach that I really respect, than it was to take my name out of the draft.”

Moore committed to Arkansas in 2018 shortly after the Razorbacks lost to Oregon State in the finals of the College World Series. Around the same time Thompson and Arkansas coach Dave Van Horn began to discuss with him the possibility of enrolling early. Thompson said the pitch was to “fast track” Moore’s development.

“At the end of the day it was Robert’s move,” Thompson said. “We wanted him to want this.”

Moore at first declined the option to enroll early, but he said he began to rethink the decision this fall.

“Since I had the courses to do it and the high school requirements, I qualified for early acceptance at Arkansas,” Moore said. “Every situation is different, but this is probably what is best for me. I just went ahead and did it…. It just made sense in my situation.”

At Arkansas, Moore will join a roster that includes a projected first-round draft pick in shortstop Casey Martin, as well as last year's starting second baseman Jacob Nesbit. Martin hosted Moore on his first recruiting visit two years ago, and Moore said he is looking forward to learning from him.

“He’s going to be hopefully a top 25 pick in the country this year,” Moore said. “I mean, there are only 25 guys in the world like that. I get a chance to see what he does on a daily basis.”