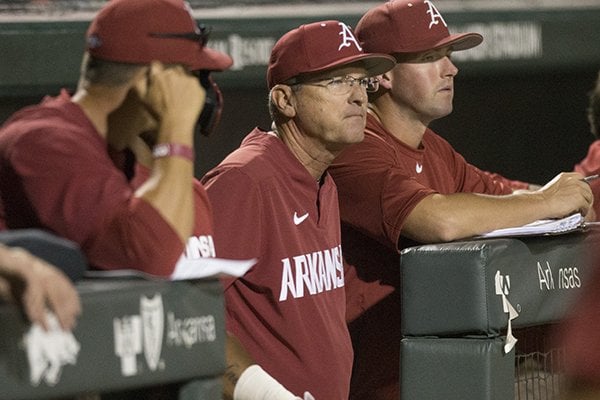 Arkansas coach Dave Van Horn watches during a scrimmage against Oklahoma on Friday, Sept. 20, 2019, in Fayetteville.

FAYETTEVILLE — Arkansas’ midweek game against Oklahoma in March has been moved to Oklahoma City.

It will be the second meeting in 2020 between the Razorbacks and Sooners. The teams are scheduled to play Feb. 28 at Minute Maid Park in Houston as part of the Shriners Hospitals for Children College Classic.

Arkansas is scheduled to play five games at pro ballparks in 2020 - three at Minute Maid Park, the game in Oklahoma City and a game against Arkansas-Pine Bluff at Dickey-Stephens Park in North Little Rock.

The Razorbacks are scheduled to begin the season Feb. 14 with the first game in a three-game series against Eastern Illinois at Baum-Walker Stadium in Fayetteville.