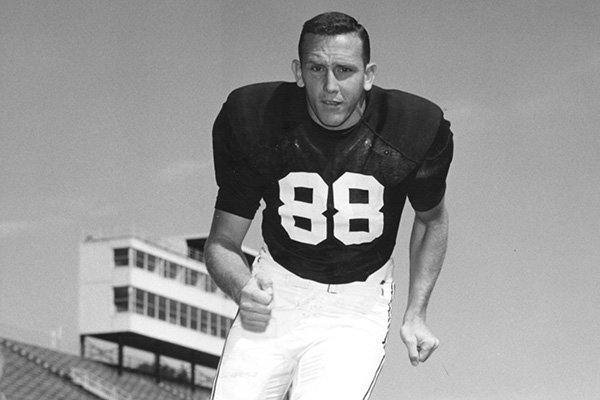 It was early in the summer after my freshman year in college. I was working a construction job during the week, building a blue jeans plant on the highway to Pine Bluff.

On weekends, I worked at Riverdale Golf Club for my Uncle Bill. The odd jobs included picking up the range balls at the back end of the practice range, an area that was muddied with water pipe construction. The balls had to be retrieved by hand.

There was a surprise break in that grueling job in 100-degree heat next to the Arkansas River on that now-closed golf course near downtown Little Rock. My uncle drove to my soupy spot to relieve me.

“I have a customer who asks that you join him for nine holes of golf,” Uncle Bill said. “He wants a playing lesson and you are going to give it.”

After riding back to the first tee with my uncle, I was introduced to Jerry Lamb, one of my heroes.

As a college golfer, I didn’t really expect to be paid for instruction. I didn’t that day, or on several other similar afternoons with Jerry that summer. Jerry did suggest that we play for a few dollars, knowing that I’d beat him by 10 strokes in our nine-hole game.

When I got home that night, it was a great thrill for me to explain to my father that I’d spent the last few hours of the day with a Razorback legend, the tight end from the 1964 Arkansas team that won the national title. It wasn’t a surprise to learn my father had set it up.

That’s when I started learning some of the old stories about Lamb, his quiet nature on and off the field, but fierce competitive spirit and slick athletic ability.

“Quickness off the ball and great hands,” was the way Harold Horton described Lamb this weekend when we both heard about the passing of the great Razorback from Smiley High School in Houston, Texas. Horton and I were guests of Wayne Reed at Steel Wings Duck Club, the palace of a lodge between Carlisle and Humnoke owned by Tom Schueck of Lexicon Steel.

Horton was three years ahead of Lamb at Arkansas and friends for the last 60 years. He and I shared Lamb stories in between hunts earlier in the week. I told my fun golf outings and what I’d heard from my father.

“He was a great gentleman and one of our finest players at Arkansas,” Horton said. “I wasn’t aware that he was much of a golfer, though.”

True, especially so if he was asking me for instruction. We both laughed.

Actually, he took coaching well. After fixing grip and stance, we worked on tempo and shoulder turns. He never played enough to work through the kinks.

But he was a natural athlete. Jerry Welch, a teammate with Lamb at Arkansas, marveled at his ability to catch the ball in a way that not many had seen at Arkansas.

“Most of our receivers were catching the ball against their chest, cradling it in,” Welch said. “Not Jerry. He caught the ball with his hands extended. He was just natural in his movement, athletic and graceful.”

Lamb played in the offensive line, often paired with Welch on the strong side.

“We’d have double team blocks, and even at 185 pounds, Jerry packed a punch,” Welch said. “You could count on him to do his job. He was athletic, but played with a physical stature that you didn’t really believe because he just wasn’t real big.

“Without a doubt when I was at Arkansas, Jerry was the best natural. He made some big catches.”

My dad, the late Orville Henry, was delighted when I began to ask Lamb questions. First, he explained that he’d set up the golf games with the two of us.

“I knew you were going to see how a gentleman conducted himself,” my dad said. “Jerry was always that. You probably can’t believe that he battled those big Texas ends as a tight end.”

That was what stood out. I met Jerry after he had lost some of his overall size. By the time I played golf with him, I doubt he was over 165 pounds.

“Just a quality person and he played so hard that he didn’t have to be big,” Horton said. “His toughness was never in question.”

Lamb was an All-Southwest Conference player as a junior and senior, and as a sophomore in 1962 was the league's newcomer of the year. During an era when Arkansas didn't pass much he caught 52 passes for 698 yards and 8 touchdowns.

Lamb’s quiet nature was important for one of the stories my dad shared in 1973 and Welch repeated this week. Lamb stepped up in the locker room after players asked the coaches to leave when the Hogs were struggling to put away Texas Tech in Lubbock to end the 1964 regular season.

The Hogs led by just 3-0 at halftime. Frank Broyles and Wilson Matthews had both delivered passionate talks when the seniors wanted a chance.

“I think there was one other time that year when there was a players only talk,” Welch said. “That day at Lubbock, Jerry Lamb wanted to be first. He never talked, but he got after our butt pretty good and when we went out there it wasn’t really competitive again. We only won 17-0, but Tech wasn’t in the game that second half.”

My father said Lamb’s message that day was “stern” and “to the point.” Welch said, “Jerry didn’t talk much but because of how hard and well he played, when he did, it was important. If he gave you a biting comment about how you were playing, you took it because he always did his job.”

There were youngsters – under 50 - at the duck hunt who had no idea about who we were talking about. It’s good to tell stories of legends like Lamb.

“It is because our group is dwindling,” Welch said. “I looked at a team picture recently and counted off 15 who aren’t with us anymore. It’s happening quickly now, too.”

It was a sober reminder to hug your buddies. I had four at the duck club, all like family. There was Reed, Horton and my college roommates, Leo Crafton and Hal Hunnicutt. Leo and I played on the golf team at UCA. Leo lettered as a last-minute replacement in the conference tournament just before he left for dental school. His scores counted both days of the tournament.

We talked about those times, with Horton, a former UCA football coach smiling as we discussed golf outings from 45 years ago like they were yesterday. Those stories were just as fun as the duck hunts, one of them an outstanding seven limit morning.

“That’s what I have with Jerry Lamb,” Horton said. “You two remember the times like they just happened. I was a senior when he was a freshman and I can see Jerry making those blocks at tight end – or a great catch - like it was yesterday.”

Welch said, “That’s the way it is with our bunch, you can be apart, but then when you have reunions or we will get together for a funeral, it’s like we’ve never been apart.”

I wish I’d framed the $5 given to me for that bet won from Jerry Lamb in 1973. I’d point to it while telling stories of a great gentleman.