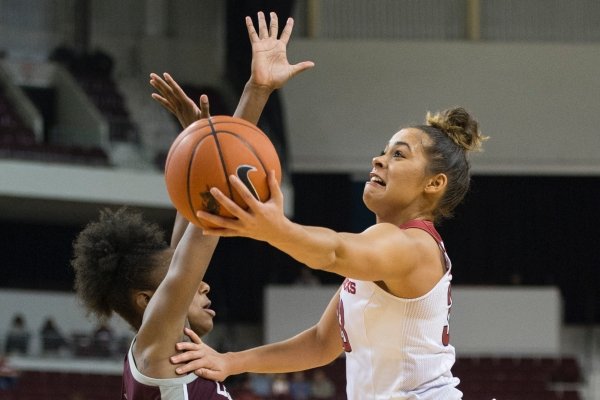 UALR versus Arkansas during the game at Simmons Bank Arena in North Little Rock on December 21, 2019. View more images at arkansasonline.com/ualruawbb/

NORTH LITTLE ROCK — Chelsea Dungee and Alexis Tolefree scored 21 points apiece and No. 21 Arkansas cruised to an 86-53 win in its second-ever meeting with Arkansas-Little Rock on Saturday.

A'Tyanna Gaulden added 15 points and Amber Ramirez had 12 on four 3-pointers for the Razorbacks (11-1), who won their sixth straight.

The game was part of a doubleheader with the Razorback men's team at Simmons Bank Arena.

Dungee hit two 3-pointers in the first quarter to help the Razorbacks open a 23-11 lead. The redshirt junior who started her career at Oklahoma reached 1,000 career points at Arkansas with her final points, a three-point play early in the fourth quarter.

The Razorbacks led 41-27 at the half and outscored UALR 20-12 in the third quarter to break it open.

Arkansas held the Trojans to 34% shooting, forced 19 turnovers and had a 41-32 rebounding advantage, led by Dungee's eight.

Angelique Francis had 15 points for Little Rock (2-8) and Teal Battle had 12.