UA on right side of 'history' 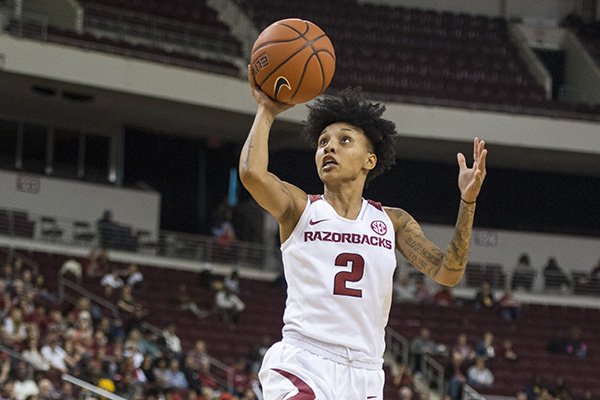 It might seem odd to see both coaches smiling after an 86-53 ballgame, but that was the case Saturday afternoon at Simmons Bank Arena in North Little Rock.

Count coaches Joe Foley of UALR and Mike Neighbors of Arkansas among them.

"That game was a lot of fun," said Foley, the losing coach. "It was a good thing. It's history."

Neighbors, the winning coach, is both a friend and admirer of Foley.

"I think it was a great day for women's basketball in the state," Neighbors said, "and I'm just glad to be part of it."

The game marked the second meeting between the two schools in women's basketball, and the first matchup in 42 years. It's a notable event as Arkansas' policy of not playing other in-state schools in athletics fades into oblivion.

Neighbors said the second meeting between the schools is already being planned for next December, and he did not rule out the possibility of the teams playing a home-and-home series -- at Walton Arena in Fayetteville and UALR's Jack Stephens Center -- at some point down the road.

"Our game needs it," Neighbors said. "We have to be united. We've got to give people a reason to notice. Games like this, you kind of have to notice."

The Razorbacks scored the game's first eight points, led 23-11 after one quarter and 43-29 at halftime behind the play of senior Alexis Tolefree (21 points, 3 assists, 2 steals, 1 block) and junior Chelsea Dungee (21 points, 8 rebounds).

Tolefree, from Conway, and Dungee, a transfer from Oklahoma, combined for 6 of Arkansas' 9 three-point baskets, and they mixed speed and power to pull away from the Trojans.

"They can put points on the board in a hurry."

One such flurry occurred early in the third quarter after two baskets by UALR's Kyra Collier and two free throws from freshman Angelique Francis cut Arkansas' lead to 43-33 with 8:13 to play in the quarter.

Foley smiled when asked whether he thought his Trojans (2-8) were about to make a game of it.

"Well, I knew their depth was going to get us," Foley said of the Razorbacks, who outscored the Trojans 30-4 in bench points. "We were playing extremely hard. I was afraid it might catch up with us, and it did."

Part of the reason Francis played so much was because of an ankle injury to sophomore Krystan Vornes, who was limited to 15 minutes.

Another reason for the use of the true freshmen, Foley said, is that they had showed over the past few weeks they were ready to play.

"Seeing those two freshmen do what they did today gives me hope come January and February," Foley said.

Neighbors said there is no doubt UALR will be ready to make one of its noted runs to the NCAA Tournament by the time the Sun Belt Conference Tournament rolls around.

"This is a team that's going to do exactly what they've been doing the past three years, go about 22-3 between now and the end of the year and up in the NCAA Tournament," Neighbors said. "They're starting to figure things out. I'm glad it wasn't today."

Neighbors said he had no qualms with the way the Razorbacks played, noting the play of A'Tyanna Gaulden (15 points, 6 rebounds in 21 minutes) off the bench and the return from injury of Kiara Williams (2 points, 4 rebounds in 11 minutes).

"We really shot it well," Neighbors said of the Razorbacks, who made 29 of 61 from the field, including 9 of 21 on three-point attempts. They also made 19 of 22 free throws. "We played well."

The victory did not come without pregame angst for Neighbors, who said the Razorbacks shot more airballs than baskets during Friday's walk-through.

"I'd rather be audited by the IRS, have a colonoscopy and a dentist appointment on the same day than play against a team coached by Joe Foley," Neighbors said.