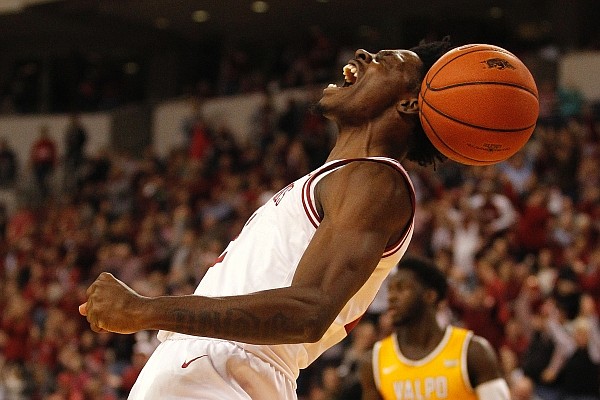 Arkansas’ Adrio Bailey (2) celebrates after a dunk during the first half of the Razorbacks' 72-68 win over Valparaiso on Saturday, Dec. 21, 2019, at Simmons Bank Arena in North Little Rock.

FAYETTEVILLE — Adrio Bailey did not expect the video of his impressive block to seal Arkansas' 72-68 win over Valparaiso last Saturday to gain as much traction as it did.

On Dec. 23, the Twitter account NCAA March Madness posted a minute-long montage of many of the best plays in college basketball to that point. Bailey's highlight-reel rejection made up the final nine seconds of the clip.

"Coach Muss sent (the tweet) to me. He was like, 'All your work is gradually catching up with you.' It means a lot."

Bailey's effort, energy and attention to detail on the defensive end is certainly paying dividends. Arkansas has allowed just .76 points per possession through 11 games (866 possessions), per HoopLens, and ranks in the top 10 in defensive efficiency, according to KenPom.

Bailey is a big reason why.

The senior, according to SportsReference, owns the best defensive rating - a measure of how many points a player allowed per 100 possessions he individually faced while on the court - in the nation at 74.6. Also in the top 10 are a number of players on KenPom top 20 defenses, including Virginia's Mamadi Diakite and Jay Huff, and San Diego State's Nathan Mensah.

Razorbacks coach Eric Musselman said Friday that Bailey has been paramount to Arkansas' success defending the interior and how it plays the perimeter, too.

"Adrio has done a great job," Musselman said. "Every night he’s guarding somebody that’s a little bit bigger than him and maybe a guy that weighs a little bit more, but certainly we feel like Adrio has incredibly quick feet and he's got quick hands and anticipation. He really follows the scouting report.

"It’s really interesting. On Christmas I sent him some stuff on Indiana’s bigs and he came back with some questions on text that were pretty cool because I didn’t think we’d get to talk about it until later that day when we got ready for practice."

Bailey is third in the SEC in steals with 21 and fifth with 20 blocked shots. He is the only forward in the league currently in the top 10 in steals.

Bailey also has career highs in block rate and steal rate, according to KenPom. He is blocking 7.9 percent of opponents' 2-point attempts when in the lineup, which ranks 60th nationally and fifth in the SEC. Bailey's steal percentage (4.4) is the second highest in the conference among players who have played at least 40 percent of his team's minutes.

Musselman drew a comparison to one of his former NBA players.

"I think he’s got some qualities that maybe a guy like Ron Artest had when we played Ron as an undersized 4 or even an undersized 5," he said. "Both guys understand fronting and things like that."

Bailey, who has flashed great athleticism throughout his career, including a one-handed dunk at Indiana in Arkansas' season-ending loss in March, has a knack for impressive sequences on both ends of the floor.

Although he was whistled for basket interference, Musselman recalled being stunned by Bailey skying for a putback dunk off a missed free throw at Western Kentucky.

"I thought he made an incredible play," Musselman said. "He’s come up with some super-human plays in really, really clutch situations that you kind of sit back and say, ‘Wow. How did that happen?' And then you sit back and watch it on video and it’s even more impressive."

Desi Sills, who injured his left knee in the win over Valparaiso and is expected to return to action Sunday against the Hoosiers in Assembly Hall, said Bailey's play this season has been vital to the Razorbacks' 10-1 start.

"Man, Adrio Bailey and his ability to do stuff on the defensive end has amazed me," Sills added. "He’ll pick up the help side for another man. When we get beat, we know he’s got our back."