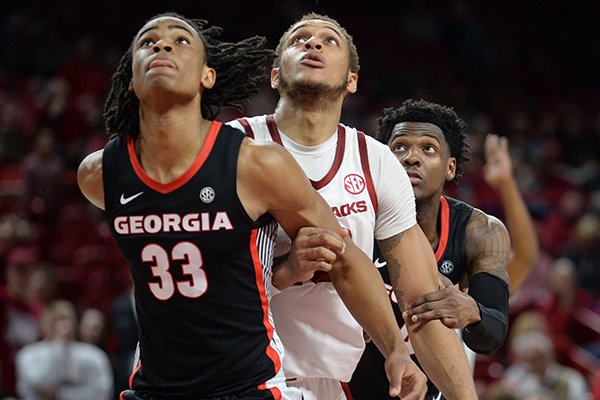 FAYETTEVILLE -- LSU racked up 21 offensive rebounds that led to 21 second-chance points in its 72-57 mashing of Texas A&M on Wednesday.

University of Arkansas Coach Mike Anderson was watching that game, the day after his Razorbacks allowed Georgia 23 offensive rebounds and a plus-24 rebounding margin in a 70-60 victory over the Bulldogs.

"Our guards have got to rebound the basketball," Anderson said. "I thought that's how [LSU] won the game here. I though the extra effort ... we've got to be better."

The Razorbacks will be in search of a better rebounding effort Saturday when they travel to Baton Rouge for their first rematch of the season.

LSU outlasted the Razorbacks 94-88 in overtime at Walton Arena on Jan. 12, outrebounding the Hogs 36-31 along the way in a battle between two hot-shooting teams. Arkansas managed to edge the Tigers 16-15 in second-chance points and will probably have to keep it close on that statistic to knock off LSU, which has won 10 games in a row.

"We definitely have got to eliminate LSU from getting to the boards, because when you get offensive rebounds you tend to foul," Anderson said. "That's when you put them on the free throw line.

"We certainly know it's got to be all hands on deck -- guards, forward, Daniel. We've got to be really good on the glass."

LSU went 7-0 for the month of January. It marked only the second time since 1954 the Tigers have had an unbeaten January, joining the 1981 team, which reached the Final Four.

LSU sports an 18-game winning streak at the Maravich Assembly Center, the second-longest in the history of the arena. That streak dates to a 61-60 loss to Georgia last Jan. 16. A 94-86 victory over Arkansas on Feb. 3 was the second victory for LSU in its 18-game home winning streak.

The Tigers are also riding a 10-game winning streak, the longest by LSU since the 2009 team also reeled off 10 in a row against SEC opponents.

Arkansas Coach Mike Anderson is hoping freshman sharpshooter Isaiah Joe can return to form after being slowed the last couple of games by an illness.

Joe had averaged 19 points per game over a three-game span against Tennessee, Ole Miss and Missouri before going under the weather.

Joe had 5 points on 1-of-6 shooting, including 0 of 5 from three-point range, in a 67-64 loss at Texas Tech on Saturday, then had 3 points on 1-of-4 shooting in a 70-60 victory over Georgia. Joe's only field goal, a three-pointer from the right corner, gave Arkansas a 55-52 lead it would not relinquish heading down the stretch.

"We had a day off yesterday so hopefully he got a chance to recuperate a little better, get some food in him," Anderson said. "Hopefully he's over the virus. Hopefully that's what it is."

Joe is second in the SEC with 43.1 percent three-point shooting.

Anderson said it would be big to get Joe rolling again to complement guard Mason Jones and center Daniel Gafford.

"We've got Mason going," Anderson said. "I think having another guy, one of your leading shooters in conference play, can open up the floor so we can utilize Dan. Because people are doubling and tripling him."

LSU guard Tremont Waters is a leading candidate for SEC player of the week after torching Texas A&M for 36 points on 11-of-18 shooting on Wednesday, including 6 of 10 from three-point range.

The sophomore guard leads the Tigers with 15.3 points per game.

"Obviously the guy that's guarding him has to certainly be in position with him, but you have to have multiple people," Arkansas Coach Mike Anderson said. "You have to build a wall when he comes in there.

"His vision is ... it's stuff you can't teach. He has great feel, great instincts, great feel for the game and he makes his teammates better. He knows when to get the ball to them."

"He controlled the tempo here I thought," Anderson said.

The Razorbacks have gotten hot in February consistently under Coach Mike Anderson with a 29-11 record in the month over the last five years.

The Razorbacks are 3-2 against LSU, Saturday's foe, in February the last five years.

The Razorbacks have struggled to get out of the gate in recent games, falling behind sometimes by substantial margins in the early stages of their last seven games.

Arkansas got behind Georgia 11-2 and Missouri 14-2 in its last two home games. The Hogs never led in regulation and got behind by as many as 13 points in their 94-88 overtime loss to LSU earlier this season.

Arkansas Coach Mike Anderson said a faster start against LSU is a must.

"I think that's going to be a big key," he said. "We have to come out and execute. I thought here against Georgia, we came out just playing to play. It was kind of like we had a game plan, but we didn't play to that plan.

Anderson said the second unit, led by guard Desi Sills, injected a spark against the Bulldogs.

"The energy on defense started with Desi and that group there," he said. "All of a sudden, now we've got the game going up and down the floor and the shots are getting a little easier, coming a little bit faster. We're cutting to the basket, got much better ball movement offensively. But it starts at the defensive end."

Arkansas junior Adrio Bailey, a native of Campti, La., will play in his home state Saturday.

Bailey has scored eight points in back-to-back games for the first time since he hit for 10 points in consecutive victories over Florida International and Colorado State.

Bailey scored eight points on 3 of 7 shooting against LSU on Jan. 12 at Walton Arena.

Bailey started in his first trip to the Maravich Center as a freshman, scoring 2 points on 1 of 2 shooting in 9 minutes in a 78-70 Arkansas victory.