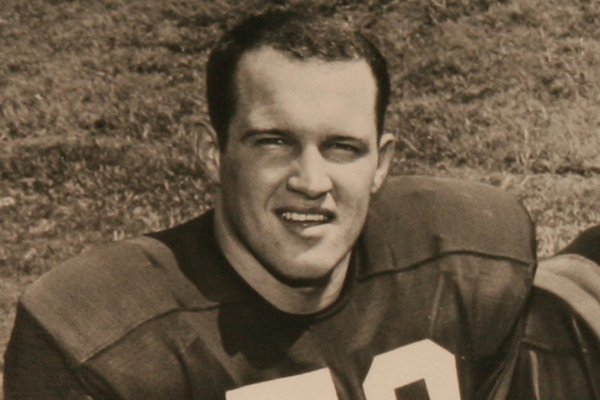 Glen Ray Hines was a starter on Arkansas' offensive line on the Razorbacks' Southwest Conference championship teams in 1964 and 1965.

FAYETTEVILLE — Jerry Welch, who played alongside Glen Ray Hines on the offensive line for the University of Arkansas’ 11-0 football team in 1964, recalled a common complaint from opposing coaches.

“I remember the other coaches kept saying that Glen Ray was offsides on every play,” Welch said. “But when we looked at the film, he wasn’t ever offsides. He was just so quick off the ball, and amazingly quick for his size.”

Hines used his size —6-5 and 235 pounds at Arkansas — and quickness to become a two-time All-Southwest Conference tackle in 1964-65 and a consensus All-American as a senior in 1965.

The El Dorado native died on Friday in Fayetteville in hospice care. He was 75.

A member of the Razorbacks’ All-Century Team that was announced in 1994 and the All-Decade Team for the 1960s, Hines also played eight seasons in the AFL and NFL with the Houston Oilers, New Orleans Saints and Pittsburgh Steelers from 1966-73.

“Glen Ray was just a gentle giant, but he was very tough,” said Ken Hatfield, a star defensive back and punt returner for the Razorbacks from 1962-64 and Arkansas’ head coach from 1984-89. “He gave you all he had all the time in practice and in games.

“He was an excellent teammate and just a tremendous person. We’re going to miss him a lot.

“As a player, he didn’t say much. He was a quiet guy, but he led by example.”

Hines anchored the offensive line for Arkansas teams that went a combined 21-1 in 1964 and 1965 and won a share of the 1964 national championship with Alabama.

“We ran behind Glen Ray a lot,” Welch said. “He was stubborn as hell and he had a lot of pride. And he truly applied himself to his craft.

“Back in the day, he was a big ol’ guy. Not so much now I don’t guess, but back then he was really big for a college football player and he gave defenses a hard time.”

The Houston Post named Hines the SWC’s most outstanding player in 1965 and he was selected to the SWC All-Time team in 1996. In 2005 Football Digest named Hines to the Oilers’ all-time team.

As a pro player, Hines bulked up to 275 pounds and was a model of consistency. He never missed a game in eight seasons before retiring in 1973. He played in 115 consecutive games, including three playoff games.

“I’m not surprised Glen Ray never missed a game,” Hatfield said. “He was so consistent and steady. He was he kind of guy everyone wants to have on their team, because you knew he’d always be there for you.”